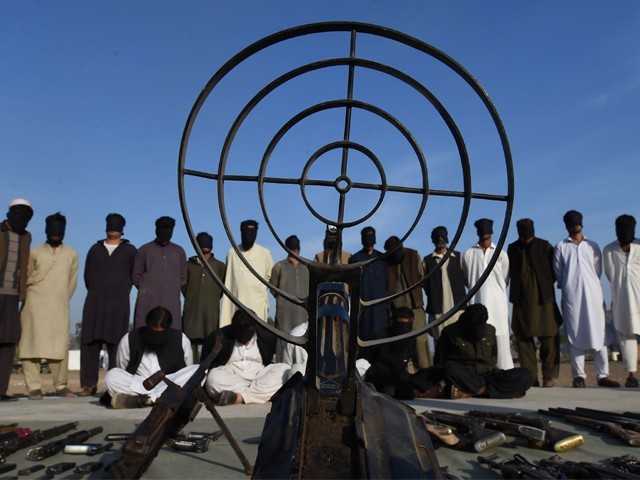 Arrested suspected militants and their recovered weapons are presented to the media by Pakistani paramilitary forces at a security compound in the Jamrud area of the Khyber Agency tribal area on March 3, 2017, during the ongoing military 'Operation Radd-ul-Fassad'. PHOTO: AFP

Whilst our civilian rulers have borne significant calumny for their dismal governance since the return of the democratic regime in 2008, there remain some feathers in the cap they can yet point to when juxtaposed with their military counterparts.

Take the 18th Constitutional amendment for example. Since independence, successive military regimes have sought to consolidate power in the centre, perpetrating a phantom federation which in turn fuelled discontent and separatist-ism throughout the smaller provinces. The unitary propensity of the establishment also played a vital role in the East Pakistan debacle in 1971. The 18th amendment represented a break from this past, bringing about an inclusive administrative system by devolving administrative rights to the provinces themselves.

The substantive effects of the legislation and its truly federal spirit demonstrated great foresight and political acumen on the part of the democratic leadership. One could be forgiven for hoping that the proposed Federally Administered Tribal Areas (FATA) reforms would be a step in the similar direction of allowing the right of self-governance to hitherto neglected regions.

The reforms recommended by the FATA reforms committee pertain to a 10-year integration program which allows for a repeal of the much denounced Frontier Crimes Regulation (FCR) in favour of the Riwaj Act. The act is intended to extend Supreme Court and High Court jurisdictions to FATA, as well as abolishing the abhorrent principle of collective punishment under the FCR. Most importantly, FATA will be merged with Khyber Pakhtunkhwa (K-P), allowing the population to elect fully endowed representatives in the national legislature achieving a level of self-governance previously denied under Article 247 of the Constitution.

Whilst the changes envisaged in the Riwaj Act remained far from perfect by allowing continued legal cover for tribal jirgas and sustaining certain anti-female customs, they nonetheless represented a significant and much awaited step in the right direction.

Thus, the subsequent shelving of an agenda of national significance over the disagreement of the Jamiat Ulema-e-Islam-Fazal (JUI-F) chief Maulana Fazlur Rehman, a man with a scarcely meagre representation in both the national and provincial legislatures, exposes the congenital myopia of the current regime, giving a lie to their flatulent claims of enlightenment.

The national significance of FATA and the profound depths of the ruling class’ failure must be considered in cognisance of an appropriate historical background. When the British sought to limit the megalomaniacal schemes of Russian expansionism in the late 19th century, five agencies along the border of Afghanistan were carved up to form a buffer zone and a second layer of defence (the first one being Afghanistan) from the Czarist empire. The British were rather reluctant to govern the territory, seeing little economic rewards, and thus settled for exercising lose control over the area in return for the obedience of the tribal leaders whom they bestowed with hefty patronage.

To buttress this strategy, the myth of the ‘fiercely independent’ people of FATA was incubated, which remains a pervasive exposition even today. But are the people of FATA still, or were they ever, truly as autonomous as we were made to believe, or is the notion simply a pretext employed by consistent establishments to serve their own strategic goals in the region?

Consider the draconian FCR, the operative legal instrument in the FATA since the Raj to answer this query. Under the FCR, a single political agent exercises almost inexorable discretion over judicial and administrative functions. The political agent, a bureaucrat appointed by the federal government, can incarcerate a man for up to three years without providing any justification. He can discharge collective punishment by persecuting an entire tribe for the crimes of one of its members. The Frontier Corps (FC) and the Political Agent (PA) rely on private militias assembled by the local jirga leaders known as the maliks (master) to establish their writ.

Essentially, whereas the lack of an orthodox policing infrastructure and court jurisdiction over the tribal areas may seem proof for the notion of azad qabail (independent tribes), the bondage of these azad people to an even more stringent and potentially repressive legal code gives a lie to this very myth. Clearly, no man subjected to the FCR can be considered autonomous in any form.

The fact that the Pakistani state aligned itself with this ignominious arrangement once the British left can be attributed to several reasons. Firstly, the vested interests of the privileged classes reaping the rewards of the system, namely the tribal maliks and the bureaucracy, made the implementation of reforms an increasingly uphill task, something that successive governments seemed not to consider worthwhile. Secondly, the military establishment remained wary of reawakening irredentist sentiments of Pakhtun nationalism were a unification to take place between FATA and K-P.

Now whereas it is increasingly clear that basic political and civil rights have long been denied to the people of FATA through the perversion of the FCR, less effort is given to highlighting the calamitous effect this perversion has had on our collective national security.

The FCR ensured that whilst the PAs had ample opportunity for financial delinquency and the tribal leaders ruled with an iron fist dishing out disproportionate punishment, the average citizen began to yearn for equal citizenship and financial alleviation. The combination of a disenchanted population seeking emancipation from the oppressive FATA elite as well as the lack of proper state jurisdiction in the region led to the creation of a vacuum. Think Iraq after the US’s invasion in 2003 or Libya after the toppling of Muammar Gaddafi. In similar vein, FATA became a potential hotbed for breeding extremism and nurturing terrorism.

The Pakistani establishment had done just this during the Afghan jihad. Scores of madrassa’s were established in FATA to wage guerrilla warfare against the Soviets in Afghanistan. But mass disillusionment, and the extremist proclivities emitting from such a state of affairs are content neutral epidemics. If the state could exploit the wayward and precarious state of FATA for its benefits, the very same elements could be exploited against the state itself. And so when the US invasion of Afghanistan prompted top al Qaeda leadership to flee their bases in the country and retreat to the bordering tribal areas of Pakistan, they were presented with an extremely amenable environment in which to rejuvenate and consolidate their organisation.

The pervasive myth throughout modern literature remains that the tribal people were obliged by their adherence to the Pakhtunwali code to give refuge to the al Qaeda leadership when the former sought it, regardless of the criminal nature of the organisation. Being far from the truth, this morbid distortion of the Pakhtunwali seeks to place blame on the victim, who were the people of FATA, and exonerate the real culprit, the state of Pakistan.

Pahkhtunwali does not impose a strict obligation to provide hospitality to a guest. Rather, the notion of nanawatai (a tenet of the Pakhtunwali code which allows a beleaguered person to enter the house of any other person and make a request of him which cannot be refused, even at the cost of the host’s own life or fortune) entails an offending party soliciting forgiveness for a crime in exchange for which they would be conferred protection by their host. Nuanced exceptions to the rule are often elicited especially when the concerned fugitive has been involved in a blood feud or when he is sought by the Pakistani government. Furthermore, even when refuge is granted, the refugee must surrender his weapons before entering the protection of his host.

History is clear that this was not how events unfolded. Al Qaeda did not come to pursue tribal protection in return for repentance, nor did they lay down their arms before entering FATA. Rather, Osama Bin Laden’s aides came armed with firepower and stashed with Arab cash, dismantled the established power structures by murdering dozens of maliks and old clerics and indulged in recruiting tribal youngsters towards the purpose of jihad. Axiomatically, they were able to do this as a result of the fabricated social dynamic of FATA at the time and the absence of any focused state reprisal due to lack of a true administrative system.

It is pertinent to mention here that whereas the Pervez Musharraf government remained largely ambivalent in its Afghan Taliban policy post 9/11, there can be no doubting its hostility towards al Qaeda. Several top al Qaeda operatives were rounded up and handed over to the US authorities swiftly after the invasion, subsequently causing group to declare a holy war on the country in 2002 and make two attempts on the president’s life during the following year.

It was also al Qaeda’s meteoric rise in FATA along with US exhortation of the Pakistani government to ‘do more’ that prompted the army’s first incursions into the tribal areas since 1947 in 2002. Clearly, there can be no question of collusion between the state and al Qaeda after 9/11.  This distinction is important in understanding that it was not state facilitation, but the blowback of years of neglect and political lethargy that allowed FATA to become an extremist stronghold post 9/11.

It was from within this stronghold and under the patronage of al Qaeda that Tehreek-e- Taliban Pakistan (TTP) was formed to combat the Pakistani state. Despite TTP’s infiltration into various urban centres during the peak of its assault from 2009 to 2013, FATA remained in its true fortress from which it was able to inflict unimaginable wounds upon the state of Pakistan by attacking security institutes and killing thousands of civilians. It may seem a farfetched postulation, or an opportunistic and knave hypothesis, but a large number of lives lost in the ensuing War on Terror after 9/11 could possibly have been saved had FATA not been side-lined to the periphery of Pakistani politics as a matter of decided policy since 1947. Integration would not only have allowed placating the concerns of the downtrodden citizens, it would have ensured our national security by neutralising a potentially volatile region.

One would think that in light of the damage already suffered as a result of current arrangement, our wise and benevolent civilian rulers would go to any lengths to rectify the situation and immediately move towards reforms in the tribal areas. But alas, the said wisdom and benevolence seems to end where their own political interests begin, no matter how trivial or arbitrary.

As a result, FATA seems set to remain in its current predicament for the foreseeable future at least, with all of its dangers and vulnerabilities still intact, notwithstanding the gains of Zarb-e-azb.