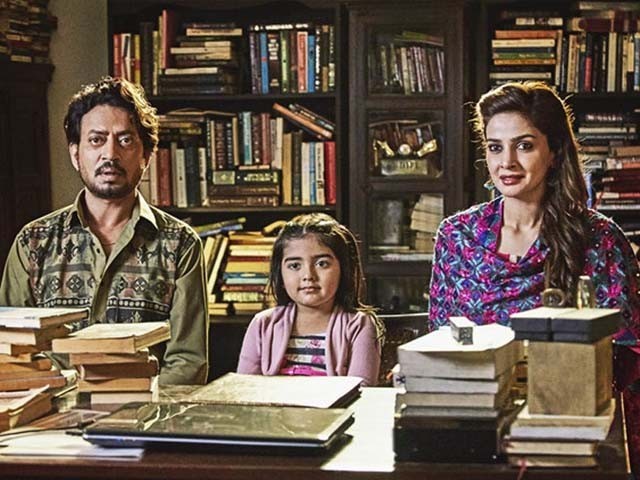 Hindi Medium made me realise that language has the power to change. PHOTO: SCREENSHOT

When you think of language, you think in a language. For me, it’s English. It always has been. Sometimes, I wonder if my thoughts were in another language, would I be different? Would my life have turned out differently? Perhaps. You never know, that’s the thing.

Hindi Medium made me realise that language has the power to change. I see it every day around me. I see it at work when I try to communicate in Urdu but my vocabulary falls short. I used to see it in school, when people mocked that one kid for speaking in Urdu because God forbid, his English was not up to par with our colonised culture of a school.

But that’s the thing, it shouldn’t have to matter. The way you communicate, regardless of language, should be the point. But we live in a country that has been consumed by this colonial garb, and I don’t think we are even trying to break free of it.

Hindi Medium proved what we already know – we are so far behind from understanding and relating to a culture that is our own that we are deteriorating. Irrfan Khan’s monologue at the end, in his half-broken English was so powerful. It portrayed the notion that language does not matter as much as we all make it out to be. He was doing perfectly well without being fluent in the language of the coloniser. He had self-worth, which is something not a lot of people can say they have. He was proud and self-made, and when he tells people he owns a shop, he says it proudly because he doesn’t need anyone’s approval.

But Saba Qamar did, and maybe that was her pitfall – that moment when she’s at the park with her daughter and her friends don’t want to play with her – it broke my heart because that’s how our society functions. The minute we hear someone speak in Urdu, we label them as the ‘other’, but maybe we are the ones who are the ‘other’ at the end of the day. This is the land of our people; it no longer belongs to the British, so why do we try so hard to hold on to a legacy we never asked for?

Back when I was in school, I remember seeing parents line up for hours just to get a form to apply. They’d be standing there, looking at us with this nervous expression. I remember thinking how long the line was, all for this school that wanted all its kids to be the same – all for a place that thrived upon conformity – I didn’t get it and I don’t think I ever will. But that’s what Hindi Medium highlighted so well; the rat race for these private intuitions.

Sometimes it isn’t even about the school or the children; it’s about telling everyone around you that yes, this is my life, this is who I am when in reality you are so far away from everything you stood for. The fact that Khan realised this is what broke barriers in the movie industry. No one says it out loud. No one confronts it. But it’s there, lingering beneath the shadows at the fancy committees as you tell your friend, my son got into XYZ school, or my daughter got an interview there.

The day the list came out – I can still picture it in my head. It was usually during break time. Back when I was in around 10th grade, the list came out on paper. They’d put it up on this bulletin board. Parents would come rushing in. They’d be pushing and shoving, and hoping and I’d stand there, watching. Most of the time, you’d have to have a parent or a sibling connection to get into XYZ school because somehow, that made you better – that made you worth it. Anyone who arrived after A’levels was instantly labelled as “other”, because they didn’t have what we did. Now that I think about it, all we had was a connection to this place that was imprisoning my individuality, a place that was telling me that it was not okay to be different or bold, and that the more I tried to be like my peers, the more I’d be valued.

We believe that it is our right to get the best education, the best job, the best way of life.

But what about our help?

We don’t really think of their rights; they have desires too, they want the best for their children as well, but we live in a country where few things are based on merit as opposed to your father’s name. Everything is based on connections, who can we call and what can they do to make our lives easier? Sometimes we seem to forget that our worth has to be earned; we walk around life assuming everything should be handed to us. But Khan’s character knew that it didn’t. He made his life from a tailor’s assistant to a business man, and he understood that.

When the movie shifts into the part when Khan and Qamar feign poverty, everything comes into perspective. The way the poor neighbours were so willing to help a hand was heartening, yet Qamar and Khan’s friends were extremely quick to judge them for being “Hindi medium”.

“Why shouldn’t they speak Hindi? It is our language,”

It goes a long way because no one ever answers that question.

I think all children in their formative years should watch this movie to learn about self-worth and self-accomplishment. At the end of the day, getting into Delhi Grammar School no longer mattered, because Khan realised that he didn’t want any part of a life that preyed on the less fortunate in order to push the elite further into their colonial bubble.

Yes, English is the language of the coloniser, and it helps to know it, but Urdu (like Hindi in India) is the language that connects us as a nation. You can’t read Faiz Ahmed Faiz or Ghalib without knowing your own language, you can’t communicate with the common man, or anyone who may not be able to speak in English, so you make them learn the language that is inherently other to make your own life easier than it already is.

We are, in effect, taking part in a form of reverse colonisation, because instead of communicating with those not lucky enough to have an education, we force them to learn our ways, our small and insignificant ways to tell ourselves that we are somehow better and smarter. But we aren’t. Khan summed it up so well when he said that he took what was never his, because that is inherently what we are constantly doing, taking more for ourselves while the poor get weaker and smaller and our egos grow large enough to consume all that society has to offer.