In the event of a terrorist attack, why are Muslims in the West forced to assure the world that they are “good” Muslims? 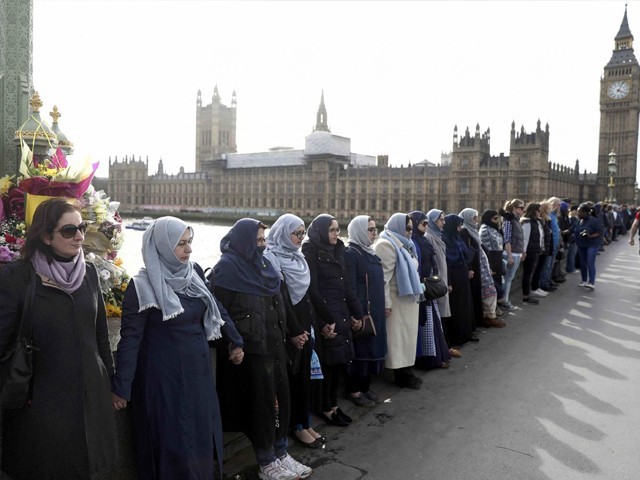 Muslim women gathered on Westminster Bridge in a show of solidarity with the victims of Wednesday's terror attack. PHOTO: REUTERS

We witnessed yet another terrible and senseless attack against innocent people in London, in which seven people were been killed and some 50 injured. And it was only a week back when a suicide bomber of Libyan origin killed 23 innocent people at a concert in Manchester.

However, this is not enough.

Whenever a terrorist strikes anywhere, but more so in a western capital, Muslims all over the world are asked to make a declaration of faith in support of western democracy, freedom of speech, and other values espoused by the modern world and against violence in any type or form. They are forced to assure the world that they are ‘good’ Muslims who do not subscribe to these kinds of acts and quote verses from the Holy Quran attesting to this fact.

Binary choices of the type – if you are not with us you are against us – required from Muslims are basically unfair.

The Charlie Hebdo attack in Paris is condemnable by Muslims, not because it was against the so-called western value of freedom of speech, which is applied rather selectively (try questioning the Holocaust or the alleged Armenian massacre) but because it goes against the basic teachings of our Prophet Muhammad (pbuh) who has shown repeatedly that he would not be provoked by insults and personal attacks. A binary choice does not bring out this fact. It is more like expecting a yes/no answer to the question,

“Have you stopped beating your wife?”

Nevertheless, since most of these acts of violence target innocent people, women and children, they need to be condemned unambiguously. What do these statements achieve?

The short answer is that they help in increasing security and encourage the cooperation of the Muslim communities with law enforcement authorities in order to identify potential threats.

All this is necessary, but is it sufficient?

The implicit assumption when Muslims are required to make these binary choices is that no matter what happens to you, you will not resort to these acts of violence, that is, you will not take the law in your own hands.

This construct works in national settings – in most cases – where there is an effective machinery to enforce the law. However, this does not work in an international setting where the corresponding machinery is ineffective in the face of other super power political and nationalist considerations.

When a resident of Baghdad, Aleppo, Damascus, Beirut, Gaza, Tripoli or Kabul sees the destruction in the wake of western intervention and remembers those that were killed and maimed, his blood boils and he looks for revenge against whomsoever he thinks is responsible. He also sees that there is no effective international forum to bring the perpetrators of these massacres to justice. The decks are stacked against him. This is where the problem arises. He is desperate and irrational. He does not see that the actions of western governments cannot be directly linked to the common man/woman.

Since these trouble spots have a strong international presence, it is easy for him or her to place the blame on a western power instead of the local dictator, be it Saddam Hussein, Bashar al Assad or the Taliban who may be the primary reason for destabilising the status quo.

He seeks revenge by planning and executing attacks against western targets, which also kill indiscriminately.

If we look at the number of incidents from 1970 to the present, as included in the international terrorism database, we see a pattern. In the earlier years, the terrorist attacks were primarily against Israel and its interests. This was a time when the Israeli-Palestinian conflict was centre stage.

In later years, post Iraq War I and Iraq War II, Afghanistan, Baghdad and Syria, the attacks spread to western capitals and began targeting the west.

In light of this, one would think the easiest way to limit these terror attacks would be if the ‘well-meaning’ western powers leave these Muslim countries to their own designs and not interfere. If the locals cannot overthrow a Saddam or an Assad, so be it. The destruction caused by ‘well-meaning’ western intervention in favour of so-called popular movements is often times much more than that caused by the reign of terror by the local dictator.

In addition, the United Nations (UN) system needs to be strengthened so that it can respond to cases of utter humanitarian crises and international aggression such as that seen by Saddam in Iraq and Israel in Palestine. In these cases, international intervention needs to be restricted.

Muslims, on the other hand, need to realise that western powers only act in their own interests and not primarily in the interest of the locals.

These interests could be purely material such as oil and minerals or they can be related to their respective strategic spheres of influence. They can be couched in terms of democratic values versus dictatorial oppression, or they can use the theme of God versus God-less communism. More recently, these interests are seen to exploit the sectarian splits in Islam for their own benefit.

Why can we not see that somebody like President Donald Trump does not know and more importantly, does not care about the difference between a Shia or a Sunni and would probably not be able to tell a Hindu from a Buddhist.

Witness the transition of US policy under Ronald Reagan which called the jihadis “soldiers of God” when they were fighting to throw out the God-less Soviet Union, to “terrorists” when these same people turned against the West. More recently, notice the U-turns in policy from being pro-Saudi Arabia to pro-Iran and back again to pro-Saudi Arabia. Why can we not see that they switch sides at a moment’s notice if the alignment of their interests requires it?