Are doctors there for patients, or money? 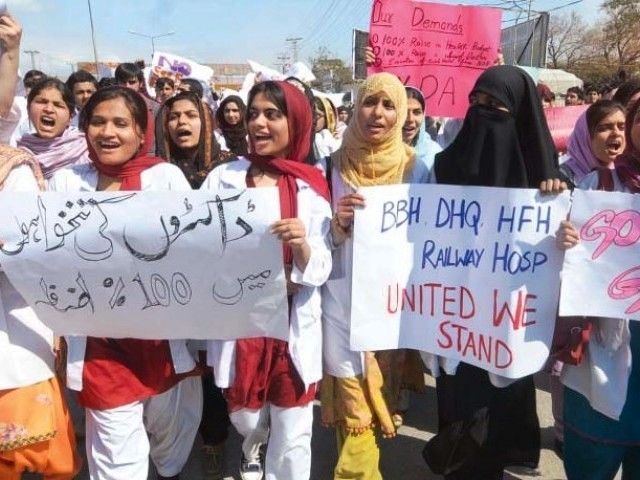 It is no secret that doctors in Pakistan are woefully underpaid at every level.

The recent uproar regarding the issue of increasing doctor’s salaries saw the Young Doctor’s Association (YDA) take to the streets and boycott hospital wards.

The strike lasted over two weeks and finally came to an end on Monday, when YDA officers were called in for a meeting with Health Secretary Fawad Hassan Fawad and accepted the latter’s ‘word’ to speak to Chief Minister Shahbaz Sharif on their behalf and raise salaries by July this year.

It is no secret that doctors in Pakistan are woefully underpaid at every level. Many would grant the YDA’s appeal for an increase in salary as a legitimate one, except that this appeal also stipulated that young doctors receive a pay increase bringing their salary mark from Rs18,000 to Rs70,000.

This falls into the pay bracket of associate professors and made the call seem a tad absurd, considering that first and second year residents were now demanding the same salary awarded to those supervising them.

The strike affected thousands of patients and YDA doctors set up camps outside hospitals after boycotting general wards. They also threatened to quit the emergency wards of all public hospitals if their demands weren’t met and announced a hunger strike.

(our messiahs our killers).

That jibe points to a very precarious juncture in the decline of our collective civic sensibilities.

There is a reason why medicine is considered the noblest profession and this reason can be summed up in the principles underlined in the Hippocratic Oath. The ancient Greek oath historically penned down by Hippocrates in the late 5th century BC stipulated a conduct for physicians that went ‘above and beyond the call of duty’ in every respect.

Modern revisions of the oath, such as the Oath of Maimonides and a newer version drafted by Dr Louis Lasagna in 1964, have become the rite of passage for all doctors. The oath requires, among other things, that doctors never refuse treatment to a patient in dire need or discriminate between whom they choose to assist.

This is the reason why doctors are required to treat patients on death row regardless of their crime or the fact that they are liable for capital punishment following the treatment.

Now that the strike has been called off, the government needs to seriously re-evaluate pay scales for all medical professionals, who arguably work harder than anyone else, with little or no sleep and often even less to live on.

This episode has raised serious questions about the consequences of pushing the middle class to its limits. The fact that scores of young medical professionals in Punjab were willing to disregard their duty for a pay increase signals a dangerous turn of events.

It means that we have finally reached the point where nothing remains sacred and where even the business of saving lives could boil down to just that – a business.