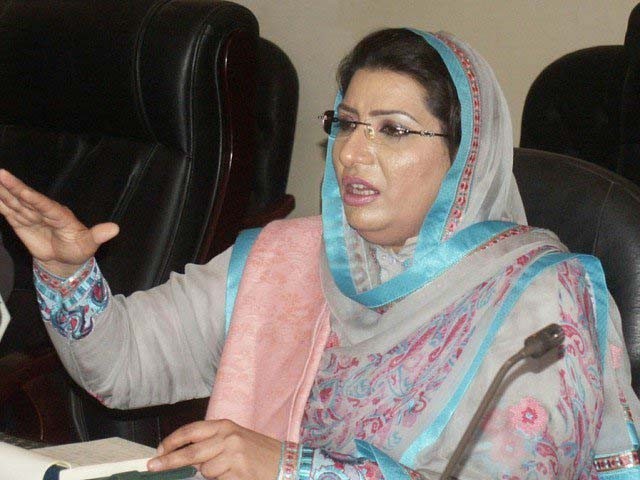 During cabinet meeting, information minister says her support will remain with the PPP. PHOTO: PID/FILE

This is not the first time Awan has changed her loyalties, as she had originally been elected on the Pakistan Muslim League-Quaid (PML-Q) ticket in 2002 and then joined PPP in 2008 just before the elections.

First, the claims of PTI of representing something new and of being a harbinger of change have little truth in them. Second, PPP’s fortunes in Punjab are grim and it is doubtful that it is going to make any impact in the 2018 elections.

To a certain extent, her decision is understandable. All politicians, particularly those who hail from the rural areas, act in rational self-interest as their foremost concern is to enhance their electoral prospects. Likewise, political parties are also looking for electable politicians as they also want to increase their share of votes. After all, all politics is realpolitik. Viewed from that angle, there is perhaps nothing wrong.

However, it does raise questions on the genuineness of PTI’s tall claims to be the so-called anti-status quo party. Over the years, I have heard loud claims from foulmouthed PTI trolls that their party represents something new and is a break from traditional ways of doing politics. In their books, everyone else is corrupt and deplorable and their party alone embodies honesty, justice and sincerity.

I really doubt that accepting people like Awan, a woman who alleged on live TV that Kashmala Tariq was a slut in the presence of Dr Shireen Mazari, is a break from the status quo.

As discussed earlier, it would not have mattered if PTI had not been making these lofty claims of being the anti-status quo party. However, in the light of these tall claims, accepting people like Awan into the party merely shows that PTI, like the rest of the parties, has little regard for principles and is ready to accept anyone who is electable. People who have been called corrupt by PTI leadership and its impressionable followers suddenly become clean after they join their party. This is blatant hypocrisy and nothing else.

As I already mentioned that Awan’s move also depicts the dwindling fortunes of PPP, it is pretty obvious that her move is to secure her political future as she is well aware that PPP is virtually finished as an electoral force in Punjab.

In 2013, it was routed and could only win six seats, down from 108 in 2008. Prior to the 2013 elections, the PPP leadership was hoping that the votes would split between Pakistan Muslim League-Nawaz (PML-N) and PTI, advantaging PPP. However, contrary to their expectations, PPP’s own voters turned towards PTI. In addition, PPP was not able to capture the imagination of millions of first time voters who ended up voting for PTI.

After the dismal performance in the 2013 elections, many voters seem to have written PPP off, and as a result, there has been a continuation of shift of the traditional PPP supporters towards PTI.

But what are the reasons behind this?

The first and foremost reason was the poor governance quality of the Asif Ali Zardari- led federal government. Furthermore, the PPP government was embroiled in several corruption scandals and its tussle with the judiciary further jeopardised its performance.  More than anything else, daily power cuts were a constant reminder to people of all walks of life about incompetency of the PPP government. In Punjab, during the scorching summer, power cuts continued for up to 12 hours in urban areas and 18 hours in rural areas. Such power cuts literally affected all walks of life and in the end, costed PPP dearly.

The media also never gave PPP any respite and relentlessly criticised it. Even the achievements of PPP like the 18th amendment and the improved National Finance Commission (NFC) Award were completely ignored. A constant tussle of PPP with the judiciary also occupied PPP towards ensuring its survival, rather than giving attention to more pressing problems.

These factors really hurt PPP in both Punjab and Khyber Pakhtunkhwa (K-P). In Punjab, PPP ended up losing even its traditional supporters such as voters from low income segments and minorities.

Furthermore, Punjab’s urban areas over the years have become increasingly conservative and consequently, the appeal of PPP’s left-leaning ideology has waned in the cities.  Even in 2008, majority of PPP’s vote share had come from rural areas and southern Punjab. Unfortunately, the ideological conservatism continues to rise, benefitting right-wing parties like PTI who have managed to make substantial inroads in the urban areas.

After disastrous results in 2013, the problems of the party in Punjab have continued to aggravate due to leadership’s neglect. Apparently, the leadership has given up on Punjab and has concentrated most of its efforts in consolidating its powerbase in Sindh, a development which has effectively ended PPP’s status as a national party and relegated it to merely a regional party.

This is an unfortunate development as PPP, due to its liberal ethos and history of being a pro-poor party, provides a much needed check to the on-going rise of right-wing and reactionary politics. If it wanes from the most populous province, the results will be catastrophic for the ideological fabric of the country.

In my opinion, PPP needs to focus on Punjab again and try to rekindle its contact with its supporters in the province. It has to understand that it can never win the federal government without reclaiming its support base in Punjab.