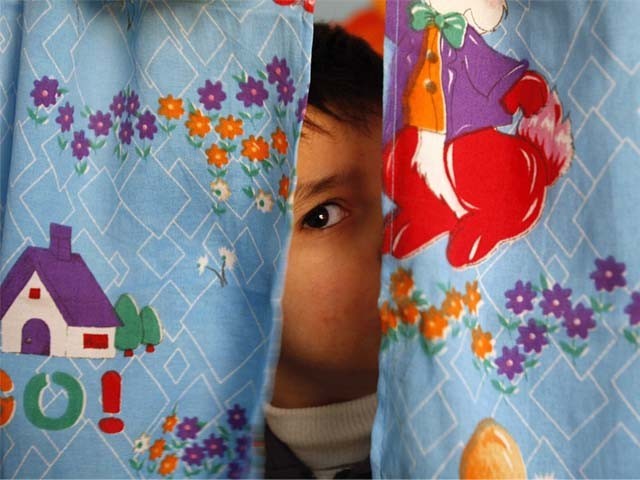 An autistic child peers from between curtains at the Consulting Centre for Autism in Amman, Jordan. PHOTO: REUTERS

We all want comfort and happiness for our children. From the time they’re born, we want our little ones to excel in life. In Pakistan, this desire usually translates into a narrow focus on achieving academic excellence, which is typically considered the most widely esteemed cognitive ability.

While some parents do realise (and often lament) the potential negative effects of this academic ‘rat race’ on their own children, one aspect they often ignore is the pressure this creates on families of children with special needs – children who may be gifted in one way or the other but may not necessarily have the ability to excel in academics.

This piece is a call to arms for the society, particularly parents, to work towards creating a more inclusive culture, by being open-minded about cognitive abilities, and giving up on their obsession with academic excellence.

From infancy, most parents strive to promote recognition of numbers, shapes and alphabets in their children. Success and quality of parenting are thus gauged by how fast and fluently a young mind can dispel its intellectual capacities via the tongue. These cognitive strengths, from early childhood, set the platform for the child’s parents upon which they can elevate their pride and exuberance with each acquired milestone along their child’s intellectual developmental pathway.

However, there are cases where these cognitive milestones either do not keep pace with standard timelines, or do not emerge altogether. One such condition is autism, which exists across a spectrum of varied challenges that are characterised by impairments in social reciprocity, atypical communication and unusual behavioural repertoire. There are instances (in early childhood) when these impairments are not discerned with ease, either due to lack of awareness, or the variability of level in the spectrum.

The role of a qualified Developmental and Behavioural Pediatrician (DBP) is of critical importance for parents (at this point of their child’s life), when their minds are rankled by an enormity of questions about the disorder, its prognosis and social impact.

But the question is, how many of these developmental and behavioural pediatricians, qualified to make a correct developmental diagnosis, do we have in Pakistan? A handful, or even fewer?

Unfortunately, there is no fixed number available. In the entire US alone, there are only about 800 DBPs who are certified to diagnose physically non-apparent disorders like Autism Spectrum Disorders (ASDs) and Attention Deficit Hyperactivity Disorder (ADHD) in early childhood.

Each of the 50 American states have a varied share of such pediatricians – some have a handful, while some just one, thereby leading to a six to 12-month prolonged waiting period in order to gain a diagnostic appointment for the concerned child. Parents, who are apprehensive of some sort of developmental delay or disorder in their child, are heavily reliant on these DBPs and their ability to make an apt diagnosis for their child so that he/she can qualify for early intervention services in time.

In contrast, the treatment and ownership of developmental-behavioural disorders in Pakistan is dismal, both on the medical as well as the societal front. Not only is there an extreme dearth of DBPs in the entire country, the awareness amongst parents, relatives and community members about recognising early-childhood ADHD or autism-related symptoms is nearly absent.

Even when the symptoms are recognised, there is an outrageous denial of the specific disorder, by parents and extended family, who want to envision a cognitively typical and an academically strong future for their child. They all shield their child from the society’s intrusions and questions, as long as they are capable of doing so; as long as the symptoms don’t become distinct to be sufficiently discernable; and the sensitive window of opportunity for learning and social development (between ages two to three years) has already elapsed.

Why is this so? Why is it that parents don’t openly make others aware of the developmental challenges faced by their child (in the prospect of better inclusion), in the same way as they would perhaps boast about his/her cognition-related achievements? According to the Journal of Developmental and Behavioural Pediatrics, USA,

“Hurtful, unsupportive behaviours have been attributed to discrimination and stigmatisation, which occurs towards those with chronic conditions, especially visible conditions.”

This can attribute to why most Pakistani parents choose to shield their child (with special behavioural/developmental needs) from the collective unreceptive attitude of the society for as long as it’s possible.

Visible disorders, such as Down syndrome, cerebral palsy or muscular dystrophy, are easily discerned. Perhaps the society’s insensitive or intrusive attitude towards individuals with such disabilities discourages parents of children with other not so easily discernible disorders like autism, from owning and ultimately advocating for their child’s disorder.

This creates an environment of distrust, fear, rejection, and isolation for the families of children with special needs. Pitying remarks, comparisons with other children’s cognitive milestones, or focusing only on what’s ‘wrong’, are all societal attitudes that shatter the prospects of any sort of fruitful inclusion. Equally hurtful is what is not said – when close community members never mention the child, never ask how the parents are doing, and avoid all references to the major event (disability diagnosis) in the family.

We must collectively realise that hiding our child’s disability solely to sustain our cognitive prestige, is not the solution to him/her becoming a more successfully confident individual in the long run.

In addition, we must create avenues for more female doctors to become licensed DBPs; to bring their focus (which is primarily in the money-making domain of gynecology) to the critical area of child development, to those early months and years of life which warrant as much care and attention as those prenatal or perinatal moments.

Likewise, professionals working with families should encourage them to be more proactive in stating their support needs to others, as well as indicating explicitly what kinds of societal behaviours are hurtful. Parent support groups are the key to fostering such perspectives, enroute the much yearned destination of inclusion.

The Karachi Down Syndrome Program (KDSP) is perhaps the most commendable effort in Pakistan, making a devoted attempt to unite individuals and families dwelling in similar circumstances or challenges. We are desperately in need of such organisations for other physically non-apparent disorders like ASDs and ADHD, where parents can share, learn and acquire therapeutic comfort from others by positively focusing on what their child can do instead of what he cannot do, by advocating for his cognitive needs, and most importantly, owning his behavioural diversity in front of the entire world with utmost compassion and courage.