When Trump met the pope… 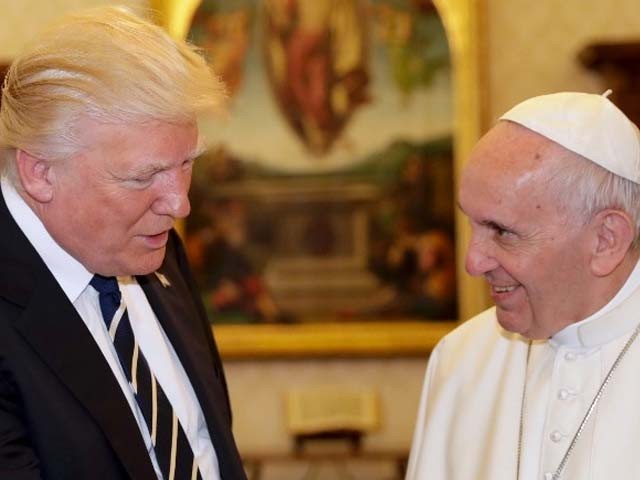 On May 19, 2017, Donald Trump landed in Saudi Arabia, to mark his first series of international appearances as the President of the United States of America. The itinerary read as follows; Saudi Arabia, Israel, The Vatican City, Brussels for a North Atlantic Treaty Organisation (NATO) leaders meeting and finally Sicily for the G7 summit.

As one would expect, there were a myriad of talking points, just hours after Trump left his Mar-a-lago comfort zone. Firstly, from a journalistic point of view it was exceedingly hard to cover this trip. In Saudi Arabia, gender segregation is still at an all-time high and considering how most journalists flying with Trump’s convoy were females, the American public was deprived of a lot of information that was left uncovered. As women were asked to leave most of the spots where the leaders of the two countries were meeting, up until the visit to the Western Wall in Israel, a lot of what Trump or the leaders of the other countries said was left unreported. This discrimination was left uncontested because of the fragile nature of the meetings.

Moving on to the actual visit, Trump did what Trump does. Shook hands, smiled, looked clueless and contradicted his campaign rhetoric, you know, the usual. During his campaign to become president, arguably the most controversial proposal of his was the “…complete shutdown of Muslims entering the US” and in March, 2016, he further cemented his stance on the Muslim community by saying,

“I think Islam hates us”.

After taking a clear side in the war against Islam, not even radical Islam, the audacity that man has to go to Saudi Arabia, and say in front of the leaders of the Muslim world:

“…Young Muslim boys and girls should be able to grow up free from fear, safe from violence, and innocent of hatred”.

Moving on to the specifics, Saudi Arabia and the US signed a landmark $110 billion arms deal that will see Saudi Arabia spend $350 million on American material immediately. The deal is important for two main reasons, firstly, because of Saudi Arabia’s strained diplomatic ties with Iran and the human rights violations on their name, to not sell them arms was paramount; which is something the Barack Obama realised when he put the deal on hold, secondly, just because of how hypocritical it is to say the word “peace” roughly 10 times in a speech right before signing a record breaking arms deal.

What also became a huge issue was Melania and Ivanka’s hesitance in covering their heads; which is by law, a code that all women in the country absolutely have to follow, showing disrespect for Saudi laws. All of these tensions boiling aptly in the background to Trump dancing with swords and doing his best evil genius impression by caressing a giant glowing globe.

As Trump landed in Tel-Aviv, the main talking point was the fact that Trump had divulged classified intelligence pertaining to Israel to the Russian leadership, when they met at the White House. In response, Israeli Defence Minister Avigdor Liberman, said,

“The security relationship between Israel and our greatest ally the US, is deep, significant and unprecedented in volume.”

And was soundly contradicted on the same day when former chief of the Israeli intelligence, Danny Yatom, told a Tel Aviv radio station that, if true, Trump’s disclosure was likely to cause “heavy damage” to Israeli and American security. After creating yet more controversy by telling the Israeli government to stay out of his “private” visit to the Western Wall, Trump promised that his administration could finally end the almost century long tussle between Israel and Palestine by brokering “The Ultimate Deal”.

Perhaps the most optimistic swing of the bat for Trump during his visit to Israel was the prospect of a coalition between the US, Israel and Saudi Arabia. Thus aligning himself with two countries who have become the face of human rights violations in the region, by saying instead that together, they are at the fore-front of peace in the middle east.

It wasn’t until he reached the Vatican that his trip hit the next gear; from pictures of the once-happy pope doing his best impression of the saddest man in the world, to Melania finally covering her head. This seemed more like Trump visiting his disappointed father, trying his best to appease him. Where in the past, the two have squared off on very pertinent issues, obviously having opposing views, this is a meeting the world looked forward to, and they decorated and savoured each second of it.

Last year, the Prince of Wales visited the Pope, with his wife neither wearing black, nor a veil, however, no one made a meal out of it. Melania, however, being Trump’s wife had to explain why she chose to cover herself here and not in Saudi Arabia, to which her camp simply claimed, “…she wasn’t asked to”. Perhaps the biggest irony would be the presents that Trump gave to the pope, those that included, out of all things, a first-edition set of Martin Luther King Junior’s writings, including all five of his books: ‘Stride Toward Freedom’, ‘The Measure of a Man’,  ‘Strength to Love’, ‘Why We Can’t Wait’, and ‘Where Do We Go from Here: Chaos or Community?’

He also gave the Pope a piece of granite from the Martin Luther King Junior Memorial’s ‘Stone of Hope’ statue in Washington, DC, and a bronze sculpture named, ‘Rising Above,’ which the White House said represents “hope for a peaceful tomorrow.” A hypocritical but surprisingly thoughtful set of presents considering how, in his address to the congress in 2015, the Pope expressed his admiration for Martin Luther King Junior. The Pope reciprocated by giving Trump three of his writings, which he typically gives to heads of state, including ‘Amoris Laetitia’, ‘Evangelii Gaudium’, and ‘Laudato Si’, concerning topics such as family, the joy of the gospel, and the environment. But the one gift that probably sent a message to Trump was the Pope’s 2015 encyclical calling for climate change action.

It appears as if the world has realised that they have to treat Trump with kid gloves. Letting him say or do whatever he pleases as they all just nod. Using the right words is a trait Trump has just recently become accustomed to; by going to disgruntled people and saying the right things is essentially what it takes to be a politician. However, let it not mask the fact that in the last two weeks, Trump along with Saudi Arabia and Israel have made some hugely aggressive moves, the effects of which will be unprecedented.

The writer had a Bachelors degree in International Relations and is the former president of the SZABIST Student Council. He is also an Arsenal FC fan.

Did Chelsea win the title with little or no fight from their competitors?

Bruno Fernandes committed murder, why is he being allowed to play football?