Why do students in American high schools resort to humiliating Muslims and people who aren’t white? 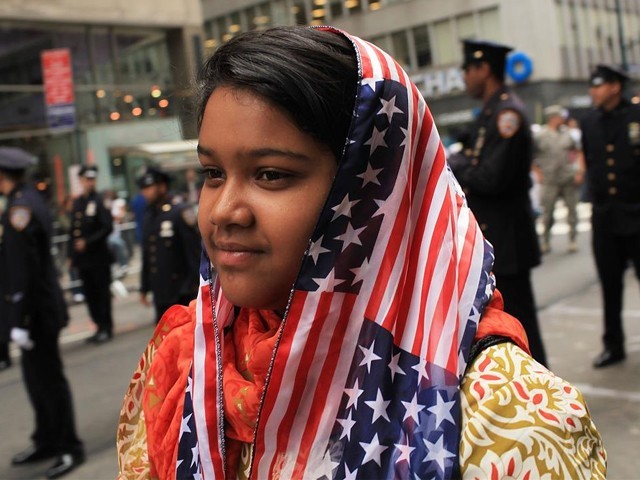 Aliza Fatima, 12, of Queens and a descendent of Pakistani parents, participates in the American Muslim Day Parade on September 26, 2010 in New York. PHOTO: GETTY

When the student body president of a Northern California high school won his campaign after posting an Islamophobic joke, I was not surprised. It is part and parcel of American high schools to reward students for racism, particularly when the school administration isn’t interested in protecting vulnerable students for the sake of ‘keeping the peace’.

By overlooking racist and toxic behaviour, schools inevitably normalise racism, misogyny, and heterosexism, all of which lend to bullying and cheapen the lives of many young people at these schools. And it’s not only the oppressed or the so-called victim who is negatively affected by this situation, but the oppressor as well, who finds himself falling into behaviour patterns that terminate potential points of connection and inhibit transformative learning.

But why do students in American high schools resort to racism? Socialised behaviour and enforcing hegemony is only part of the answer. The reason teenagers peddle jokes that dehumanise their peers is because they want to appear to be ‘cool’.

What is American ‘cool’? It’s being hypermasculine, socially acceptable, and bold. The ‘bold’ trait both includes and celebrates controversy, which bullies the weakest and from which the perpetrators emerge unscathed. It’s a kind of boldness that reinforces and enhances social mores, of which racism still remains a crucial part. The foundation of American confidence is built on the dehumanisation and humiliation of women, LGBTQ people, and people who aren’t white. And all this starts, and perhaps even reaches its peak, in high school.

But the compulsion for American ‘cool’ is rooted in insecurity, especially when it appears among high school students. It’s the insistence for social belonging that leads young adults to embrace, celebrate, and reproduce racism within their own generation. And Muslims have always been the convenient ‘other’ against which western civilisation has constructed itself, as Palestinian-American Professor Edward Said theorised and proved in his seminal Orientalism (1978).

The condition of this construction of identity against the Muslim other has only intensified in the aftermath of the War on Terror, the constant media barrage against Muslims in the name of fighting the Islamic State (IS), and the public validation of American Islamophobia with the election of avowed racist President Donald Trump.

The student under controversy at San Ramon Valley High School – the junior student body president –won his election campaign with the aid of a video he made where he promises to fight IS. While the video was taken down within 24 hours of uploading it, it clearly struck a nerve in a diverse part of the country. The school reported that the video used stereotypes of “Middle Eastern people” based on “their dress, names, manner of praying and religious dietary restrictions”.

The participation of two reportedly Afghan students in the video as ‘terrorists’ not only exposes the backhanded character of American racism, it demonstrates the lengths to which people who are not white will go to be accepted into the American fabric of belonging. For Muslims, there is always a price to pay for social acceptance, and that is our self-respect.

Racist bullying remains a chronic problem in schools in America, though it isn’t highlighted as much as sexism, homophobia, or transphobia. The Netflix TV series 13 Reasons Why, which incidentally also takes place in Northern California, exposes the misogyny and culture of rape and sexual harassment which is rampant in American high schools, and foremost enabled by teachers who ‘look the other way’.

The same dynamic applies to Islamophobic racism. A 2015 report by the California chapter of CAIR found that 55% of Muslim students reported bullying, which is twice the number of all students facing bullying on a national basis.

The fact that teachers are complicit or even instigators of bullying is as disturbing as it is unethical and counter-intuitive to the goal of education. The 2015 incident of 14-year-old Ahmed Mohamed being arrested because his teacher called the cops on him for making a clock attests both to the complicity of teachers in racism and the perceived threat of critical thinkers and talented students, who may be Muslim and not white.

The Texas school district where Mohamed studied and was unjustly led away in handcuffs faced no accountability, just as San Ramon Valley High’s junior student body president will face no discipline for producing images of violent Muslims, and ridiculing the culture and faith of his peers.

Even amidst the media furor and the concerns of parents who have dared to take a stand, the irony of a junior student body president winning a campaign built on racism isn’t lost. After all, Trump was elected president of the US in exactly the same way.

The author is a freelance writer and activist, currently based in Philadelphia. She tweets @karachiiite (twitter.com/karachiiite)

Yes, what Aziz Ansari did was wrong, but is it #MeToo?

Nabra Hassanen’s murder doesn’t come out of nowhere; it is embedded into the structure of American society

Barack Obama’s legacy is not of change, or even of hope