Brace your wallets, Ramazan is coming 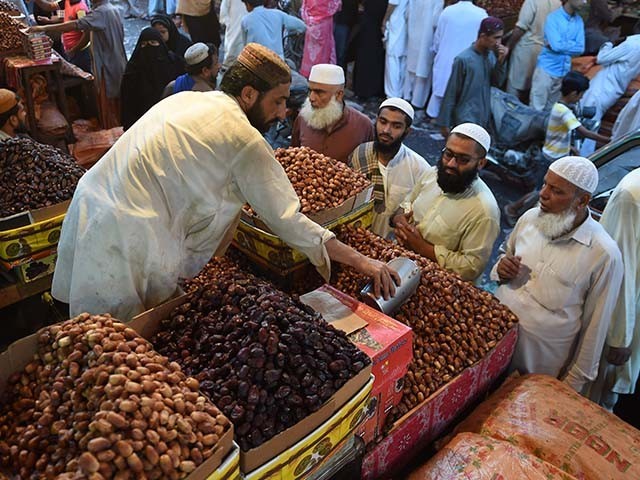 Karachi residents buy dates from a shop at a market in Karachi on the eve of Ramazan. PHOTO: AFP

I first heard the story many years ago, and every year I hear it at least once.  Most Pakistanis are probably familiar with it, but it bears repeating, for those who’ve never heard it.

In the early years of Islam, a preacher from a town sent his assistant to tell the people of a distant village in the mountains about Ramazan. He told them how they would have to get up before daybreak, eat food and drink water, then go without water and food until sunset, beginning with the appearance of the new moon and ending with the appearance of the next new moon.

“But why should we have to do it?” they asked.

“Because Ramazan is coming,” the assistant replied.

Now, it so happened that no one in the village had ever seen a camel, so when a man appeared the next day riding a camel, they thought the camel was Ramazan. They immediately slaughtered it, and did not fast that year, until the preacher heard about it and lost his temper.

Of course, this does not explain why prices rise so sharply a couple of weeks before the holy month and continue rising during Ramazan (even though there is no shortage of edibles and other items).

This year, 15 days before Ramazan, the price of onions rose by Rs5 per kilogram.

“Ramazan is coming,” said the vendor, as if that was an adequate explanation.

When I pointed out that the holy month was still two weeks away, he shrugged and said,

“As it comes nearer, prices will go up more.”

Yesterday, three days before the month of fasting, onion and potato prices were Rs15 higher per kilogram than last week, while bananas were selling for Rs120 per dozen, compared to Rs80 just two days back. Again, when I protested, the answer was,

“Don’t you know? Ramazan is coming!”

In most other countries, around Christmas for instance, food prices stay the same, while prices of shoes and clothes actually go down, but in Pakistan, for some reason, prices go through the roof a few days before and during Ramazan.

Let’s take a closer look at the supply and demand excuse given by most retailers.

Does the population of the country suddenly shoot up in the months before Ramazan? There is no evidence for this. Okay, we know that most employed people in the country are paid an extra month’s salary during the holy month. Since the minimum salary is Rs13,000, most men are in a constant struggle to survive, and so cannot even think of buying sugar or fruits in the 11 months before Ramazan. This is true particularly for those with six or more children; and such people form the majority and the poorest section of society. But will the extra money make a worker want to buy more fruits and vegetables, or sugar, or even clothes?

I asked my driver,

“I’ll pay off a loan I took from my neighbour for repairs to my house,” he said.

Everyone I asked – the office peon, the security guard and others – said they would spend the extra money to pay off their debts, since they have to borrow money to survive, usually with a high rate of interest. None of them said they would buy more eatables, clothes or shoes for themselves or their families.

It should be noted that prices start escalating two weeks before Ramazan when people have not even started fasting yet. So obviously, the reason is not a sudden spurt in demand, but something else is at work here.

I think it’s the mind-set of our people, who have come to believe that prices should automatically shoot up in the holy month. Everyone, therefore, expects to be paid more, from truck drivers to labourers, to even telephone linemen and electric utility employees. As I write this, all the telephones in my office are dead, and next week, the lineman will turn up and look at me expectantly, and I’ll have to pay him Rs500 for doing something he is being paid for (I also strongly suspect that he has deliberately disconnected all my phones just to get bakhsheeh (tip). And if I refuse to pay him, he will say,

I know people will find it hard to believe, but there was a time when government officials used to go around the city, arresting or penalising those who would charge more for eatables during the holy month. A couple of years ago, I was in a shop in Clifton when a government official asked the owner why he was selling sugar for Rs10 more per kilogram as compared to the price issued by the government (which at that time was Rs50 per kilogram). He answered,

He was fined Rs5,000 but that was the last time it happened. I do wish the authorities would continue doing it, not only during Ramazan, but throughout the year.

Otherwise, I request the prime minister and national assembly members to make it a law, not allowing prices to shoot up immediately before and during the holy month of Ramazan. But whether they do it or not, it seems that nothing will change and the looters will go on plundering, and we the common people will go on suffering.