My first bribe: Pakistan brings out the worst in me 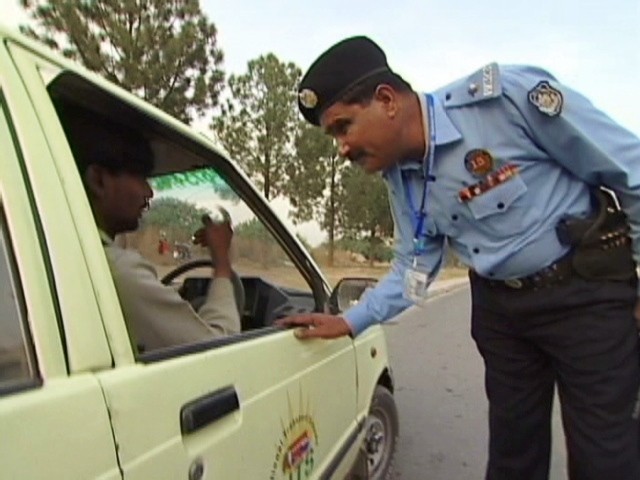 I had never paid anyone any sort of bribe in my life and had no intentions of starting then.

I’ve lived in the UK most of my life and visited Pakistan last summer after five years. I was simply overwhelmed when I arrived at the airport and was smiling at everyone and everything I saw.

Unfortunately, my feelings of  joy came to an end soon enough.

I waited at the baggage claim for the last piece of my luggage -a lawnmower that that my grandfather had requested – for half an hour.

Finally, I saw the big orange box. It was sitting on a luggage trolley along with another suitcase. Standing next to it was a tall, grey-haired man in a black suit.

I walked towards the trolley and asked if I could see the box (which had my name written on it in big black letters). After I threatened to call security, he complied with my request.

The man shifted the box off his trolley, put it on the floor next to me and swiftly started to walk away.

As I tried to stop him, he turned around and said,

I was shocked at his audacity!

A fat man with a big moustache checked our luggage. His eyes lit up when he saw the lawnmower. He gave me a price that was double the amount that I knew I should pay.

It was obvious that he was trying to make some extra cash. I tried to explain that I had done my research and he was over-charging.

The man grew indignant; he said I was accusing him of corruption.

The argument drew a crowd. One of airport officials casually asked me how many mobile phones I had with me. I did not reply.

After arguing with me for some time, the customs official realised that I wouldn’t comply with his absurd demands and told the spectators to clear out.

When they were all gone, he took me to a corner and asked me if I could “help him out”. I was confused. I had no idea what he meant at the time.

He made an unambiguous gesture, rubbing his thumb and forefinger together. He wanted a bribe.

I had never paid anyone a bribe in my life and had no intentions of starting now.

I asked the officer if I could go over the gate and speak to my mother, who had come to receive me, but he declined.

After contemplating for a while I reluctantly asked him what he wanted.

“Do you have any pounds?” he asked with a devious smile.

I felt disgusted but took out a twenty pound note from my bag and handed it over.

Before I could say anything else, he waved at two of his colleagues who hurriedly escorted us and our lawnmower past the gate and into the arrival hall.

I ended up not paying any duty on the lawnmower.

As I sat in the car, I realised that airport officials are the first point of contact for everyone entering the country. Did they treat everyone like this?

Would a foreigner ever come back here after being treated like this and nearly having his luggage stolen?

I contacted the airport officials to tell them my side of the story. I was told to write a letter but it has been months and I still have received no reply.

A British Pakistani living and studying in London.

This is what 'Pakistan' means to me

My sister: Always the apple of my eye

The man who taught me how to give