While doctors in Punjab and Sindh struggle to make ends meet, K-P emerges as a heaven for doctors 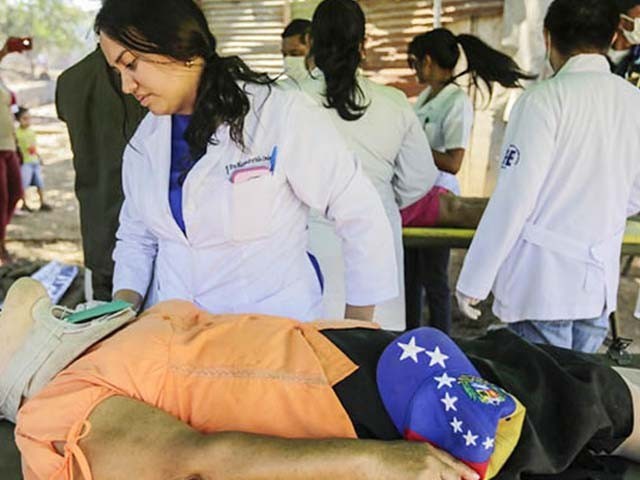 This new pay structure has forced many Punjabi doctors to re-explore their family trees in hope of acquiring a K-P domicile. PHOTO: AFP

“You sow in tears before you reap joy.”

The statement by Ralph Ransom, author of the book ‘Steps on the Stairway’, falls short when applied to the doctors of Punjab. They sow day and night for years, only to pluck disappointment and cold shoulders.

Frustration, desperation, sweat and tears flood every corridor and hallway of every medical college. The story of a medical student in Pakistan trying to become a doctor can very well be compared to a person trying to make it to the end of the tunnel, only to find out that the light at the end is not the promised land of milk and honey. In fact, it is time to draw out sails to counter the storm before there is any chance of smooth sailing.

Almost everyone is well versed with the imperishable tale of Pakistani doctors and their on-going struggle for a more fitting payment structure. The budding lot of medical doctors have staged myriads of erratic protests on numerous occasions refusing to work, at the same time employing all possible tactics, be it clean or dirty, but have always appeared to be running on a hamster wheel without reaching their desired goals. Perhaps this hollow and toneless endeavour may be attributed to poor crafting of the movement and lack of participation of the community of doctors as a whole.

The compensation fabric for doctors in Punjab, being comical on one hand, is also a matter of serious concern as the fate of many families depends on the salary of their only working child who unfortunately holds a Punjab domicile.

The Punjab government has given a new perspective to the term ‘cheap labour’. The fact that the nursing staff is paid more than the house officers, while resident doctors are being paid less or nothing at all, reflects on the imbalance and inadequacy of our health care chassis.

How can one expect doctors to treat their patients with dedication and a clean conscious when they themselves are barely making ends meet?

It is imperative to highlight that the angle is not to portray doctors as victims of social and moral injustice, as often many times doctors are at the crux of everything unethical and vile.

For the uninitiated minority, there are two mainstream narratives floating in the minds of the general public. First being that the title doctor is a respectable guise for a parasite, the only difference being the nature of the abuse. Parasites suck blood, while doctors suck money. The second account is that doctors have needs too and are worthy of a pay which matches the half a decade-long study period and vigilant nights performing overly-stretched duties.

One aspect worth sparing a glance at is that the occupants of these two schools of thoughts, that is the general public, have statistics which disqualifies them from being credential. A society where the literacy rate is shamed, where a healthy majority resides in villages and owns mind-sets which make the people of the stone age look modern, where the general population refers to a surgeon as a butcher and where a hefty portion of the public prefers going to a so-called spiritual person for curing diseases. Are the thoughts of such people sound enough to be valued or should the opinion of the doctor community be given more weightage?

If public medical school graduates, who have almost twice the pay (Rs42,000) as compared to their private counterparts (Rs25,000) and who got their degrees by paying money equivalent to one month’s electric bill of a family of three, can demand a pay raise despite earning more, then the case of the private medical graduate’s merits precedence.

Keeping all political biases and point scoring at bay, it would not be an overstatement to say that the Khyber Pakhtunkhwa (K-P) province has for the first time emerged as a heaven for doctors. The house officers, training medical officers, residents and specialists are given compensation at an all-time high rate. All the districts are divided in three categories: A,B and C with compensations ranging from Rs55,000 to Rs140,000 which has finally put a stop to the efflux of our top notch doctors from K-P to foreign lands such as the UK, the US, Australia, Canada, Saudi Arabia and the Middle East.

House officers in K-P receive a booming Rs65, 000 and the resident physicians earn a record breaking Rs110, 000, while the rest of Pakistan with Punjab and Sindh at the top are caught up in the whirlpool of shortage of medical practitioners.

Even without amplification, the positivity which K-P holds for doctors can be seen and heard loud and clear across Pakistan. This new pay structure has forced many Punjabi doctors to re-explore their family trees in hope of acquiring a K-P domicile. It is about time the piñata treatment of doctors at the hands of the Punjab administration is stopped and special lessons are taken from the K-P health ministry to make Punjab at least half the paradise which K-P is for doctors.

The author is a medical doctor based in Islamabad. He tweets at @drkhalidshab (twitter.com/drkhalidshab). You can follow him here www.facebook.com/rajakhalidshabbirofficial/ .

With PTI now in power, will young doctors in Punjab finally be free of CIP?

If Saudi Arabia and other Middle Eastern countries can practice safe and hygienic qurbani, why can’t Pakistan?