Half Girlfriend fails to even half-impress the audience 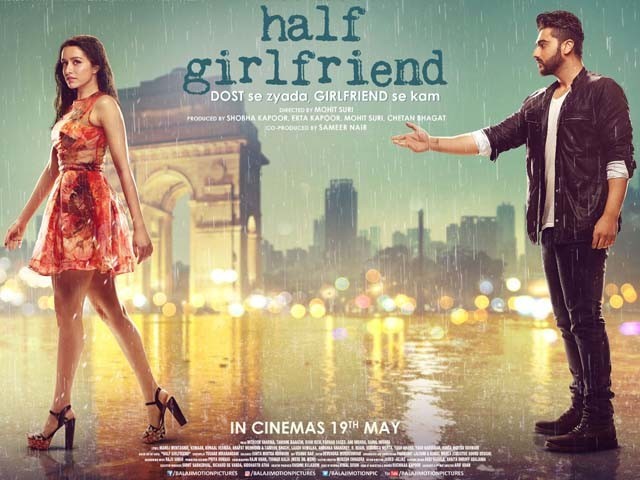 The movie is a 135-minute long scene-after-scene narration of many characters trying to say something.

Half Girlfriend, directed by Mohit Suri, had to be a coming-of-age movie as well, but it did not live up to its expectations. The movie will prove to be quite a disappointment for those who have read the book written by Chetan Bhagat.

Arjun Kapoor plays Madhav Jha, a boy from Bihar while Shraddha Kapoor plays Riya Somani. From the beginning of the movie, it is quite evident that both characters are poles apart. Where Madhav can’t even construct one coherent sentence in English, Riya speaks fluent English and belongs to a rich family, a life Madhav could only dream of.

The movie begins just as any other typical college movie would; Madhav falls for Riya the first time he sees her playing basketball and a friendship begins to brew. It’s evident Madhav likes Riya a lot more than she likes him which is why when he asks her out, she insists on being his half girlfriend. You’ll have to watch the entire movie to figure out her reason behind this.

Just as any good friend would and should do, Madhav’s roommate, Shailesh (Vikrant Massey), insists he shouldn’t get into such a pointless relationship and he should test whether Riya genuinely likes him or whether she’s using him. She further suggests that Madhav should try moving the relationship forward by initiating a physical rapport, which ends up backfiring.

Half Girlfriend is not your average boy-meets-girl movie, but is a ridiculously foolish affair. The romance in the movie does not fully blossom, as Riya is Madhav’s half girlfriend and both characters conceal their true feelings up till the end of time.

Moreover, their on-screen chemistry was lacking throughout the film since the two seemed to be delivering their dialogues without any emotions.

We learn that Riya has some family issues, as her father is abusive and her mother is submissive, but these issues do not play a major part in the movie. One can’t help but wonder why we are even told about them in the first place.

Furthermore, Arjun may be playing the protagonist but he certainly does not look the part. There are movies where protagonists have played roles depicting simple, village-like men, but Arjun sounds and looks a tad bit too annoying. Moreover, his unrefined personality does not complement Shraddha’s charismatic and glamorous character.

There are some extremely ridiculous moments in the movie as well. For instance, instead of using public transport to chase Riya around, Madhav tends to run around on foot.

The movie seems to be towing a political line as well. Current Indian government policies are highlighted and criticised, which is great since movies should be used as a platform to highlight our current realities. But Half Girlfriend left me with a few questions. I couldn’t help but wonder how Madhav received a grant from Bill Gates in order to make toilets in his village’s schools. Why would Gates be visiting a school in Bihar? How did Madhav manage to move Gates so much through a speech in Hindi?

Moving on to direction, I think it is justified to say it was boring and dull, just like Arjun’s lacklustre and monotonous acting. Most of the time, it felt as if he was forcing himself to make facial expressions in order to look like a Bihari villager.

There are various twists and turns throughout the movie, but trust me, even this suspense will not be enthralling enough. By the end of it, you will literally be questioning why you even bothered coming to watch the movie in the first place.

In terms of songs, there are one too many romantic ballads including Tu Hi Hai, Phir Bhi Tumko Chaahunga, Thodi Der, Baarish and Lost Without You. Mere Dil Mein is the only song with a happening beat to it.

Furthermore, by the time the first half of the movie ends, one realises that the characters have not even been revealed entirely. Therefore, the problem of weak characterisation overshadows the movie up until the end. Even Shraddha could not convince the audience with her role. Interestingly, Rhea Chakraborty and Massey as the supporting cast seemed more substantial than the lead characters.

Unfortunately, even the dialogues could not save the movie. There were a handful of one-liners which you may forget by the end of the movie. Even the emotional scenes lacked the required sentiments and feelings. The movie is a 135-minute long, scene-after-scene narration of various characters trying to speak up. It is better to skip Half Girlfriend because it is not even the least bit satisfying.