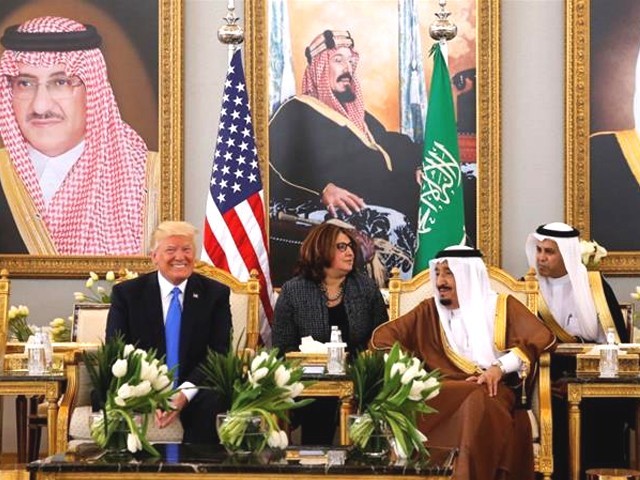 The US president's visit is seen as highly symbolic, as he looks to repair the US relationship with its closest Arab ally. PHOTO: REUTERS

Blowing trumpets, doves flying overhead and the awaiting red carpet. To many, this scenery invokes fairy tales of kings visiting their prefectures on gilded carriages with soldiers in tow. The princes and princesses line up to greet their guest along with the nobility, hoping a beautiful guest from within the entourage would catch their eye and sparks would fly. Not much was expected to change from this picture apart from the medieval setting when Donald Trump landed in Saudi Arabia on Saturday.

This is Trump’s first visit to a foreign country and surprisingly, he chose Saudi Arabia as his destination. Surprising is too mute a word to capture the reality check any reader would have felt when they first heard this; given the fact that Saudi Arabia was one of Trump’s primary ‘hate speech’ targets during his election campaign. Well to be realistic, this U-turn is only a matter of time, usually between a candidate winning the election and becoming an elected official. All idealism goes out the window once the oath is taken and of course, the daily briefs start changing ones perspective on national issues.

Perhaps this change of heart could have been a result of Trump’s meeting with the Deputy Crown Prince Mohammed bin Salman in March or the quiet signing of a $5.4 million one-year contract with the Sonoran Policy Group (SPG), a boutique Washington lobbying firm with ties to Trump’s team. The ministry run by the Saudi Crown Prince Mohammad bin Nayef footed the bill for this contract.

However, the factors for this reversal point more strongly towards the not so quiet alliance developing between Saudi Arabia and Israel, who are both strongly fixated on countering the influence of Iran in the Middle East. Both countries do not openly acknowledge this relationship but Benjamin Netanyahu has alluded to it when pressed in recent interviews.

Given the current state of the American economy and Trump’s promises of creating jobs, there was no easier way than to get involved with the Saudis and get a contract for somewhere in line of $98 billion to $128 billion worth of arms sales. This figure could be forecasted to around $350 billion over 10 years, which easily sounds like the biggest arms deal in history.

Saudi Arabia has also played its cards right as far as American interests in the Middle East are concerned. The formation of the Islamic Military Alliance to fight terrorism has struck the right chords in the West. This is besides the fact that almost all of the international terrorist groups receive patronage from ‘certain’ Gulf countries, who are all part of the military alliance.

Conspicuous enough, the countries battling terrorists within their borders or giving support to fighting terrorism in other allied countries are missing such as Iran, Iraq and Syria. This has of course tainted the alliance as being ‘sectarian’ in nature despite General Raheel Sharif’s condition that he would become commander-in-chief of the alliance only if Iran was included. Knowing American and Saudi policies in the Middle East, the chances of this happening are none at best.

Prime Minister Nawaz Sharif is also flying to Riyadh to be part of the festivities. He will probably be there in time for Trump’s speech on Islam, which will be heard by the attending dignitaries from the Islamic Military Alliance countries. In case you thought it is a typo, it’s not. McDonald Trump is giving a lecture on Islam to Muslims. (A mental image of Raj from the Big Bang Theory being pissed off at Sheldon for schooling him on Indian culture comes to mind). To be more precise, Trump’s Islam speech is being written by his presidential adviser and speechwriter Stephen Miller, a known Islamophobe and the architect of Trump’s ‘Muslim ban’ executive order along with Steve Bannon. Here is a factsheet on him for those who would like to know more about him.

Since there will be numerous other dignitaries at the conference in Riyadh, the only meeting that Nawaz can have with Trump will be introductory at best. With the Saudi royalty and other invitees more focused on the American president, it would be prudent for Nawaz to concentrate on meeting other Muslim delegations. Frankly speaking, given the agenda Trump is coming to Riyadh with, it is safe to assume that Nawaz will not be the Sharif he will be interested in meeting.

Unfortunately, the Muslim world is about to be schooled in Islam by the most loose-tongued president in recent US history. What is worse is that most Muslim leaders will listen to his rant and take it to heart like they always do. I just hope the hosts serve ample steak and ketchup to keep Trump happy enough not to be a total embarrassment; otherwise, Muslims across the world will have to bear the brunt of his Islam speech. Where is a Russian delegation when you need one?