They smuggled my poems to Delhi too 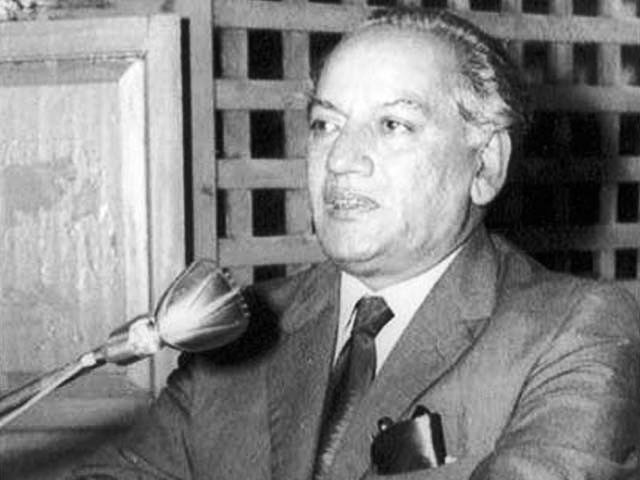 It is natural for Pakistan, of course, to celebrate Faiz but the person and the poetry have also won admirers far beyond our lands.

At Jamuna’s bank, I, too, got my blessed Ganges bath, so to say.

These are the days of Faiz dip. The centenary festival is on the move. It is natural for Pakistan, of course, to celebrate Faiz but the person and the poetry have also won admirers far beyond our lands. India, in particular, has a claim on Faiz in that an entire epoch of Faiz’s poetry was written in the undivided India. It was also the days of the Progressive Writers’ Movement, which for a decade and a half dominated the literary scene in the subcontinent.

Faiz’s poetry immediately after the partition was a continuation of the effort. Deriving fresh energy from his experience of a cruel imprisonment, it touched new heights and resonated beyond Pakistan and India. It is in this context that the Faiz centenary is being celebrated. Call it the Faiz immersion festival for it seems everybody having to do with literature appears to be keen to say something and be counted.

So I, too, took the opportunity to speak. And where? At Sahitya Academy, right in New Delhi, the Indian capital.

Sahitya Academy is India’s representative literary institution. When India gained independence there was a comprehensive effort to chart its future. This included planning for literature, arts and culture. In this, Maulana Abul Kalam Azad, then education minister, enjoyed Prime Minister Nehru’s blessing. Several institutions established as a result have grown and prospered. These included Sahitya Academy of which Prime Minister Nehru, himself a renowned writer, was the founding chairman. Apprehending perhaps that this may become a precedent for future prime ministers to head the Academy, it was formally decided that no minister will chair it. In fact, ministers and civil servants should not have anything to do with its affairs. It is the Indian writers therefore who have been electing its chairpersons. Recently Dr Gopi Chand Narang, an Urdu writer, served as chairman. His term having expired, a renowned Bangla writer, Sunil Gangopadhyay, has succeeded him. It was the new chairman who presided over the opening session of the seminar. In his presidential address he paid rich tributes to Faiz, the poet, as well as Faiz, the man.

Faiz’s daughter Muneeza Hashmi was the chief guest. The seminar was opened by Zahra Nigah. Zahra is a charming speaker. Faiz used to be her guest in London. She, therefore, had the opportunity to observe him up close. It was wonderful hearing to her. Then, significant in its own right, was a daughter’s account of her father – part Urdu, part English.

Dr Narang was the keynote speaker. Unlike many writers whose speech does not measure up to their writing, he is a great orator as well. I have heard him speak on some quite abstruse subjects and make them eminently accessible. Speaking of Faiz’s poetry, he said the poet has started a great fire whose brilliance seemed to be increasing with time. The way it blends a revolutionary thought with an aesthetic quality generates a pathos rich in healing power.

From there on it was three days of session after session. Delegates from all over the world spoke in English, Hindi and Urdu. Besides Muneeza Hashmi and Zahra Nigah, Pakistan was represented by Asghar Nadeem Syed who read a much appreciated paper. In a humble way I too participated.

One of the delegates from the West I recognised as soon as I saw her was Christina Osterheld, the famous German scholar. Bedar Bakhat and Dr Taqi Abidi had come all the way from Toronto.