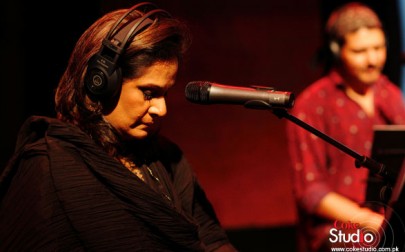 They move us, inspire us, take us back to our roots, and entertain us. Inculcate pride of our culture and heritage. Allows different musical traditions to come together and create magic.

In my research on history, particularly pertaining to the influences and traditions of the Muslim Empires extending from the Prophet’s (PBUH) time until the Mughal Empire, I could not help but marvel at the close parallels between the “traditions” of Coke Studio and 8th Century Muslim Andalusia (Southern Spain), the Ottoman Empire of Turkey and later the Mughal Empire of the Subcontinent.

Historical traditions quote that Spain was conquered in 711 by Tariq bin Ziyad (hence the name Gibraltar – Jabal al Tariq of a mountain in Southern Spain). During that time, art, science and culture flourished in that area under the Muslim caliphate. The region had a huge population of Jews and Christians who were eminent scholars of that time. Instead of being shunned and persecuted, they were given a special status in the society and were taxed (as in the later Islamic Empires – Jizya) to protect their rights and freedom. Under this, a new tradition blossomed.

The traditional music of Al-Andalus was jealously guarded by the natives. It is here that the ‘ud (lute) was invented which was the predecessor of the instrument we enjoy the most – the guitar!

Muslims, Jews and Christians used to come together, bring in their own musical influences to create wonderful pieces of art. A Muslim connoisseur is credited with the perfection of the lute, introducing the “Do Re Me” notes, asserting the need for different clothes for different seasons and the most important of all, three course meals. His name was Ziryab from Baghdad.

Putting that aside, the music tradition that took birth there was extraordinary. It retained the classical Spanish Flamenco roots which were based on rhythmic claps, banging on percussions and an elaborate plucking of the lute (‘ud). However, it also accepted the Berber and Arab influences that came in from the Muslim world. The Sufi mystics also found the perfect opportunity for devotional expression and resorted to these creative means.

This video is from a Spanish movie “Vengo” shows a (contemporary) look at this tradition.

Then rose the Ottoman Empire from the ashes of Muslim Iberia after the Spanish inquisition. Istanbul (formerly Constantinople) became the culture and coffee capital of the world. Trading started with the rest of Europe in coffee. However, the Sufi traditions of the whirling dervishes under the teachings of Maulana Jalaluddin Rumi took music to the next level. The ecstatic dance rituals and the devotional music of which every note, every moment “meant” something, carried special weight. Although the Dervishes were often criticized by the clerics, they maintained their “Welcome to All” approach to faith. The instruments from Western Europe including variants of the Violin and the Flute (ney) were used in their music. Alas, the Ottoman Empire fell and Mustafa Kemal Ataturk reduced the Sufi rituals to a mere “cultural spectacle”.

While the Ottoman Empire had an increasing influence in the Middle East and Europe, the Mughal Empire rose in the Subcontinent and brought Muslims in power who were a minority in the region (particularly towards India). The Kings faced a difficult situation since their traditions were at odds with those of the Hindus. However, the Sufi traditions from Baba Bulleh Shah, Sachal Sarmast, Abdullah Shah Ghazi, Baba Farid Shakar Ganj and many more served as a bridge between both cultures.

The genre of Qawwalis as the “Muslim” devotional music was born where the devotional poetry praising God and the Prophet (PBUH) allowed the Muslims to retain their religious thinking and integrate in the culture. The sitar, harmonium, tabla, veena, iktara and rubab were fundamentally used. Each instrument was native to a particular region and was used in accordance with the content of the song. Oftentimes, the Hindus used to be one of the instrument players in the Royal courts of Akbar and Shah Jehan reciting ecstatic poetry of the Sufi saints. The famous Tan Sen converted to Islam after being mentored by one of the greatest Sufi mystics, Shaikh Mohammad Ghaus in Fatehpur Sikri.

It allows us, the youth to connect with the likings of our parents and grandparents.

Aren’t we suddenly proud of our own music?

Sufi music has a new meaning. It is suddenly approachable to the youth who have been labeled as “barren on spirituality and thought.”

Although I have been very close to these Sufi traditions after rediscovering it all during a research for a presentation two years ago, I am glad that I can connect with my friends on this level. My family has had a beautiful tradition of seeking guidance from these Sufi mentors; I had never known what it all actually meant until I rediscovered it myself.

And when it comes to harmony; we can see how the “rockers” are playing the guitar with such pleasure while Tina Sani recites a Sufi kalaam while a Christian drummer lends his skill to the entire composition. I would like to call this nothing short of magical.

Don’t we just wish that our country was run this way?

A marketing professional based in Karachi with a fiery passion for food, coffee and a keen interest in history and Sufi poetry. He tweets as @suhaibjalis (twitter.com/suhaibjalis)