Dear thin people, I think we need to have a talk 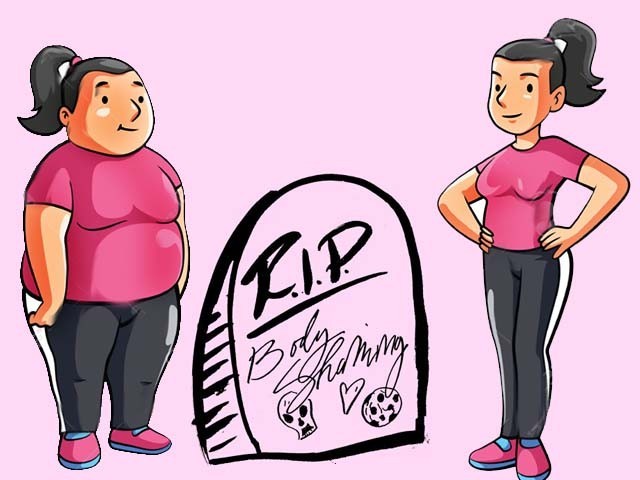 Real women are such because they identify as women, curves or not. And referring to someone’s partner as a dog just because they like someone’s body is degrading. Right?

I am five-foot-four, 125 pounds. My measurements are 36-28-38. I wear size medium shirts, size seven jeans, and (in case you were wondering) size eight shoes.

I have never walked into a clothing store unable to find items in my size. I have never been asked to pay more for a seat on an airplane. I have never had someone dismiss me as a dating prospect based on my body type, nor had someone scoff, openly, while watching me eat french fries in public. I have never experienced a doctor dismissing my concerns with a “lose weight, feel great” remedy. And I can open an article with my measurements without any fear of judgment.

I walk through this world as a thin person. And as such, I have never experienced fat discrimination.

That said, I want you to know two things:

1. I am writing this article from a privileged perspective; and

2. I am not here to damn, guilt, or embarrass thin people

But I think we need to have a talk.

Because it’s so easy to fall back on tired old excuses for why we’re not privileged – and I see this a lot when the topic of thin privilege is broached.

“How can I have thin privilege? I feel like s*** about my body all the time! That’s not privilege! Besides, someone called me out on my ‘chicken legs’ the other day and how is that different from calling someone fat? And I’m only thin anyway because I have an eating disorder, and trust me, that is not a privilege.”

And I hear what you’re saying.

But I think it’s time for us to look at these excuses (and how they don’t hold up in the grand scheme of things) a little more closely.

Let me start off by saying this: Having your feelings hurt sucks.

And I would never tell you to just “suck it up” or “get over it”.

Because yes, sticks and stones may break your bones, but damn it, words really can hurt you. And so can the general attitudes and behaviours of others.

I’m not here to tell you that your personal grievances don’t matter. Rather, I’m here to put those feelings into perspective.

Because personal emotional impacts simply are not the same as oppression. Oppression involves,

“The systematic subjugation of a group of people by another group of people who have access to social power, the result of which benefits one group over the other, and is maintained by social beliefs and practices.”

In other words, oppression is a special kind of problem.

Here are four reasons why:

It is woven throughout social institutions, as well as embedded within individual consciousness. For example, if you make a “fat joke”, everyone around you is going to understand it – because the cultural belief that fat is something to laugh at is widespread.

Structural limits significantly shape a person’s life chances and sense of possibility in ways beyond the individual’s control.

Take a look at these examples of thin privilege. By virtue of not having access to these privileges, the lives of larger people are limited.

Dominant or privileged groups benefit, often in unconscious ways, from the disempowerment of subordinated or targeted groups. Think of the example that I gave earlier about not being passed over as a dating prospect. I benefit from fat discrimination because I’m more likely to have my OKCupid message opened since I have ‘thin’ or ‘average’ checked off in the ‘body type’ box. I’m more likely to get a date.

4. The dominant group has the power to define and name reality

That is, they determine the status quo: What is “normal,” “real,” or “correct”.

Take a look at (almost) any store window mannequins or fashion magazine. If thinness is heralded as the status quo, then that continues to put thin people in positions of power when it comes to determining what “average” (or “preferable”) is.

When you have hurt feelings – legitimate as they are – it isn’t the result of subjugation. The negative attitudes toward you as a privileged person aren’t pervasive, restricting, or hierarchal. You aren’t losing out on anything just because someone’s words, actions, or beliefs had an emotional impact on you. And when you move past it – even if it takes years of work, which it very well may – that’s it. It’s over.

Oppression doesn’t work the same way. Oppression never goes away because everywhere you go, everything you see, and everyone you know reiterates and reinforces it. And that’s a significant difference.

But thin people can hate their bodies

I made a video this summer called ‘How to Get a Bikini Body’. It repeated the oft-seen-on-social-media body-positive mantra “Put a bikini on your body!” theme. And people were quick to comment that my message lost its meaning because my body adheres to societal beauty standards.

And this pissed me off. Because I wanted to be like,

“Well, thin people can hate their bodies too, you know! Just because you think it’s ‘perfect’ doesn’t mean that I don’t struggle with it!”

And does that suck?

But the difference between these negative feelings and fatphobia is this: The only person worrying about whether or not I’m meeting beauty standards is me.

And that’s not the same for fat folk.

And while your internal struggle is real and significant, the point is: You might hate your body, but society doesn’t.

But, but, but, skinny-shaming!

Before you worry that I’m going to disregard or otherwise undermine the bullying involved in skinny-shaming, let me reassure you: I’m not going to do that.

Let me address here and now (and loudly) that no one should ever be shamed for their body. I believe whole-heartedly that the body-positive community needs to be open to all body types. And absolutely, it is problematic that people engage in making fun of thin bodies.

I would never tell you that jabs at your “chicken legs” or insinuations (or outright proclamations) that you must have an eating disorder aren’t hurtful or that their effects aren’t far-reaching.

But what I am going to argue is this: As horrible as skinny-shaming is (and it is!), what makes it different is that it does not involve a pervasive fear or hatred of thin bodies.

And while its personal effects are certainly influential, it is not restrictive on a social level.

Let me be clear on two theories that explain how skinny-shaming is fundamentally different from fat-shaming:

1. Skinny-shaming as a response to fat-shaming

Have you ever heard the supposed-to-be-empowering phrase “Real women have curves”. What about the cringe-worthy assertion that “Only dogs want bones?”

Real women are such because they identify as women, curves or not. And referring to someone’s partner as a dog just because they like someone’s body is degrading. Right?

But these types of reclamations of fat pride wouldn’t need to exist if fat-shaming wasn’t a thing. These types of phrases and attitudes were born of a need to say “I’m beautiful, too!” They’re responses to social norms. And while you can argue that they’re misguided, they’re actually challenging fat-phobia. And while you certainly shouldn’t encourage them if they feel like put-downs, what you need to remember about these phrases, in the words of Lindy West is,

2. Skinny-shaming as rooted in sexism

It’s absolutely true that regardless of what our bodies look like, society polices them. And that’s because patriarchal structures benefit from this policing. And arguably, skinny-shaming is rooted in this type of sexism.

Society wants you to recognise that being thin is “in” – but not too thin, not that thin – because the goal is to keep you insecure.

Take a look at any tabloid cover.

The “So-and-So Has Cellulite!” headline is right next to the “Does So-and-So Have an Eating Disorder?” story. And they both convey the same message: “Ew! Gross!”

And not to go all conspiracy theory on you, but that’s exactly what they want. They (and you can insert anyone you want here for “they” – society, the media, the dieting industry, the executive board for patriarchy) want women to continue to chase after unattainable goals.

But the difference is that the discrimination that fat people experience is at the intersection of sexism and fat-phobia. That is, there’s another layer to it.

So while, yes, shaming anyone is wrong and bad and sexist, fat-shaming is rooted in extra factors that skinny-shaming is not.

So they’re not the same.

Well, I have an eating disorder, so ‘privilege’ doesn’t apply to me

The blog This Is Thin Privilege details,

“When we explain that thin privilege exists despite eating-disordered status, we’ve had thin people with (eating disorders) take offence.”

And I get why that is.

Because having an eating disorder is serious.

And when you feel trapped in and controlled by your body, when you’ve reached that level of self-consciousness, when you’re suffering every single day just to make it through, it’s unlikely that you’ll feel like you’re experiencing privilege.

But, as ‘This Is Thin Privilege’ explains,

“I think it’s important to note that disability is its own underprivileged status, and in this case, thin people with [eating disorders] are conflating the oppression they feel for lacking able-bodied privilege with a negation of their thin privilege.”

But that doesn’t negate your thin privilege.

A person with an eating disorder can experience ableism and still benefit from their thin privilege. Being marginalised in one area doesn’t negate your privilege in another.

Privilege can be a difficult thing to talk about. It’s easy to feel defensive when you mistake someone asking you to check your privilege for them making assumptions about your life. But the bottom line that we have to remember is this: Are my negative experiences related to my body grievances, or are they pervasive issues on a societal level?

And if you have your thin privilege in check, you’ll be better able to recognise that most of the time, these issues fall into the former category.

The writer is a feminist writer and body acceptance activist living in Philadelphia. She tweets @fyeahmfabello