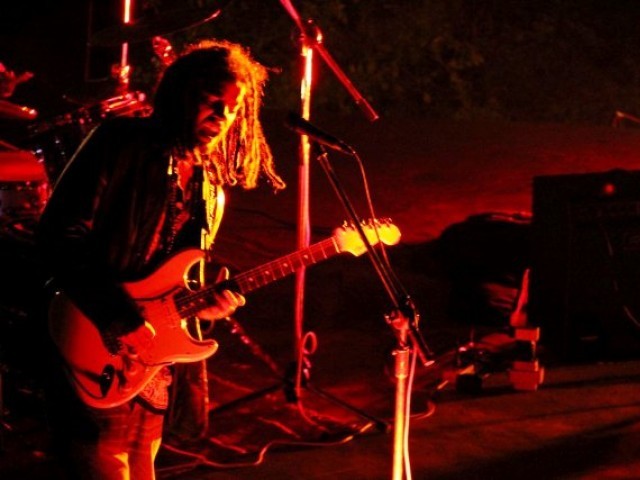 Malang Party can be classified in the list of the very few troops in arms making music for the love of it. PHOTO: HASSAN SHAH GILLANI/KUCH KHAAS

I’ve written countless times about how the music scene in Islamabad needs major rejuvenation. Venues, bands and music fans – everything is scarce.

Most fans listen to what is popular and ignore lesser known bands because the majority is the authority (and of course, democracy is Islamabad’s middle name).

But Malang Party is one band that has continued to make music despite these challenges. And they are doing a darn good job.

Recently I caught up with Zeeshan Mansoor (guitarist and songwriter for Malang Party) and discussed the prospects of music, musical evolution and his approach towards music as a guitar player.

1) How long has it been since you’ve been playing music and what made you pick up the guitar?

I have been playing for a little over 15 years. I began playing because I enjoyed music and especially the guitar.

2) When did you decide to form Malang Party?

My friends, Ayman Nasar and Ibrahim Akram, have known each other for a very long time. We decided to form Malang Party about three years ago, when I returned from university overseas. So when the other guys returned last year we started working.

3) Tell us a little about the guitars/gear you use.

I use Stratocasters and Les Paul guitars, for amplification I use a Marshall 1987X Plexi head and go through a bunch of analog guitar effect pedals.

4) You’ve been in the music scene for as long as I can remember; how has it evolved?

Well, I never thought I was ‘in a music scene’, and I don’t think we ever had a viable music scene where a band or artist could make a living by only playing music without doing something else to survive. In terms of evolution, I guess there are some positives out there such as music venues like The Guitar School and Kuch Khaas. Just listening to 99 per cent of our music, they sound more like commercial jingles than songs.

5) Working with people like Zeb, Haniya and Arieb Azhar, do you think you get the space to express yourself musically?

Yes and no. When you are playing sessions, you just do what needs to be done.

6) Malang Party has performed in Islamabad a number of times, are you satisfied with the response that you get?

Actually, last Friday was our second ever gig in Islamabad, in terms of response let’s say we are very pleased and happy. With all those who showed up for the gig, and for the future it’ll be great to be able to play for more people.

7) Is there a particular message behind the lyrics of your songs namely Bara meel door and Dil jalay?

8) Are there any plans to release an album?

9) Which other bands in Pakistan do you think are doing a good job?

10) Would you like to give a message to your fans?

A photo blogger who works for a Telecom company who loves to write and plays the guitar.

Kill them, kill them!

Kill me, for I have spoken

An interview with Brooklyn Qawwali Party