India prides itself as a tolerant and multi-ethnic state, but is it really? 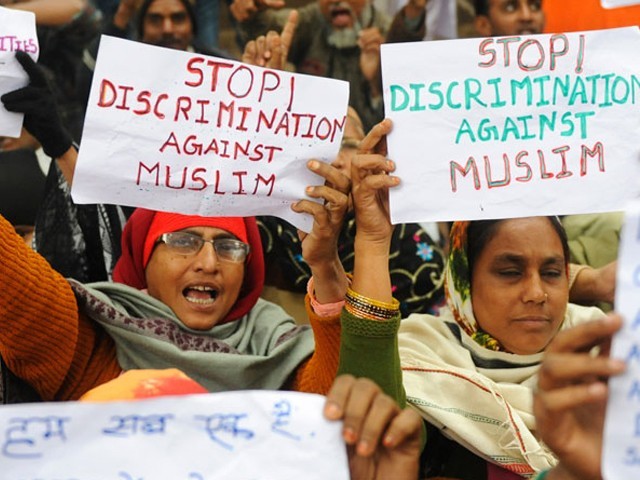 Muslim women from Indian state of Gujarat shout anti-government slogans during a protest in New Delhi on December 28, 2010 against the discrimination, exclusion and persecution of Muslims. PHOTO: AFP

Recently, India has been making headlines for all the wrong reasons. Over the past three years, after Bharatiya Janata Party (BJP) won in a landslide, India has witnessed increased religious intolerance.  Beef has constantly been politicised and electoral rhetoric has constantly used the communal card to pull voters.

During the Uttar Pardesh (UP) elections, communal rhetoric was couched in an extremely hateful language, and in the end, BJP chose a fire brand anti-Muslim to lead as the chief minister, despite the fact that it had other alternatives. After his elections, and despite his attempt to tame down hardliners, the law and order situation in UP has deteriorated, with even law enforcing agencies being attacked in some cases. There have been attacks on Muslims for dating Hindu girls or on suspicion of involvement in beef transportation.

This is not to suggest that Pakistan is better or more tolerant. As a self-reflecting Pakistani liberal, I have been extremely critical of my country’s problems with respect to intolerance against religious minorities.

However, I do think that in some ways, both India and Pakistan are going in the same direction. Yes, there is a difference between India and Pakistan with respect to religious intolerance both in form and intensity. One can persuasively argue that India has not seen suicide bombings against minorities and actual deaths from religious violence are far lesser.

But while India may compare favourably to Pakistan in that respect, it has, nevertheless, witnessed deterioration in recent times when compared to its own past. This is a fact and not some media-cultivated fabrication, no matter what spin you give it. In the past few years, the intolerant voices have gone louder and they appear to have an implicit backing of the state. The fringe right is no longer that fringe; it is making its presence known in the mainstream.

One of the major problems which many from the educated middle class overlooked while voting for Modi (for development reasons) was the fact that the core support of BJP is hardliners, and after being in absolute power, the party had to appease them. Before the elections, and despite clear warning signs, many were simply dismissing such a possibility from occurring. The argument at that time was that with moderate and modernist urban middle class behind the recent resurgence of Modi, the focus of BJP will be more towards governance and leaner and efficient government rather than communal politics. The electorate was so sick of the incompetency of the Congress that it was literally willing to overlook the dangers.

And now the evidence is proving as to how wrong those assumptions were. Not only have the hardliners literally taken over control, but what makes the entire situation ironic is that many educated people from the urban middle class are in denial about it. Rather than opposing the excesses, many are simply calling critics as “sickulars”, “pseudo seculars /liberals“, or terming it as a conspiracy of Indian leftists to malign BJP. Some have gone even further and have started to justify rising hardline tendencies.

I have seen countless posts by educated Indians on social media, justifying the construction of Ram Mandir, despite the fact that the entire issue is extremely complicated and its construction will lead to further widening of the communal rifts. The simple fact that one cannot punish the current Muslims for something which had happened 500 years ago, simply escapes their imagination.

Whipping up communalism by BJP and the Rashtriya Swayamsevak Sangh (RSS) is generally justified by citing examples as to how the Congress too has tried to play on the wicket of communalism by indulging in minority appeasement. Moreover, every time some violent incident takes place, rather than being critical, the focus of many is to simply deflect by referring to either the 1984 riots against the Sikhs under the Congress rule or some contemporary incident where a member of BJP has been harmed or where a minority member has acted violently against the majority. The critics (seculars in almost all the cases) are then mockingly asked to show the same level of anger which they show when minorities are attacked.

There is a huge problem with this entire approach. First of all, it is trying to create false equivalences. Minority appeasement does not create the kind of dangers which whipping up majority communal sentiments does. Although one could make a normative argument against both, but whipping majority communalism can lead to tyranny of the majority and also to violence at a much larger scale. It’s potential to inflict harm is way greater than so-called minority appeasement.

Moreover, India is a diversified and complex country with many ethnic and communal cleavages. To keep the social fabric cohesive in the face of so many cleavages which can always explode is an extremely difficult thing. And to keep everything together with parliamentary democracy is even more difficult. Many of today’s loathed concepts like “minority appeasement” have, in fact, played a role in maintaining social cohesiveness under the democratic umbrella. What is being called appeasement may be in some form an essential compromise to ensure that the country’s social fabric does not tear apart along various fault lines. Indian secularism is not merely separation of church and state but it espouses special minority protection.

Yes, one can argue that perhaps the Congress had gone overboard and had tried to extract electoral mileage out of it, but to dismiss the entire concept as nonsensical and to draw equivalences with violent majority communalism is also not correct.

Secondly, it is much easier to realise that intolerance is being deliberately and explicitly perpetuated by organisations like the RSS and political parties like Shiv Sena. Yes, violence may have occurred during the Congress era also, but did they deliberately whip up hatred against some groups? Did they politicise beef in the same way? Did they draw derogatory comparison between Hindus and minorities by calling the former the “Ramzadas” (offspring of Lord Ram) and the latter “Haramzadas” (bastards)? Did they initiate movements like Ghar Wapsi? All these things have occurred during Modi’s era and his government is either directly involved or have at least shown reluctance in stopping its allies.

Yes, anti-Sikh riots occurred during Congress rule and there one can blame its leadership to incite violence against a minority group, but the way that incident is being used to deflect current malpractices is plain wrong. Moreover, the Congress leadership of the time may have had a falling out with the Sikhs, but there is nothing in ideology of the Congress party which leads to the creation of systematic discrimination against minority groups.

Over the years, India has tried to pride itself as a tolerant and multi-ethnic state. It has tried to contrast itself with Pakistan (which was carved out of British India) by claiming to espouse secular and more liberal values. Its case against the Partition actually hinges on the claim that in a united India, minorities could have lived freely without any fear.

The case against Pakistan by the Congress in the 1940s was not that Muslims and Hindus do not have differences. It was not even whether Hindus and Muslims are two different nations or one nation. Rather, it was the belief that despite differences, India could harmoniously accommodate all.

The real test implication for proving or refuting the Two-Nation theory is what happens in India to Muslims living there. If the hardliners continue to impose their agenda and harass Muslims, while the educated look away, trivialise or find justifications for that behaviour, then frankly, the case for the Two Nation Theory is strengthened.