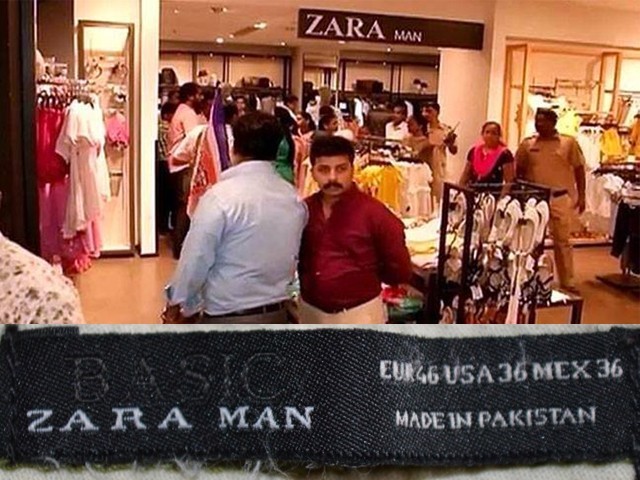 Raj Thackeray’s MNS members went to a Zara outlet in Mumbai and stomped on clothes that were made in Pakistan.

A self-confessed Indian spy was caught in Pakistan to be sentenced to death, so some people in Mumbai went to an apparel outlet and stomped on clothes that were made in Pakistan. Sometimes, facts can be more absurd than fiction.

The store, the ever popular Zara, that carries clothes made in multiple countries, was accosted by Raj Thackeray’s Maharashtra Navnirman Sena (MNS). Hindu hardliners and Indian nationalists all in one, the party is known to take extreme stances on multiple issues concerning Muslims, cows, Pakistan, etcetera.

The violence that the party usually propagates is interestingly in direct contrast with the glossy image India reflects to the world; the land of breakthrough IT, epic cinematography and an evolved and progressive society.

While Pakistan may have earned its negative public relations (PR) globally, ours has been a young nation rife with instability, riddled with terrorism, and lacking the advantages of a long-established democracy. Though burdened with all these issues, corruption to boot, there is a decisively, kindling feeling of society finally awakening from its slumber, and stepping forward towards progress.

India, on the other hand, seems to be going backwards quite rapidly. Recently, a Muslim man transporting cattle in Rajasthan was killed by a Hindu mob. Since 2015, 10 Muslim men have been killed for selling beef, eating it, or slaughtering cows. The negative press surrounding India’s gang rape epidemic have coined it as being a ‘rapist’ nation in the international community.

Many attribute this growing savagery to Prime Minister Narendra Modi, of the hardline Bharatiya Janata Party (BJP). His culture of intolerance and overzealous Hindu nationalism has made the nation regress dramatically. While making the appropriate anti-violence noises every politician must, he appoints anti-minority Hindu zealots in important positions.

While this is admittedly India’s problem, in the spirit of good Samaritanism and largely because our shared borders will always affect us, their growing extremism is worrisome.

Extremism in any form is rejected by all major religions of the world. As a state, extremism and terrorism is being fought vehemently in Pakistan today to favourable results. This is a war we know too well, and our tolerance for it is finally saturated. There are lessons India can and must learn from us.

The weapons they choose to use today to establish an anti-Pakistan rhetoric for political gains will become an infectious disease within, uncontrollable and lethal.

While seemingly unrelated, in my opinion, the people of the subcontinent’s obvious susceptibility towards extremist indoctrination, and the savage frenzy that ensues, is symptomatic of its poverty.

In a society where stomachs are always rumbling, illnesses are rampant and sanitation non-existent, resentment and frustration are natural by-products. Whether they are channelled towards productivity or used to raze and destroy, are responsibilities of the state and its policies. Unfortunately for both India and Pakistan, it is the common man who has been the loser, and the powerful who have been left victorious.

While Indo-Pak relations have always been complicated and ever-fluctuating, as people go, we have many similar problems and common strengths. Despite Hindu fanaticism having penetrated the echelons of industries like Bollywood, our shared music and film industries are testament to that.

Bollywood, which in many ways has paved the way in breaking many glass ceilings, de-stigmatising cultural taboos and opening mind-sets, has become populated by Hindu bigots and bullies who disregard and disrespect fellow Indian veteran actors who happen to be Muslim.

Is this the downfall of India’s progress? Its film industry which generates about INR138 billion seems to be imploding. The losses suffered by recent movies that had Pakistani actors were considerable and unnecessary; also, they were losses footed by Indians themselves.

Vandalising foreign clothing stores, killing people for eating beef, gang raping local and foreign nationals, penalising Indian films with Pakistani actors, bullying Indian-Muslim actors into fearful silence, marginalising minorities – it is time India came out of self-denial and looked in the mirror. Until a nation’s literati and learned bring themselves to acknowledge their collective flaws, they will keep regressing and distrusting even one another. India must focus on its own weaknesses before blaming the neighbours and address the bestiality growing within its previously dynamic and tolerant ranks.