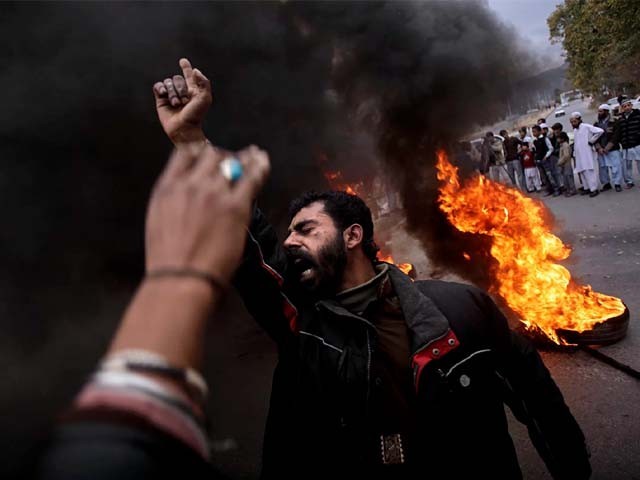 On the one hand, religion is used by the state to exact conformity. PHOTO: AP

This month, the spirit of Cain appears to possess the nation. Within a span of 11 days, there have been two incidents of vigilante mobs responding to ostensible accusations of blasphemy. In the first such occurrence in Mardan, the blood lust was satisfied by murdering and disfiguring Mashal Khan, a bright and principled young man.

In the second incident, a man accused of standing up in a mosque after Friday prayers and making ‘offensive’ statements was brutally beaten by a crowd. His life was saved by the mosque’s cleric intervening and facilitating his transfer to the police.

The fact is that violence following accusations of blasphemy is becoming a distressingly familiar Pakistani phenomenon, as is incarceration and punishment for offending religious sensitivities. In fact, there is a clearly discernible coincidence between state policies and public behaviour when it comes to religious persecution.

Between 1947 – the year of Pakistan’s creation – and 1985, only 14 cases of blasphemy were registered by law enforcement agencies. In 1986, the military regime of General Ziaul Haq made blasphemy a capital offence and broadened its classification. Since that year, over 4,000 such cases have been registered.

In the months leading up to Khan’s murder and the Chitral incident, all three branches of the government had targeted ‘blasphemers’. In January, five secular bloggers were abducted and allegedly tortured for days in solitary confinement. Only one has spoken out, pointing the finger at the top military intelligence agency.

On March 7, 2017, an Islamabad High Court judge, Shaukat Siddiqui, while hearing a petition went on a diatribe against online ‘blasphemy’, declaring it a form of terrorism and demanding that the government initiate a crackdown immediately. Following this, the Pakistan Interior Minister Chaudhry Nisar condemned online ‘blasphemers’ and ordered that action be taken against them. Since then, four people have been arrested on charges of blasphemy and Facebook has managed to shut down 85% of the pages deemed blasphemous.

These developments have also encouraged certain televangelists and social media activists who have embarked on a campaign to identify individuals they deem to be offending religious sensitivities.

The lynch mobs of today have not occurred in isolation. They are no natural expressions or consequences of the Islamic faith but a direct consequence of politicians and other national institutions weaponising religion and utilising it as a political tool – a tool that recruits militants for proxy warfare in Afghanistan and Indian-occupied Kashmir and brings in conservative votes during elections.

Also, when the leadership of a nation repeatedly encourages people to believe that their ‘sensitivities’ are more important than human lives, some of those people will eventually act according to this dictum. This bizarre perception that religious sensibilities must constantly be coddled and every perceived slight pandered to is not an Islamic precept; it is an outcome of decades of conditioning by a power hungry religious and political leadership.

This latter-day inquisition that the Pakistani state has been steadily amplifying since the days of Zia is now birthing vigilante auto–da–fés (act of faith) such as the one witnessed in Mardan and Chitral. If these atrocity exhibitions are to cease, the solution must include the people of Pakistan starting to hold their leadership accountable.

On the one hand, religion is used by the state to exact conformity. On the other, religion also becomes the scapegoat for those who bred and anointed the beast that now stalks free speech and free thinking in Pakistan.