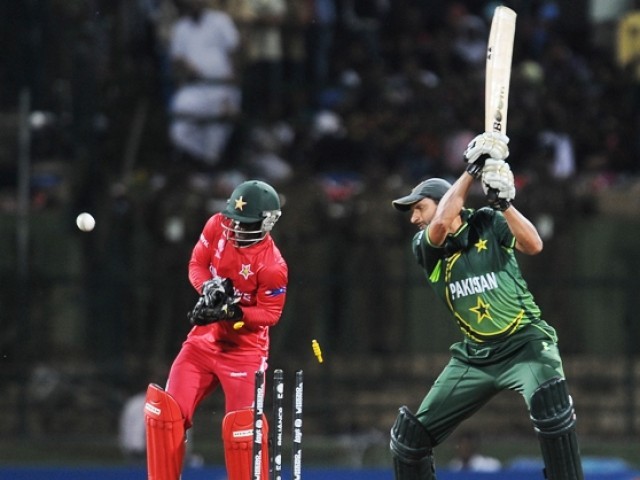 As the 1992 champions aim to get back to winning ways in the World Cup, the team management has the very important task of lifting the morale of a much maligned outfit after the heavy loss to New Zealand.

A lot of criticism has come the way of Shahid Afridi and his men, which would have dampened the spirits of a side that had won three successive matches before facing New Zealand. Here I must emphasise that the situation that Pakistan find themselves in, is not as desperate as most experts have made it out to be.

The team has now qualified for the quarter-finals and the defeat against the Kiwis came at a most opportune time, when they still had games in hand to rectify the mistakes they committed.

One glaring weakness that has been hurting Pakistan, is the poor show put up by the openers so far. Young Ahmed Shehzad has clearly not come to terms with the pressure of playing in such a huge tournament.

It’s now time to try Kamran Akmal as Muhammad Hafeez’s opening partner before the quarter-finals, in order to give him time to settle. Consistent failures from the opening pair has put a lot of undue pressure on the rest of the line-up and promoting the wicket-keeper could be a solution for Pakistan’s opening woes.

Talking about Kamran, inevitably brings up the topic of his dismal show behind the stumps. All the speculation about trying out Umar Akmal as wicket-keeper, is not at all a palatable option in my opinion. Wicket-keeping is a specialist job and trying out a make-shift option will ensure that Pakistan sees many worse days behind the stumps. The management must stick to Kamran, and give him their full support and confidence as he remains a crucial player.

I feel that Afridi has been erring in not playing Saeed Ajmal which is hurting the team badly. Afridi has been the only wicket-taker for the team and has enjoyed little support from the other end. Ajmal is a proven wicket-taker, and although Abdur Rehman does a decent job containing batsmen, he is not as potent as Ajmal. The off-spinner has the ability to apply pressure in the middle overs, and he must be played in the remaining group matches so that he gets the chance to get into his groove.

Pakistan remain a talented outfit despite the blunders that have been committed on the field. There is nothing wrong with this side that cannot be sorted out quickly and there is absolutely no need to panic. The team management will do well to remain calm in the face of all the criticism and concentrate on the task at hand with full confidence.