How the misinterpreted youth of Pakistan are fading away into oblivion 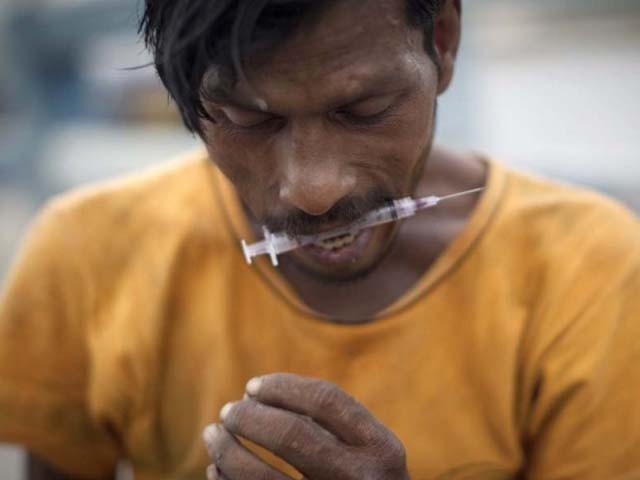 A drug addict prepares to inject himself with drugs. Pakistan has more than four million drug addicts in its population of 170 million, according to figures compiled by the country's Anti-Narcotics Force (ANF). PHOTO: AFP

Addiction is a mental disease that is defined by science as the formulation of dependency on a substance or activity. It can manifest itself into any human being, driving them towards disengagement from reality and secluding them into an abyss of excessive compulsive behaviour.

Addiction can either be chemical or non-chemical. Chemical addiction may include almost anything from the consumption of caffeine by means of morning and evening tea/coffee, to injectable fluids such as heroine, morphine, methamphetamine and other psychotropic drugs.

Non-chemical addiction, on the other hand, is referred to behavioural addictions such as gambling, risk-taking, watching television, playing games, excessive shopping and even love. These examples do not even begin to compartmentalise the reign that addiction as a mental disorder enjoys.

Researchers have shown through various and decades-long experiments that addiction is a malady of the mind and it takes its true form not just through social and psychological risk factors but also from the biological make-up of a human being, that is, their genetics. To put this into simpler words, in relation to chemical abuse, the notion that if a person is addicted then it must be entirely their fault or they have been raised incorrectly, is absolutely off the rails.

When it comes to substance abuse, be it in the form of prescription drugs or whatever one might find in any ordinary street corner, the number of drug users in Pakistan has only increased massively. This increase owes to the lack of proper and fully functioning laws and drug enforcement agencies, lack of education and awareness, and a general lack of empathy for those suffering in this country.

Below are the customary reactions and responses of people in Pakistan upon hearing about addictive behaviour:

“Addicts are thrown out of their homes.”

“The addiction of a loved one is kept hidden from other people.”

“Humein badnaam kar diya muashray main. (You have ashamed us in our society.)”

“Woh nashay karta hai, uss se ainda nahi milna. (He/she is addicted to drugs, do not hang with them.)”

And finally, ladies and gentlemen, our favourite and most frequently used phrase,

Furthermore, a factor widely misconstrued when dealing with addicts is that if all else fails, like the above mentioned measures, showering them with love and care will bring about the change they need so desperately. This, however, is not the right way. It must be understood that addicts have no control over their disease just like a cancer patient has no control over their disease spreading. Addiction is a mental disease and like any other physical disease, it requires a proper prognosis by a medical doctor who can recommend the right course of treatment.

As per the United Nations (UN) office and the Drugs and Crime Report of 2013, there were 6.7 million drugs users in Pakistan, out of which 4.5 million were categorised to be dependent users. Another more recent study showed this number to be as high as eight million users. This number may seem to be small (though it most certainly is not) when we consider Pakistan’s total population of 180 million, but we must acknowledge that this is not just a drug problem, rather it is an addiction problem which is on its way to a downward spiral.

Imagine a seven-year-old underprivileged child getting exposed to an injectable, highly addictive drug like heroine. He gets addicted after using it three or four times and doesn’t realise that his body and mind now crave for it; he is developing horrific withdrawal symptoms if he stays away from it for too long. He is banished from his house, his family and friends no longer support, he finds his way into a community of users, and begins selling himself for money. Ultimately, the addiction is so intense that he develops Acquired Immune Deficiency System (Aids) from using other addicts’ needles. One day, he overdoses and he is forgotten forever.

Such is the fate of most chemical addicts in Pakistan. They are forgotten before they can even understand what they suffer from. It is not bad behaviour or a lack of morals but a genuine predisposition to addictive behaviour which has been brought on by biological, sociological and psychological influences and is in fact a disease.

In Pakistan, the under-privileged and the privileged are considered equal only when it comes to being addicts. We close our doors in the face of their obliteration and leave them to fade away into oblivion, not realising that we are the ones feeding their addiction when we single them out as morally compromised.

This naturally brings up the question as to what can be done about Pakistani addicts who are wasting their lives away. The answer always lies in therapy, counselling and rehabilitation. The answer also lies largely in accepting one’s reality and understanding that addicts need help. Moreover, understanding that they can be helped and that they are not hopeless scraps of human beings is essential in overcoming this problem.

Alleviate Addiction Suffering Trust (AAS) is an organisation that has been working tirelessly for the past 17 years to save the addicts of Karachi and give them a chance at a better future. The non-profit organisation started in 2000 for young adults, but in 2006, they expanded their focus onto children as well upon seeing the dramatic increase of child users in Pakistan.

AAS Trust currently owns seven rehabilitation centres across the city catering the under-privileged as well as the privileged and providing them not just with initial detoxification, but proper rehabilitation.

Abdul Rehman Allana, chairman of AAS trust, started this journey of saving lives almost two decades ago when he spotted an addict on a roadside who had succumbed to the hold of addiction for nine years. It was then that Allana decided that he had to muster all that he could for those suffering from this disease. The AAS Trust’s motto revolves around being a beacon of hope for these addicts and helping them in any way possible. The trust now has several well-established teams of devotees including professional health care providers, psychologists, counsellors, and trustees who go out onto the streets to counsel addicts they find and try to convince them to get treatment. Moreover, therapy sessions are held to educate families and tell them that they can truly get their child back into a fully functional person again.

AAS Trust’s work may go unnoticed but it has a positive impact on our society, on our youth, and on those misunderstood and misinterpreted. It is imperative to understand that addicts are never fully at fault and they need to be helped, protected, diagnosed and most importantly, treated for this tiring and gruesome disease because they too were born into this world like the rest of us and deserve equal rights to live.

To those fortunate enough to read, I write directly to you now. If you are suffering from an addiction of any kind or if you know someone who is, please know and remember the sky has not fallen. AAS trust and their team are ever ready to approach you and give you all the necessary assistance.