Of Halala marriages and the sexual exploitation of Muslim women 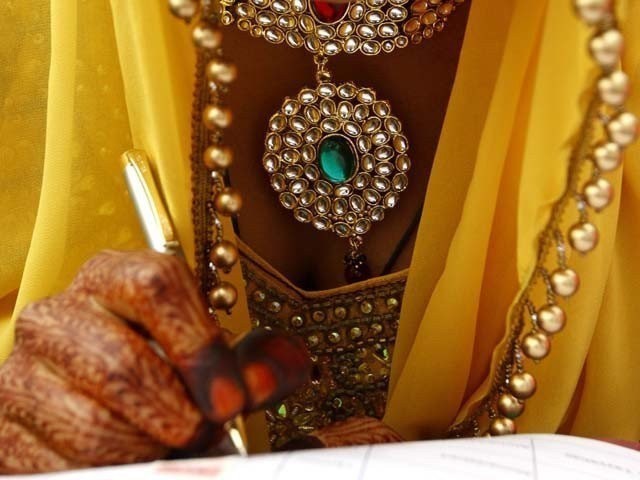 Khola Hasan, a woman from the organisation concludes that Halala marriages are haram and forbidden. PHOTO: REUTERS

According to a BBC undercover investigation, some Muslim women in South Asian diasporic communities in England are facing exploitation, blackmail and sexual abuse via various online accounts. These accounts provide services for divorced women to fulfil the requirement of a so-called Halala marriage, in order to remarry their former spouse after they have been divorced through the ‘triple talaq’ process. Triple talaq takes place when a man says ‘talaq’ (divorce) three times in a row to his wife, convincing many Muslims that this ends an Islamic marriage immediately.

These online services let women pay to marry strangers, consummate the marriage with them and then divorce them, after which they are able to remarry their former spouse. Women are required to pay thousands of pounds to take part in these temporary marriages.

A very small portion of Muslims around the world believe in the concept of Halala marriage. However, by monopolising this practice in a simplistic manner, these services are taking away and misrepresenting the concept of Halala marriages which are stated in the Holy Quran. By doing so, what these services are doing is normalising adultery, infidelity and prostitution in the name of Halala.

Majority of Muslims strongly disagree with this practice because it is a direct consequence of individuals misunderstanding the Islamic laws of divorce. According to the Holy Quran, there is no theological basis for Nikkah Halala in Islam. As per Islamic context, “divorce is twice” after which the husband can either stay with the wife in an acceptable manner or let her go with good treatment. It is unlawful for the husband to take anything of what he may have given to her. It goes on to say that if the husband divorces the wife for the third time, then she is not lawful to him until she marries someone other than him. If the latter husband divorces her (or dies), the woman and her former husband cannot be blamed for getting back together if they think they can do justice to the relation once again (2:229-2:230).

In other words, if a husband divorces his wife by pronouncing talaq, he can revoke the divorce within the iddah, the period of separation that precedes divorce. If the divorce is completed, the couple can remarry. The couple may divorce and remarry twice. However, if they divorce a third time, they can neither unite within the iddah period nor marry again until the former wife marries another man, to ensure that the divorce is taken seriously.

As a result, the above interpretation is used as a scheme to remarry or Halala and is often justified by some as a true belief. Even according to the dated groups who follow this belief, this only applies when the husband declares divorce on three separate occasions and not three times in a row. A Halala cannot be planned in advance, since the Nikkah between the woman and the second husband with a prior understanding of a divorce afterwards will not be valid. If she does so, it will be an illegitimate relationship with the second husband and with the first husband also with whom she comes to live with after a pre-planned Halala. In fact, the Prophet Mohammed (pbuh) has “cursed both men who perform Halala and for whom Halala is performed”.

“There is no concept of Halala in Islam. This is something that has been made by some Muslims and unfortunately is now seen as part of the Shariah by some Muslims. The rule of the Holy Quran is that if a man divorces his wife for the third time in one marriage contract, then the wife cannot go back to the man unless she (genuinely) marries another man and then (genuinely) is divorced by that man… this rule should not be dealt with by pre-planned marriage and divorce.”

For people who still believe in the practice should be made aware of the fact that it is outright wrong to pre-plan a Halala marriage as Prophet Muhammad (pbuh) declared Halala as profane, Hazrat Umar (RA) called it worth stoning, and Hazrat Usman (RA) considered it devoid of the trait of the Nikkah (marriage contract). Such clear verdicts prove that the various online services providing Halala are not in good or correct faith.

Additionally, the East London Islamic Shariah Council which regularly advises women on issues surrounding divorce strongly condemns Halala marriages. Khola Hasan, a woman from the organisation concludes that Halala marriages are haram and forbidden. Instead, she advises getting help or couples counselling.

Therefore, it is clear that what is happening in the UK in the name of Halala marriage and Islam is nothing but a sham and the whole idea is to make money by abusing vulnerable women. These actions are simply based on the financial and sexual exploitation of Muslim women.