Citizens of hypocrisy: Can a petition save Pakistan? 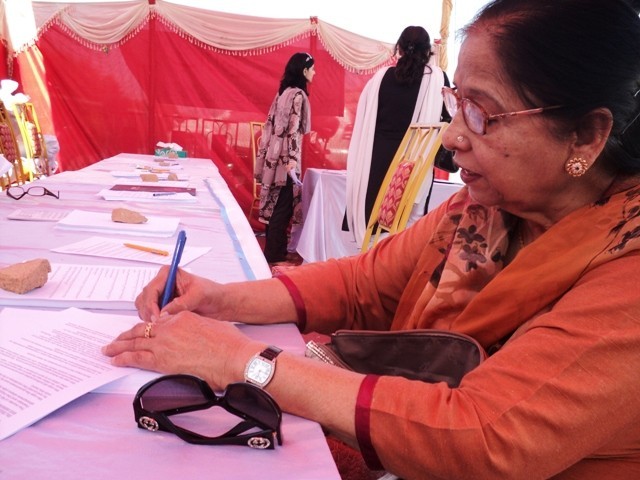 The letters at the campaign contain recommendations for the government. PHOTO: EMA ANIS

At the first protest I attended, Karachi Unversity students were protesting against the frequent riots by student political wings.

It was grand. A large number of young people, full of energy, were screaming, excitedly holding up placards.

Not a single one of them seemed to care about what was written on the placards they were holding. It was all about being at the front, holding the best placard, shouting slogans at the tops of their lungs, and most importantly, getting coverage from the media.

Apart from the burning sun on my head and some tiny pushes from here and there, I admit it was fun. I felt like the most responsible citizen on earth; somebody who cares, somebody who would stand under the open sky to make a difference.

But I was wrong.

I soon realised that protests don’t bring any change at all. They are really just hordes of people on the roads who are trying to represent the physical strength of the ‘awaam’, or showing that they have a ‘voice’.

Recently, I heard about the Citizens for Democracy (CFD), a group of around 80 non-political civil bodies that came together after the murder of Governor Salmaan Taseer, holding a ‘civilized’, ‘silent’ campaign near Park Towers.

I was eager to see how different it would be from the ones I see every now and then at Karachi University.

A perfect protest – but so what?

With growing excitement, I reached the red tent. The banners were still not up and there were only a couple of organisers were present.

As time went by and people started trickling in, I realised it was not the typical campaign where you see huge crowds pushing and yelling. People came at their own conveniece, voiced their opinions and left without creating any fuss.

It was a letter signing petition; the letters were addressed to the key leaders of Pakistan and contain recommendations to the government to act against religious extremism. These were being signed and dropped into letter boxes.

The letters call for justice and say that the murders of Shahbaz Bhatti and Salmaan Taseer should not be justified on ‘religious’ or ‘cultural’ grounds.

CFD has carried out similar petition campaigns in the past and intends to do more in the future. They mostly publicise their events online or via text messages. The people coming in often belong to the elite class. But while there were journalists, senators, artists and other professionals, the organisers urged drivers, labourers and the like to sign the petition as well. They said that they are going to hold similar events at places like North Nazimabad, so that the voice the “common man” can be heard.

This was not the kind of campaign I’ve been to before. I met people like Mohsin Sayeed, PPP Senator Suriya Amiruddin, former mayor of Karachi Fahim Zaman and many others. It was peaceful, but I am afraid even this one didn’t change my perception about protests.

Watching from the sidelines

Although it may be the best way of showing the government that the nation wants to end extremism, it certainly cannot make a difference. And since what I hope do is bring change, I refused to sign this petition.

Unlike the middle-eastern revolutions, these protests don’t have the power to bring about change. This is because the people that gathered today are not ready to be a part of the system they are raising slogans against.

Petitions are easy, participation is difficult.

Can these people run for elections?

Can they become the people we are willing to vote for? Or even go out and vote?

Will they continue to complain to corrupt leaders who have no desire to listen?

If this is how things stand, I refuse to sign this petition.