Is Trump aware of the catastrophic consequences of fighting a war with nuclear-armed North Korea? 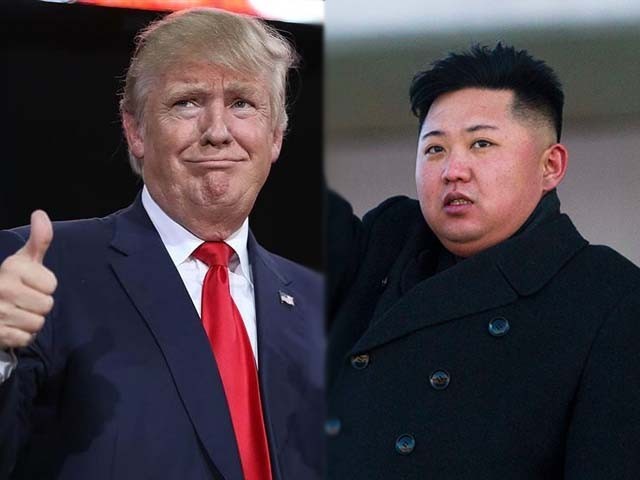 These days, for the most unfortunate reasons, there’s no dearth of events clamouring to grab the headlines in the US. A perpetual flow of rudimentary as well as impactful (read ‘incendiary’) news keeps on piling stress and frustration on those who dare to care.

From the Sean Spicer gaffes to airline functionaries literally trying to beat their passengers to death, to the never-ending Russian hacking saga, the news cycle is as bizarre as it gets.

While the plight of conscientious governance is too hard to miss, what’s worth noting and most incredibly intriguing is how conveniently the Donald Trump administration has within a matter of few days managed to manoeuvre the spotlight. From the president’s never-ending list of debilitating personal, moral and professional shortcomings to, for some questionable reasoning, dropping the ‘mother of all bombs’ on Afghanistan and raising the ante with the destructive North Korean regime that could potentially take us right into the third world war.

As I sat down and watched the Day of the Sun parade this past weekend, I found myself in a rather uncomfortable situation thinking that with Kim Jong-Un and Trump going at each other, is it fair that the fate of the entire world should hang in balance because of the petty nature and egoistic desires of two insanely power-hungry bullies with schizophrenic tendencies?

Granted that North Korea, along with the Saudis and the Chinese, can safely be categorised as one of the worst possible dictatorships of the world, the bottom-line is that any show of aggression against the downtrodden people of that country will only make their lives more miserable. Jong-Un’s sick-minded approach to governance makes North Korean citizens’ lives a living hell.

Declaring a full-scale, all-out war against the communist nation will only complicate matters. Although Trump got everyone excited about a possible strike at Pyongyang, one wonders if he thought about the millions living in neighbouring countries like South Korea and Japan who will be exposed to Jong-Un’s madness and a retaliatory assault (possibly nuclear) on their capitals can essentially spell doom for generations to come.

I’m not building a case for Jong-Un’s innocence here. He is a murderer and a first-degree egomaniac. However, I am trying to understand Trump’s motives. People say that he doesn’t know much about conducting foreign policy and I’d agree to that. I’d extend this argument to say that he really doesn’t know where he stands on issues. I also am aware that he wants to show muscle but lacks the tactical and strategic prowess critical to planning and manoeuvring in a dynamic international environment.

Is Trump trying to impact history and jump start a Communist-West rivalry? Is he aware of the catastrophic consequences of fighting a war with a nuclear-armed North Korea? Is he trying to revive his dwindling political fortunes at home by wooing and winning back his base?

Or, could it be that Trump wants to appease the military industrial complex heavyweights who are persistently itching for the country to engage in international conflicts?

Understood that Jong-Un constantly seeks Western/American attention, aren’t there any smarter means, diplomatic, back channel tools at our disposal to blunt the North Korean menace? Can we ‘buy’ members of Jong-Un’s inner circle and take him out using the Special Ops or the Navy SEALs?

What are the odds that the absurd North Korean leader will manage to check-mate the US and disrupt the international power balance by bringing out from his arsenal some real nuclear weapons instead of the ones that don’t really seem to ever work? What if the draconic accounts and analysis of North Korean defectors about Jong-Un’s chemical warfare aspirations and ambitions indeed turn out to be true?

Knowing is good. Knowing everything is better. We know that North Korea is a nuclear-weapon equipped nation. However, we must also consider all possible repercussions on not only the country’s approximately 25 million people but the regional dilemmas that may ensue. Trump must take time out of his golfing retreats to educate himself and learn the basics of international affairs.

Reasoning and rationality are things of the past. We live in a society where emotions, anxieties, anger, revenge, guns and gusto reign supreme. This is where bombs are considered symbols of freedom and this is where there’s no more talk of peace or peaceful coexistence. In the light of all this, I’m not surprised if Washington will fall prey to a tiny nation’s provocations and make the entire planet pay a heavy price for its fallacious strategic goals.

To deal with the North Korean crisis, what’s needed is a concerted international effort to engage Jong-Un and his rogue regime in a dialogue that’ll mitigate and eventually eliminate any chances of him threatening the US, South Korea or any other nation of the world.

True, such efforts have been made in the past but the past does not necessarily always dictate present realities. With Trump at the helm, one is sure the US can devise an outside of the box, negotiation-centric strategy that can yield effective results. How about getting together with the Chinese and the Russians and inviting Jong-Un over for a summit in Washington DC?

Regardless of whatever happens in this highly agitated and fickle environment, let there be no doubt in anyone’s mind that the concept of war is bad. Period. Wars are a failure of human conscience and dignity; wars herald the defeat of the bravery and the courage to stand up and negotiate through civil and negotiated means; wars are the bacteria that eat up the fabric of humanity in the most undesirable and unfathomable of ways.

The North Korean problem can’t be oversimplified. We are faced with the most absurdly provocative situation that can’t be handled merely by 140-character responses. Trump claims himself to be a masterful negotiator and a deal-maker.

I urge the president to stop spreading toxicity, work his magic on Jong-Un, and prove it to the international community that the US can, for a change, take the lead for establishing peace and that it does not always suffer from a war sugar rush.

There are plenty of ways Trump can leave a mark on history in a good way. Subduing the North Korean juggernaut is certainly a good starting point. In this auspicious time of Easter and Passover, we can all raise our hands and pray for better sense to prevail in the White House, and may the clouds of hatred, animosity and war wither away. Amen!