Learn to be Taliban: K is for Kalashnikov 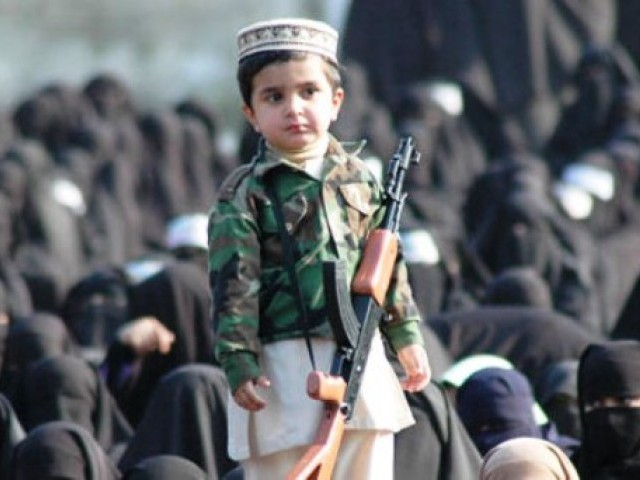 Imagine that you learnt the alphabet and numbers with images of Kalashnikovs and tanks instead of apples and oranges.

During the mid to late 1980s, a USAID funded project printed millions of textbooks in Peshawar. The funds came from Saudi Arabia and the books were distributed amongst school children in Afghanistan and in new madrassas across Pakistan.

These textbooks were prepared to indoctrinate. Specialists from the Afghanistan Centre at the University of Nebraska Omaha received nearly $60 million to develop a curriculum, which glorified jihad, celebrated martyrdom and dehumanised invaders.

By the mid-1980s, the Afghan mujahedeen were bleeding the Soviet Union, hastening her economic collapse and nearing the eventual end of the Cold War.

The schools that survived across Afghanistan along with various madrassas continued using these same textbooks throughout the 1990s and into the 2000s.

Only in 2002 did the process of replacing textbooks begin, however, by then the template had been improved and widely distributed across both Afghanistan and Pakistan. A generation had been born to celebrate death rather than life. They accepted violence as a natural part of everyday life.

The awesome power of education coupled with propaganda has transformed the region over the past 25 years. It should come as no surprise that after the proliferation and acceptance of violence in the classroom, radio and on television screens, children are re-enacting suicide bombings as play.

The fact that the video in question was circulated on social networking sites as something to have a laugh at was quite shocking in itself.

This process was initiated in textbooks. In support, propagandist teachers were co-opted to teach the material with misplaced religious zeal. By the time the Taliban came into power, the textbooks were cleansed of all human imagery.

The Taliban removed all the heads of children depicted in the textbooks. What we were left with were images of headless children carrying Kalashnikovs. As a result violence had successfully been dehumanised. Children grew up completely removed from the consequences of pulling the trigger.

Although the textbooks may no longer exist, they have been replaced by an age of radical websites, audio CDs, DVDs and transferable mobile phone video clips, celebrating martyrdom. Self worth has been devalued, as importance is placed on the afterlife.

Incentives have been created for more death and destruction, as subordinates in an attempt to impress their superiors or stake their claim for leadership, plan and execute grander and deadlier attacks.

In 2002 the Sustainable Policy Development Institute (SPDI) published a report on the state of educational material. Its recommendations are yet to be implemented and its findings have been ignored.

The Army with the help of a prominent neuropsychiatrist is running a successful rehabilitation centre in Swat, called Sabaoon School where children indoctrinated by the Taliban are de-radicalised.

Yet, the same model is yet to be replicated and reforms introduced even though dubious curriculum and indoctrination has been clearly identified as key radicalising factors.

Perhaps one of the reasons why educational curriculum reform does not receive the attention it deserves is because costs borne today may take a decade or more to yield results. Our leaders prefer to promise quick fixes.

Rather than focusing on the empty debate on whether the governors or chief ministers message should grace the cover of textbooks, curriculum must be reviewed to purge it of any material that promotes intolerance, divisions and hatred.

As the body count continues to rise, it is perhaps time we realised the importance of education and counseling in changing our faith.