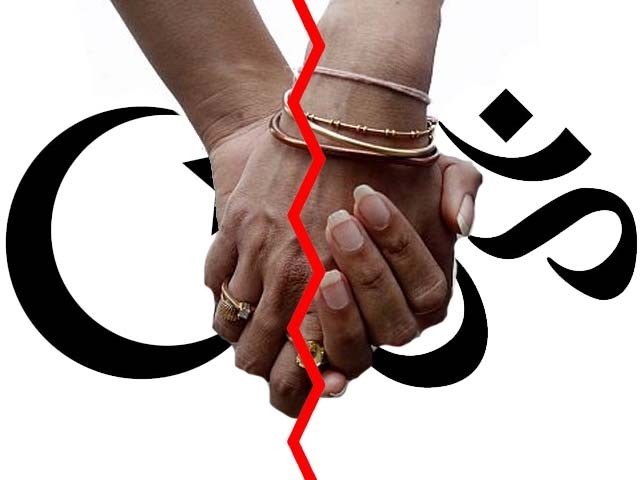 The systematic targeting of Muslims in the name of cow protection or love jihad is the new norm in the largest democracy of the world.

Let’s be blunt – India is under the reign of a Hindu extremist government. For the first time in independent India’s history, you have a government which is openly repugnant to the idea of secularism, pluralism and liberalism.

What is happening in India today is not normal. The systematic targeting of Muslims in the name of cow protection or love jihad is the new norm in the largest democracy of the world. This is not happening at one place but all across the country, particularly in the states rules by Prime Minister Narendra Modi’s Bharatiya Janata Party (BJP).

Last week, the news came from a village in Jharkhand, an eastern Indian state, that a Muslim youth was victim to Hindu radicals because of his love for a Hindu girl. The villagers tied the boy to a tree and then beat him to death. In Uttar Pradesh (UP), Chief Minister Yogi Adityanath’s private army, Yuva Vahini, a ransack group of Hindu fanatic youths, are working with renewed vigour to target the interfaith couple.

In Rajasthan, a Muslim man was beaten to death because he was transporting cows. The Hindu vigilante group that attacked the man did not bother to know the purpose of the transportation, they just segregated five Muslim men from the group, leaving behind their Hindu accomplice, and thrashed all of them black and blue. One elderly man lost his life in the hospital.

Poor Muslim families are suffering in UP because of the closure of the slaughter house. The new local government run by a Hindu fanatic argues that they were illegal. If illegality was the parameter then why are so many other shops – sweet shops, grocery outlets and others mostly run by Hindus – allowed to run?

Independent India has a Muslim minority which constitutes around 14% of India’s population and the largest Muslim population in the world, yet it still faces this kind of systematic marginalisation.

The sad part is the silence of the ruling elite. Modi will comment on the attack on Christians in Egypt but maintain a very eerie silence on the killing of Muslims in his own backyard. In fact, his minister, Nirmala Sitharaman justifies the campaign of cow protection by saying that this was part of the freedom movement.

In West Bengal, Rashtriya Swayamsevak Sangh (RSS), the patron of BJP, paraded the Hindu youth carrying weapons on the day of Ramnavami, a very sacred festival for Hindus, last week. They would march through Muslim dominated areas to provoke them and polarise the community, which has been living for centuries together.

There is religious violence in the Bhadrak district of Orissa, a reasonably peaceful state not known for Hindu-Muslim clashes. The BJP registered a significant victory in the local elections recently. Emboldened by the win, the party is trying hard to make its presence felt loud and clear and win next year’s regional election. They are resorting to polarising tactics to expand their base in the state, where they have been at the margin for long.

The plan is simple – turn India into a laboratory of Hindu fundamentalism and majoritarianism. They have already done it to some extent.

Historically, India countered the Two-Nation theory and always believed that both Hindu and Muslims can coexist together. But the way the BJP and its patrons are behaving today, in a way it justifies Partition in the name of religion. It is hell bent on proving Mohammad Ali Jinnah right that Hindu and Muslims constitute of two nations.

The nation-building project India launched after independence involved religious integration. There was a conscious attempt by the government and civil society groups to heal the wounds of the Partition and build a strong secular nation. This was the idea of India.

But the BJP today wants to aggravate the wound and destabilise the nation-building process.

The campaign in the name of cow protection, love jihad, undermining Islamic history, promoting the Hindu way of life are all aimed at creating a majoritarian India, where religious minorities are relegated to second class citizens.

Modi’s talk of development is just a political ruse to appeal to the larger middle class but the agenda is quite different. In the last three years, the government has not done anything extraordinary at the economic front. Except political hyperbole and big words, aimed at grabbing headlines, there is nothing Modi can show to the people as the great achievement. There is no new economic vision. They are, in fact, implementing some of the core economic projects of the previous Congress government, which they used to oppose as an opposition party.

No wonder it suits the political interest of Modi to keep the nation engaged in the name of divisive issues, such as cow protection and all. The media and the masses are animated about the issue and they debate endlessly about it. This serves the larger purpose of communalising the Hindu educated middle class who get swayed by such divisive issues. And Modi gets away without being questioned about his economic development.

Indeed, there is a method in the madness which the ruling party and its fanatic elements are indulging into. The BJP does not believe in unity in diversity but divisiveness in diversity.