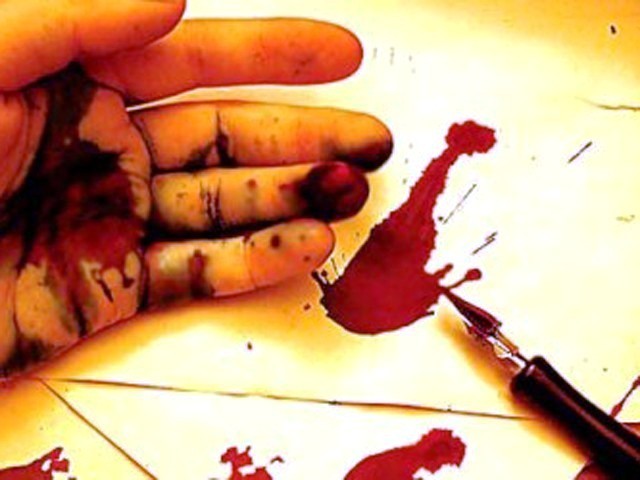 The dangers of journalism aren’t just confined to the threat from extremists.

I love writing, and I love writing for a cause. But the events of the past year have left me and my classmates rattled and disillusioned. I was never under the impression that journalism was a glamorous or a safe career. But the situation in Pakistan has grown so volatile that extremists have the courage to murder ministers. Salmaan Taseer and Shahbaz Bhatti were both powerful men; they were men with influential friends and personal security guards and despite that, they were killed in broad daylight.

What chance would an ordinary journalist have, when chances are that people don’t even notice a byline?

Our job starts when you hide

For an ordinary civilian, the current state of affairs is bad enough; for a journalist, it’s even worse. Civilians can stay holed up in their homes and will probably be safe. But journalists don’t just get to hear the gun shots; they are right there, hunkering down and trying to stay alive. There’s nothing glamorous about that.

Pakistan topped the list of the Committee to Protect Journalists as being the deadliest country to work in last year with good reason. Be it in Swat, or Islamabad, or good old Karachi, the fact that you’re a journalist is reason enough for any gun-toting trigger-happy freak to play God with your life.

The frightening reality of life in the field

Last year, my journalism teacher invited the respected senior journalist and secretary general of the PFUJ Mazhar Abbas to my class for a guest speaker session. He talked about how he’d switch routes on his way to work, or leave home for work at different times, how every journalist should carry a first-aid kit and know basic first aid so you know how to at least stop the bleeding from a bullet wound.

As he told us about how some people had once gotten into his home and threatened his family, causing his maid to miscarry her child, I realised with a feeling of dread that this was what I would face as well.

A passion that proves deadly

The dangers of journalism aren’t just confined to the threat from extremists and other parties one writes against. The six people that died in Karachi on Thursday night are just nameless statistics to us, as are all the innocents that lose their violence in sectarian and target killings. Not a day goes by in Karachi when something violent does not happen, and when it does, the journalists covering such stories are again placed at greater risk.

Is it any wonder then, that a prospective career in journalism has been the cause of far too many fights between me and my parents? It’s easy to make sweeping statements like,

“I’ve made my peace with it, and I’m willing to be the change or die trying”.

What isn’t easy is that your loved ones accept this fact as well. I’m lucky to have a family that encourages me to be brave and speak up for all the good in the world, as Wali Khan Babar’s family probably did. But they lost their son when he was not even 30.

I think more than the journalist, his family is braver for understanding the risks he might take in the future, and letting him continue on this path anyway.

So why, you might ask, am I pursuing journalism? Why am I picking a profession that I am genuinely afraid of pursuing? Because the alternative is not doing something.

I’m too fond of this country to just stand back and give up. So all I can do is try, in the midst of all this terrifying violence that surrounds us is write on and hope I have done my best.