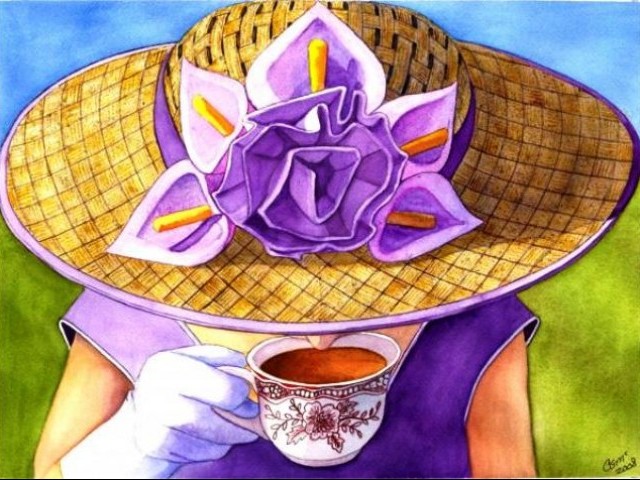 The regular coffee-sipping-juvenile-bride makes the most spectacular social case study for curious people like me.

So, I am vacationing in Karachi after a nightmare of a semester. A newlywed school friend called me up to ask if I’ll join in for a little coffee-table chatter at one of the dear little coffee-shops, with a bunch of dear little female acquaintances.

The thought of a social detour which involves mingling with rich married girls my own age practically paralysed me. I protested, but the married friend seemed to have acquired newfound levels of determination. As I began to pity her husband, she arrived at my doorstep to bundle me in her car and whisk me off.

An hour later, I was sitting amidst the wives of either bureaucrats or sons of textile mill owners. I was introduced to Mrs Gul Ahmed Textile, Mrs Afroze Textile and Mrs Sitara Textile who are university drop-outs aged 19, 20 and 21 respectively.

My school-buddy’s father owns a metal industry, has prominent place in provincial politics, has just one daughter and an utterly outlandish sense of bringing her up.

She tied the knot with a 23-year-old university graduate who likes to watch football and flatter his wife while daddy makes big bucks at a big-shot confectionary firm.

Anyways, let’s put family details aside. So there I was, sitting diffidently, amidst the lovely new brides as the only single member of the party and sipping away at the Julius Caeser Cappuccino, or the George Washington Latte that had been lovingly ordered for me.

I felt shy and out-of-place as I realised that I was not just underdressed and ‘under made-up’, but also had no knowledge of the latest bangle designs at XYZ gold jewelers that happens to be the subject of a heated discussion just then.

When a chiffon-clad, sapphire-studded lady from the party solicited my opinion, I tried to hold back the great aversion for gold jewelry and the street crimes that it encourages.

The ladies then began to analyse the latest furniture sale at Chen One.

“Why would anyone purchase a marble centre-table worth Rs7,000?” I wondered.

However, I nodded, smiled and agreed with the general flow of the discussion. I stifled the overpowering urge to say that centre-tables are the most superfluous pieces of furniture. They get in people’s way and are certainly not worth a bill of Rs7,000.

I wanted to tell the ladies that a centre- table of much better quality, and of a much cheaper-price, can be bought from the roadside shops along the streets of Bohri Bazaar in Saddar. But the ladies would probably have never even heard of Bohri Bazaar, let alone shop there.

The progeny of a regular coffee-sipping-juvenile-bride makes the most spectacular social case study for curious people like me.

While the pretty young mamma buys expensive gold jewelry and center-tables, the kids are busy memorising Shakespeare and Homer under the watchful eye of a British tutor at school.

They will read the Illiad and resolutely ignore Bang-e-Dara throughout their life.

These people may remain alien to the simple pleasures of roadside chaat and paani puri because Mamma does not allow them to venture near a plebian lifestyle. They will somehow mature physically on processed chicken and cheap wine.

They will grow up relating tales of how their great, great grandpapa was honoured by Lord Mountbatten for his fidelity in the Indian Civil Service.

You should nod, smile and try to look impressed.