Why Pakistanis are happier than Indians 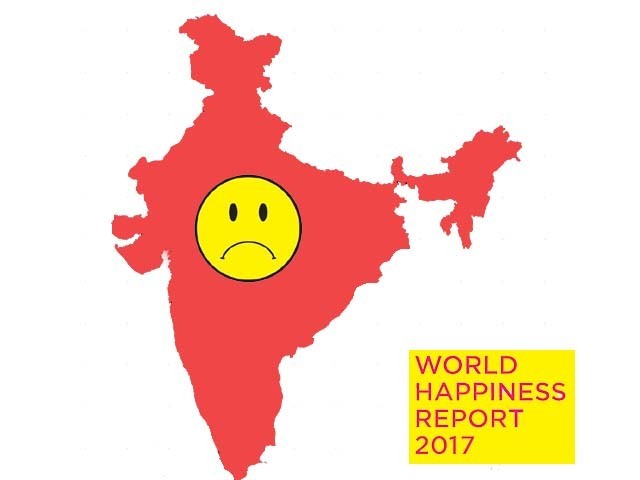 Another possible reason for unhappiness in India could be due to the lack of employment opportunities, especially for the youth.

The World Happiness Report, released by the United Nations on March 20, 2017 – to coincide with International Happiness day – has ranked India at the bottom of the pyramid, in terms of happiness of its citizens. India has been ranked 122 out of 145 countries, even below Sri Lanka, Bangladesh, Bhutan, Nepal and Pakistan.

These findings are based on evaluating the responses to a structured questionnaire sent to around 3,000 respondents who were asked to rate their happiness on a scale of zero to 10, where zero represents the worst possible life and 10 the best.

The questionnaire covers six key variables like Gross Domestic Product (GDP), life expectancy, social support (measured by having someone to count on in times of trouble), trust (measured by a perceived absence of corruption in government and business), perceived freedom to make life decisions, and generosity (measured by recent donations).

For a country with a population greater than 1.2 billion, the sample size of 3,000 is not representative enough to evaluate the state of happiness of its citizens. Moreover, all the key variables are objective in nature, which may have different meanings and understandings as per the particular cultural milieu of each country.

Another shortcoming of the survey is that all the six key variables relate to ‘life satisfaction’ which has different meanings from that of ‘happiness’.  Happiness is subjective and is defined as a state of well-being and contentment. In other words, one can be perfectly happy with what one possesses. On the other hand, a wealthy billionaire can be unhappy with his or her life. Happiness is, therefore, a state of mind and is not conditioned with material possession.

However, in spite of the shortcomings, we have lately seen that measuring the economic growth, solely based on GDP is not a sufficient indication of determining the well-being of people. Three back to back surveys that were recently released by some of the world’s renowned international groups have raised serious questions about India’s performance in several social indicators.

India has been ranked 97 out of 118 developing countries by the International Food Policy Research Institute’s Global Hunger Index 2016 (GHI), highlighting the seriousness of the prevailing hunger situation in India. In terms of health care, the United Nations General Assembly in its publication, ‘Measuring the health-related Sustainable Development Goals in 188 countries: A baseline analysis of the Global Burden of Disease Study 2015’, has ranked India 143 out of the 188 countries covered in the survey. India’s achievement in health care has been found to be dismal.

The Social Progressive Index 2016  has ranked India 98 out of 143 countries and has placed it under the category of ‘Low Social Progress,’ while China has been ranked 84 and placed under the category of ‘Low Middle-class Progress’. The study considered various indicators like basic human needs (nutrition, water, sanitation, shelter and personal safety), the foundation of well-being (access to basic knowledge, access to information and communication, health and wellness, environmental quality) and opportunity (personal rights, personal freedom and choice, tolerance and inclusion, access to advanced education) for determining the ranking of individual countries.

One of the reasons why China has shown improvement in social indices is because it invests heavily in education, healthcare and housing. Today, some of the schools and colleges in China are among the best in the world.

India and other South Asian countries can learn from the Scandinavian countries which have recognised that investment in healthcare, housing and education, coupled with growing GDP, will translate into the happiness of its citizens. These countries have a strong support system that addresses the individual needs of its citizens; from free healthcare programs and free education to unemployment insurance. The government also ensures the right work-life balance that doesn’t put an unnecessary pressure on spouses. Both husbands and wives take turns by adjusting their work schedule to raise their children. Another interesting feature is that these Nordic countries don’t believe in the ‘hire and fire’ policy.

One of the probable reasons why India is at the bottom of the happiness index could be due to the growing inequality in society. The economic benefits of GDP have not reached many sections of India. People in the agricultural sector are affected the most as they depend on the monsoons. With consecutive failures of the monsoon in some of the states, farmers were forced to take loans from cooperative banks and other private sources and. Many of them lost their livelihood when they realised they were unable to pay off their loans.

Another possible reason for unhappiness in India could be due to the lack of employment opportunities, especially for the youth. Most of the foreign companies which have set up businesses in India are capital intensive. This has not helped solve the growing unemployment problem. For example, last year, only 1.5 lakh jobs were created against the requirement of 10 million jobs. According to estimates, the actual job creation in 2016-17 may further decrease. This presents a very disturbing and scary scenario. As the average age of Indians is below 35, thus the growing unemployment situation may lead to social unrest. The government needs to act immediately to set up labour intensive industries. Unlike the Scandinavian countries, there is no unemployment insurance available for the jobless youth of the country.

The government of India should learn from the Australian model, where the well-being of citizens is tracked along with the GDP. Findings after findings have questioned the GDP as a true metric for measuring the progress of a country. True progress can only be measured by taking other human development indexes, such as education and health, under consideration as they too are important factors in measuring the well-being of its people. Thus, the GDP alone is not a sufficient determinant to track economic progress.

Mere emphasis upon ‘growth’ at the cost of social progress will only promote inequality in the Indian society. The policy makers should give serious thought to improving the social indices by investing heavily in social.

The present investment of around 1.14% of the GDP needs to be doubled if India has any hope of matching the progress made by China, Japan, South Korea and Singapore. India should not rest on its laurels by solely relying on one metric – ‘GDP’.

Ultimately, the Indian Prime Minister Narendra Modi’s leadership will only be evaluated once he is able to bring a qualitative difference to the lives of Indians who have been deprived of the benefits of education, healthcare and housing. Otherwise, his vision of making India a superpower will remain a pipe dream.