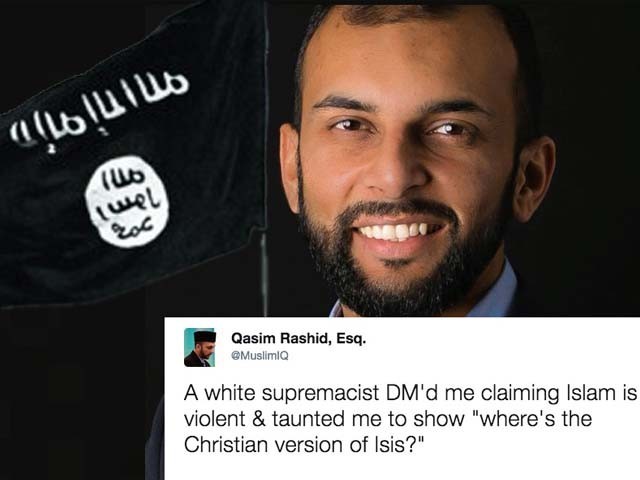 Qasim Rashid, an American Muslim and lawyer whose activism revolves around changing perceptions towards Muslims in the West, went viral on Sunday.

Post 9/11, fuelled by misinformation and simplistic analysis, Islamophobia has spread like wildfire in the western world. Especially now, with Donald Trump leading the most powerful country in the world, racists and xenophobes of all stripes have become bolder in the wake of an unmistaken rise in hate crimes against minorities.

In times of crises, caricatures of minorities serve as a useful tool for the general unthinking populace as it provides a convenient scapegoat to slaughter by projecting all of a nation’s problems to these untamed immigrant savages. This phenomenon is not unique to a particular country against a particular community. Nay, we need to look no further than our own conception and treatment of Afghan refugees in Pakistan.

Qasim Rashid, a Pakistani American and lawyer whose activism revolves around changing perceptions towards Muslims in the West, went viral on Sunday for a tweet he made in response to a white supremacist.

A white supremacist DM'd me claiming Islam is violent & taunted me to show "where's the Christian version of Isis?"

This was my response. pic.twitter.com/YgvbrTjzCi

-George Bush’s invocation of God for the invasion of Iraq

According to Rashid, in previous exchanges, the man had claimed that racism didn’t exist, hate crimes were false flags by people of colour, and that neither the Nazis nor the Ku Klux Klan (KKK) were real. Judging by that, the tweet might not have changed his perspective, but it has been shared more than 73,000 times at the time of writing and many people, including Christians, have praised him for fighting bigotry with facts. Rashid went on to say that while he missed several atrocities like “Irish Republican Army (IRA) terrorism, Srebrenica genocide, Central America imperialism,” he hopes his point was made.

That point is: Terrorism – Has – No – Religion.

As a Muslim I know those atrocities done by Christians are the anti-thesis of Christ.

When speaking of religion, it is important to realise that no religion is immune from being used as a front for violence, regardless of how peaceful it may be. Take for example, the treatment of Rohingya Muslims in Myanmar at the hands of Buddhists. Rather, what is important to realise is that violence has been the way of the world since time-immemorial. Perhaps we are just a violent species.

Every war that has been fought has been a war for resources, and it is no different today. The key consideration for the political leadership is how to justify and mobilise the working classes by duping them with an ‘us versus them’ narrative. Historically, religion and politics were intertwined and considering that religion played a huge part in the identity of people, it was the perfect medium to exploit. But with the enlightenment period resulting in a fall in the appeal of religion in the West, that void was filled by nationalism, which is the ideology secular nations now evoke when attacking other states. The violence has not gone away because of a fall in the appeal of religion; it has just reshaped itself and aligned itself to a different ideology.

This is a very crucial point to understand if we are to have a nuanced understanding of the role of ideologies in justifying violence for the sake of resources. It is too simplistic to say that Islam is uniquely violent because of present circumstances and ignore a century of political and economic subjugation of Muslim-majority states. That of course does not in any way excuse jihadism, but it surely gives perspective on how things got so bad.

Rashid’s response should not be construed as an attack on Christianity or apologism of the Islamic State (IS). Rather, it emphasises the point that every religion has its dark history. As he says, the goal of IS is to create a separation between Muslims and the West, to try to create a division. When we have policies that give the perception of advancing that division, it becomes fodder for IS to say, “See, we told you they hate you. Come to us”.