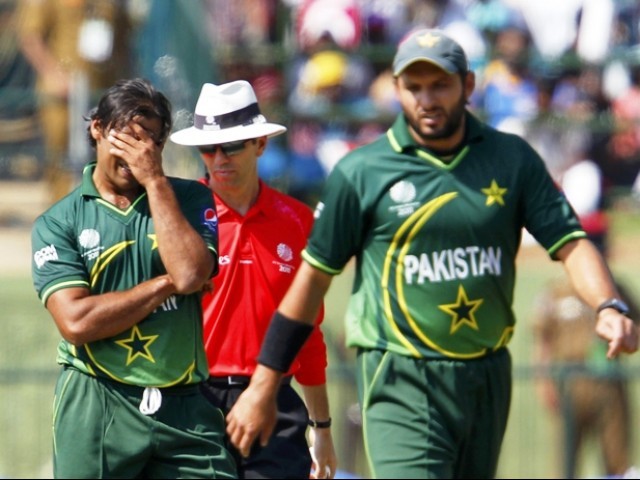 In Sri Lanka, the locals warn all tourists to be aware of the oncoming traffic.

Despite various road markings and signs, overtaking at will on even the narrowest of single lanes is a common sight. For that reason alone, you need to be on guard at all times, be wary of even the innocuous Tuk Tuks (rickshaws) and sit prepared for a sudden manoeuvre.

It seems as though the welcoming committee failed to inform Pakistan cricket team of these trends on the streets. The rigidness of their plans oozing from their on-field show, the refusal to budge from what was discussed in the team meetings and the lack of flexibility they carry in their minds – and acts – has made for a questioning performance in the middle.

Going into every World Cup match with just three specialist bowlers, stacking the playing-eleven with batsmen and all-rounders with hopes of winning the toss has been Pakistan’s strategy.

Shahid Afridi opened with Shoaib Akhtar and Abdul Rehman on an untested Pallekele surface against New Zealand and gave the spinner five overs straight. Rehman was in defensive mode, not giving the ball much flight and not enticing the batsmen to add to the spinner’s tally. So while the spinner, and Pakistan, failed with the early tactics, Afridi persisted with the faltering plan, not realising that Abdul Razzaq would now need to bowl in the middle overs as well as at the death. As things unfolded and Ross Taylor rose to the occasion, Razzaq’s lack of pace, movement and conviction left Pakistan searching for answers, and a specialist bowler.

To add to their woes, Kamran Akmal played a helping hand. The immovable entity chose to disappoint his captain, his team and the fans by another horror show behind the stumps which left the steaming Akhtar realise what Danish Kaneria used to go through in every Test. Akmal survived the bans, the fixers, the Integrity Committee, injuries, Zulqarnain Haider’s defiant knock, and even his brother’s brief challenge for the wicket-keeper’s slot but riding high on Pakistan’s reluctance to bury the demons and start afresh, he came out to bat and disappointed yet again.

The batting order, too, needed a change given the openers’ failure and the job on hand but, unlike all that happens in Pakistan cricket, hopes were pinned on the senior stalwarts and Umar Akmal, Afridi and Razzaq came in with Pakistan reeling, needing to perform but with not much batting to follow. Waqar Younis insisted, given the shambles that was the chase, that Pakistan needed more batsmen than an extra bowler. Rehman has been chosen over Saeed Ajmal because the left-armer provides a better batting option but two wickets from four matches hardly deserves a slot in the playing-eleven.

It seems Pakistan’s hopes rest on the flip of the coin instead of their own performance: win the toss, bat first, pray the batting clicks and let pressure bring the desired result, not the bowling. The thought process must now change.

Sports editor of The Express Tribune who is also the author of the book "Champions, again" farasghani.com/championsagain.html

Dearth of international action in Pakistan is killing our sports writers

Adnan Akmal: Chirping away towards success

The outrageous cricket that Pakistan played