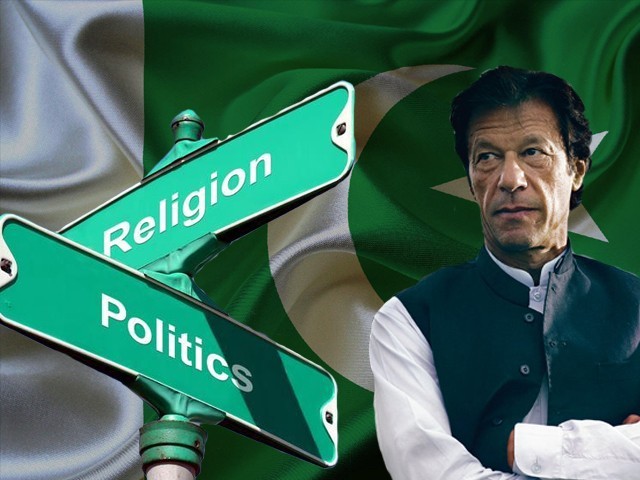 The party has done nothing but compound the ideological issues.

Recently, I had the opportunity to witness a panel discussion where the firebrand conservative MNA from Pakistan Tehreek-e-Insaf (PTI), Ali Muhammad Khan, delivered his, and for that matter his party’s, “vision” for Pakistan. According to him, Pakistan should be a theocratic state and seculars should either mend their ways or leave Pakistan. Moreover, he also brought in the havoc of the Partition riots, arguing that all the sacrifices were actually for the creation of an Islamic country.

PTI's MNA @Ali_MuhammadPTI calls secular people a threat to Pakistan and asks them to mend their ways or leave the country pic.twitter.com/R2tezc7QoV

Unfortunately, his rant was in front of a religious minority member of Pakistan Muslim League-Nawaz (PML-N), Dr Ramesh Kumar Vankwani, which only amplified its negative message.

There are several points which I need to make after listening to his rather tortuous rant.

Firstly, I think it clearly confirms that his party is a reactionary political outfit which does not want to see a progressive Pakistan. Although both PML-N and PTI are conservative, there is a difference which often eludes many political commentators who tend to ideologically lump them together. PML-N, particularly after 2008, is no longer an ideologically conservative party. It has actually moved to the centre while still retaining economic conservatism. In fact, in recent times, some of the most progressive legislations have come from PML-N, including the Women Protection Bill and the Hindu Marriage Bill. Nawaz Sharif, despite representing a conservative constituency, has reached out to religious minorities such as Hindus and Ahmadis. Furthermore, in a recent landmark speech during a Holi ceremony, Nawaz took a bold step by criticising religious extremists and declaring that Pakistan was not created for Muslim supremacy but for ensuring that no religion would dominate another. This has led to condemnation from some religious elements as well as conservative ideologists, and the PTI MNA’s tirade against the premier and secularism can also be understood in that context.

Whatever its murky past may be, PML-N on the whole has shown progression on key issues. Now this may not mean much to PTI’s impressionable and  abusive troll brigade who are singularly obsessed with Panama leaks, but in Pakistan’s context, where for many decades we have regressed ideologically, these steps constitute a course correction and therefore are extremely important. Yes, PML-N is not as liberal as Pakistan Peoples Party (PPP) – a party that I support and which in Pakistan’s context remains relatively the most liberal – and therefore there will always be a limit to what it can do, but there is no doubt that it has progressed.

PTI, on the other hand, has constantly confirmed that it is an ideologically regressive party. Its leader Imran Khan, who unfortunately commands a cult like following, has in the past courted hardliners and has come up with an apologetic defence for them. PTI’s alliance with Jamaat-e-Islami (JI), easily the most reactionary political outfit in the country, bears testimony to its own ideological bent as well. Moreover, the alliance between the two in Khyber-Pakhtunkhwa (K-P) is not merely pragmatic, but also ideological as evidenced by curriculum changes in the textbooks. PTI also strongly opposed the Women’s Protection Bill, tabled in the Punjab Assembly.  In addition, PTI has constantly whipped up hyper nationalism based upon mistrust and fear of the outside world. This latest rant by the PTI MNA does nothing to improve PTI’s standing and merely reinforces the fears that Pakistan would regress if PTI comes into power.

Secondly, it is pretty clear that neither Muhammad Khan nor his party are well-versed in history. To say that Jinnah’s vision was of a theocratic Pakistan is simply not true as Pakistan’s demand was primarily for protection of Muslims’ economic and political interests. It was because of that very reason that Jinnah had also agreed to the Cabinet Mission plan of 1946 which had envisioned a confederation (a confederation is not a theological state) where Muslim interests would be safeguarded. Yes, Jinnah did think Hindus and Muslims were separate nations, but the creation of a theocratic state was not his vision.  Even Bharatiya Janata Party (BJP) leaders like Lal Kishan Advani,and Jaswant Singh have acknowledged that Jinnah was a secularist.

In other words, Pakistan was supposed to be a country for protecting Muslims. In fact, Jinnah laid his vision clear in his landmark speech on August 11, 1947 when he declared,

Unfortunately, after his death, the Pakistani leadership started to take the theocratic route by passing the Objective Resolution, but it was not what Jinnah had envisioned.

Thirdly, Muhammad Khan implicitly painted seculars as some kind of enemies of Islam and Pakistan. In our discourse, secularism has unfortunately become amalgamated with atheism which has made any reasonable debate on it impossible. Secularism is not atheism or anti-religion. There is a difference between secularism and secularisation, where the former is the separation of religion from statecraft and the latter is a process whereby religion loses its significance from the society. A secular state does not essentially mean a secularised society.

Secularism vision of separation of religion from statecraft is essential in a religiously diversified society. It should be remembered that although more than 95% of Pakistan’s population is Muslim, substantial sectarian differences, based on different interpretations, exist between them. Implementing religious laws would require, privileging of one interpretation over the other, which would further enhance rifts.  A secular state by being neutral ensures harmony between various sects and also tackles orthodoxy in the legal code by delinking religion and legislation.

Unfortunately, Muhammed Khan’s emotional tirade is another effort to obfuscate the issue and create misunderstandings about secularism.

When PTI had emerged as a strong potential electoral force in 2011, there was hope that it would uphold progressive principles. Supported by the extremely influential educated white collar class of Pakistan, the party was in a position to correct the trajectory. However, unfortunately, the party has done nothing but compound the ideological issues. It is on the wrong side of history, and I sincerely hope that it is defeated soundly in 2018 elections.