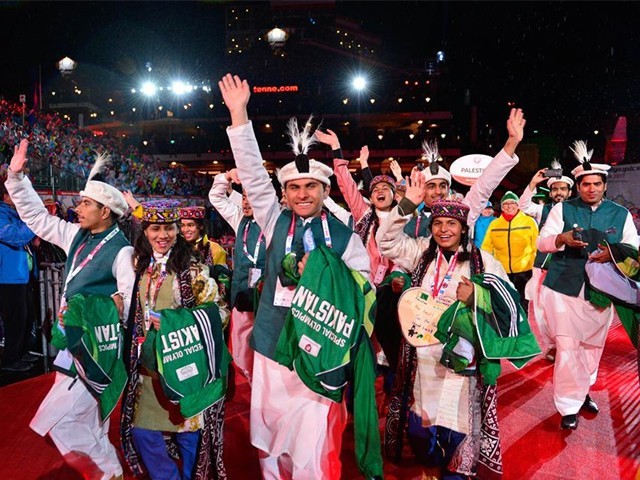 Pakistani athletes gave an incredible performance given the environment and infrastructure available in the country for winter sports. PHOTO: FACEBOOK

Recently, Pakistani athletes bagged an impressive total of 16 medals (three gold, seven silver and six bronze medals) at the Special Olympics World Winter Games in Austria. These games provide a great platform for athletes with disabilities to showcase their talents on a global stage. The games were initiated in 1977 and have been held every four years since then. The recently concluded event in Austria was the 11th edition.

However, this was only the second time that Pakistani athletes participated in this competition. The Pakistani contingent comprised of 12 athletes: Huzaifa Qazi, Muhammad Hamza Aslam, Hameezuddin, Usama Aziz, Muhammad Abdullah, Pervez Ahmad, Sabahat, Fatima Amir, Farah Ehsan, Mehwish Tufail, Rimsha Naeem, and Tehmeena. Eight of them participated in the snowshoeing competition, while four of them competed in cross-country skiing events. All the three gold medals were won in the snowshoeing competitions: Qazi won the 200-metre snowshoeing race, Sabahat won the 100-metre snowshoeing, and the Pakistani girls’ team won the 4×100-metre relay race. Amir and Ahmad were the other notable individual winners, as they both won two silver medals.

Pakistani athletes gave an incredible performance given the environment and infrastructure available in the country for winter sports. Pakistan definitely does not have favourable weather conditions for winter sports, as snowfall only takes place in a few places within the country and that too for a short duration. Even in places that do witness snowfall, there is a lack of ski resorts as well as state-of-the-art winter sports facilities thus athletes cannot train.

One of these rare facilities is available in Naltar, where athletes spent a year training for the games in Austria. In addition, sports federations in Pakistan (especially those associated with winter sports) are generally starved for finances. Thus, they cannot afford quality coaches and foreign training trips for the athletes.

A possible explanation can be that the Nordic countries, the US and Canada (which are the traditional powerhouses in winter sports) do not invest the same amount of resources in preparation for the Special Olympic Games as they do for the Olympics or the Paralympics. Hence, the level of competition is not as intense in the Special Olympics, thus making it relatively easier for Pakistani athletes to win medals.

Of course, this should in no shape or form discredit the achievements of these athletes as they have faced countless hurdles to reach this level of success. In general, there is a stigma attached to people with mental and physical disabilities within our society. Hence, these achievements would not have been possible without the athletes’ passion and hard work as winning laurels for the country while struggling with daily hurdles is a big deal.

They truly deserve our appreciation and acknowledgement for being ambassadors of Pakistan. The society in general, specifically the government and the media, should highlight this breakthrough moment in Pakistan’s history.

Perhaps this will help change the mind-set that is so deeply rooted in our society and change the way people view those with disabilities. Till today, only a handful of initiatives have been taken up, mainly in the form of cash rewards, but we need to do more. These athletes must become household names.