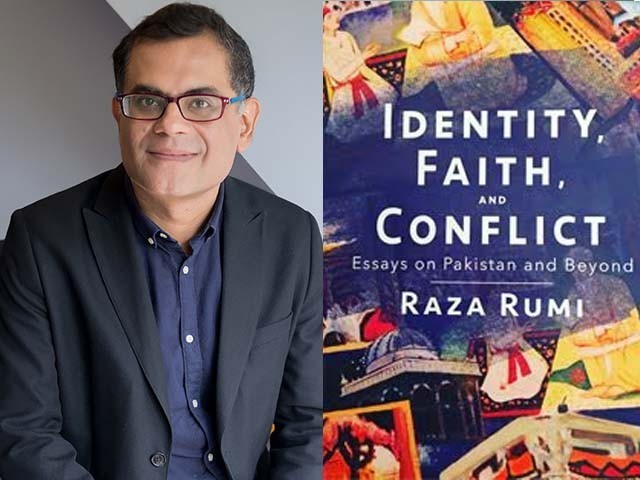 “We are witnessing a revolution in our lifetime,” said Rumi.

I arrived in the United States a few weeks ago and the first public event I attended was a bit too familiar. In 2013, I went to the launch of Raza Rumi’s book ‘Delhi by Heart’ at the Khayal Festival in Lahore. Four years later, I was in Queens Museum, New York where Rumi’s new book titled ‘Identity, Faith and Conflict: Essays on Pakistan and beyond’ was released.

The book is a collection of essays that Rumi has authored over the past few years. It was strange to see that the introduction described Rumi as an “international scholar in residence at Ithaca College”. I know Rumi from the days of Twitter and blogging. He then had not joined Capital TV as an anchor and was considered a Twitter celebrity in those days. I met him after nearly three years as he left Pakistan in 2014.

The introduction to ‘Identity, Faith and Conflict’ is written by Barbara Adams, who is also the editor of the book and an associate professor of writing at the Ithaca College. She writes,

“In these essays, Raza examines what it means to be a Muslim in Pakistan today”.

As a Pakistani Ahmadi, I can relate to the struggles to define myself in ‘a contradictory and volatile society where zealotry turns to discrimination, exclusion and even murder’. Rumi’s essays highlight the problems of identity and religious conflict in Pakistan and South Asia.

The book includes a long essay on Ahmadi rights, and Rumi calls them ‘half-citizens’. There is another long piece on the rise of sectarianism. There are two essays on Muslim-ness and the prospects for reformation with Muslim societies. In the final section, there are shorter pieces on Rumi’s experience of exile and where does one ‘belong’.

Dr Ayesha Siddiqa and Beena Sarwar, who need no introduction, spoke at the occasion. Dr Siddiqa expressed her views on the book and the current situation of Pakistan. True to her style, Dr Siddiqa was quite blunt and straightforward in her views. She praised Rumi’s efforts but took issue with the idea of ‘Jinnah’s Pakistan’ as he had outlined in the book. Dr Siddiqa said this was a contested claim. She further said after years of social engineering ,

“Islam has just come to Pakistan”.

There is context to this claim. Sufi tradition – which was mostly responsible for the conversions of locals in India to Islam – is not rigorous and rigid at practicing the Sharia. The interpretations are also more flexible and concentrate on the inner selves of the people. Dr Siddiqa pointed out the puritan wave of religion that has taken over various forms of the Sunni Islam.

She said unfortunately all the leaders, liberal or conservative, democratic or totalitarian have contributed to this situation. She rightly noted the absence of dialogue between the varying interpretations of Islam which are starkly in contradiction with each other. There can’t be a dialogue between the person performing a dhamaal in a Sufi shrine and the suicide bomber who comes to blow up the shrine.

“This is the Pakistan we live in, with complicated challenges our new generation has to face,” said Dr Siddiqa.

Beena Sarwar, renowned journalist and activist, mentioned the similarities of the patterns of hate speech used to alienate communities both in the United States and Pakistan. Sarwar said that declaring communities as ‘other’ and creating fear mongering was the tool used by the state in Pakistan and the Donald Trump administration was following such steps. Such policies tear apart the social fabric of the society and force communities to further ghettoise themselves. Sarwar, however, was optimistic towards the Pakistani society as more and more liberal voices were defying the extremist narratives and presenting alternative views.

Rumi in his remarks said,

“If Jinnah were to come back to Karachi with a suit and a cigar in his hand and a drink in his other hand, he would surely be lynched or called an infidel”.

Today, the Muslim sects that Jinnah belonged to, the Ismailis and the Shias are targeted and many have been killed in the past. Rumi reminisced the inclusive past of the country when all kind of people used to coexist and despite tensions found a way to live with each other. Even in Pakistan the rise of intolerance over the decades was the ultimate tragedy.

“Look at what we have become,” he exclaimed.

He said we cannot have a country which has a standardised vision and one uniform view of life. Barring people from their right to disagree, whether it is in idea or practice is opposite to the concept of a pluralistic society. Rumi also expressed his concerns on the way different opinions are being shut down in Pakistan. From the recent abductions of liberal bloggers to the hounding of liberal voices in journalism and intelligentsia, the Pakistani state and its institutions are restricting spaces for dissent and disagreement.

The book launch took place the day after Sehwan Sharif had been attacked and most Pakistanis were perturbed by the incident. One member from the audience, a young Pakistani-American asked the speakers to highlight what was positive in today’s Pakistan. Sarwar highlighted the resistance to bigotry by many citizens. Rumi emphasised upon women’s education and how more and more women were joining the workforce.

“We are witnessing a revolution in our lifetime,” said Rumi.

Dr Siddiqa was more cautious and said that the fundamentals had to change in the country before we could conclude on a positive note.

Late Mushtaq Gazdar’s famed documentary which was banned in 1980s was shown after the event. The film and its bold themes evoked heated discussion.

“Pakistan’s intelligentsia was far more daring in those days than what they have become now,” a young woman told me after the event.

Artist and founder of Pakistan-American Arts Council Mumtaz Hussain organised this event and managed to line up interesting speakers and a wide ranging audience that included some Americans. Those present included BBC journalist Anwar Sen Roy, poet and columnist Hasan Mujtaba, Dr Tahira Naqvi, an author and a professor at New York University and Bob Dietz from the Committee to Protect Journalists.

The author is an online content producer who is currently working as co-editor with Humsub Online and Pak Tea House Blog. He tweets @Omaidus