Why didn’t the FBI disclose the Trump-Putin investigation pre-election? 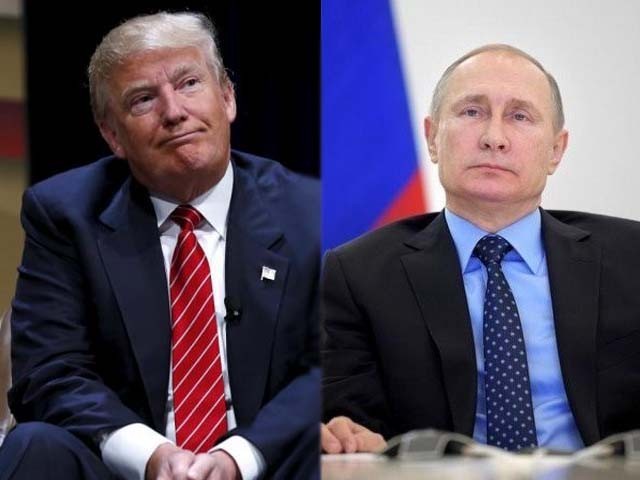 The bottom line is that if Trump was indeed helped by Russia in winning the election, it makes Trump the playmate of our archenemy.

While my heart goes out to the latest victims of the continuing global mass carnage, here in Washington, the cat is officially out of the bag! With an emphatic ‘yes’ (to Russian hacking) and a firm ‘no’ (to Barack Obama ordering Donald Trump’s wiretapping), FBI Director James Comey sealed the deal of what could turn out to be the most controversial presidency in US history.

This is not a left-wing conspiracy against Trump. This is not even the fulsome fake news. This is all really real. On March 20th, the FBI director testified in the Congress that Trump has been under investigation for a possible collusion with the Russians who might have helped him steal the 2016 Presidential Elections.

We’ve been scratching our heads in wonderment as to why Trump is so obsessed with the Russian leader, Vladimir Putin. Much to the chagrin of Americans, he’s showered an abundance of praise on the former Komitet Gosudarstvennoy Bezopasnosti (KGB) boss and has portrayed him as a great leader in addition to appointing a secretary of state who apparently has close links with the Kremlin.

It turns out that it was not just Mike Flynn but many others surrounding Trump – the Manaforts, the Stones, the Carters and their mothers – who used Russian crutches to influence the outcome of what can be deemed as a remarkable election upset.

But we live in the world of alternative facts where the master diversionist Trump tweets and teases public sentiment much to the delight of his poorly educated followers. Even at the time when Comey was testifying, Trump was busy presenting a far from reality narrative.

Comey is a fascinating character. He has gone off the rails in the past and has left people bewildered, especially his publicly coming out just days before the November election and announcing that the FBI was probing into leading candidate Hilary Clinton’s contentious emails. The disclosure plummeted Clinton fortunes, and even though Comey gave her a clean bill of health later on, the damage had already been done.

Is Comey a man of principles? Is he after something that we are not aware of? Is he simply sincere to the mission he’s been assigned to i.e. holding the bad guys accountable? Is he with evil Trump? After all, this so-called investigation can turn out to be in Trump’s favour and hence wash away all doubts and vindicate his position for all time to come.

Or, is Comey the messiah this highly polarised, beleaguered nation is desperately waiting for? Being a ‘JC’ himself, he could be the one who’ll bring light and put to shame Trump’s backdoor dealings with the Russians and maybe, just maybe, knock him down and out of office.

However, there is a problem that makes one leery of Comey’s intentions – while he did announce that the FBI was looking into Clinton’s emails a minute before the presidential election, why in the world did he not disclose the agency’s efforts in regards to the Trump investigation? Now we find out that it has been on-going since July 2016? Why did he sit on the information for so long and why did he break just Clinton’s and not Trump’s news as well?

Why did it have to be at an all-powering congressional testimony that Comey decided to disclose that Trump is under investigation? Why not pre-election, several months ago? Did Comey want Trump to win as well? What changed? Was it moral pressure or was he simply going through the motions of a full-fledged inquiry to eventually exonerate Trump at the end? Can we trust Comey in an already schizophrenic environment?

Too many questions but no easy answers.

One should also, however, be careful in terms of overestimating Comey’s influence. Even if the investigation his agency (and some others) is conducting proves beyond doubt that Russia was indeed behind Trump’s success, we need someone like Ken Starr to go after Trump. An independent counsel and not much else can analyse and facilitate action against the president and serve the cause of justice.

Although he’s still in ‘campaign mode’, Trump is now the president and hence enjoys immunity on a number of counts. Yes, the FBI might give a jolt or two to his credibility, but time has proven that Trump is a shameless character and therefore credibility is not an issue that he cares about.

With a mere 37% approval rating and a guaranteed four-year tenure of office, Trump will continue to toy around with the country’s fortunes, without sincere vision or wisdom to back up his insane and inhumane acts and omissions. Being someone who rides a high horse, Trump, a Roy Cohn prodigy, will carry on with his incessant diatribe.

Regardless of Trump’s ultimate fate, nations decline because their leadership lets them down. What we are experiencing in today’s America is nothing less than a freaky, blatant violation of trust and possibly a conscious effort to bring the hardworking, law abiding citizenry that prides itself with relying on its structures, immigrants and democracy down to its knees.

Trump is out to make a mockery of everything American. We are no longer the leader of the free world and Trump is okay with that.

Did we deserve Trump as our president? Will Trump strike the final blow to destroy and dismember America? Obviously our enemies are relishing every moment of this freak show. By colluding with an adversary like Russia and by playing into the hands of extremist, terrorist elements, Trump is not helping America. People are disappointed and disillusioned like no other time in our history.

Uncertainty and continuous banter is consuming Washington. Every day is laced with drama and frilled with sensation. Trump’s tarnished past, his problem with truth and his big mouth are a national security threat that Americans can ill-afford in these troubled times.

Even if we give Comey’s intentions the benefit of doubt, he cannot single-handedly bring about Trump’s downfall. It has to be a concerted effort of the system, the people, the media, the legislative, the judicial arms of the government, and more than anything else, the 17 intelligence agencies (including the FBI) that are tasked to safeguard us, the people of the United States of America. It is their job to hold Trump accountable.

“It (Russia influencing elections) threatens what is America. And if any Americans are a part of that effort, it’s a very serious matter.”

Whereas, “Putin hated Secretary Clinton so much that the flip side of that coin was that he had a clear preference for the person running against the person he hated so much”.

The bottom line is that if Trump was indeed helped by Russia in winning the election, it makes Trump the playmate of our archenemy.

Is there the smell of treason in the air? I guess we’ll have to wait and see. In the meantime, we will continue to live in interesting times.