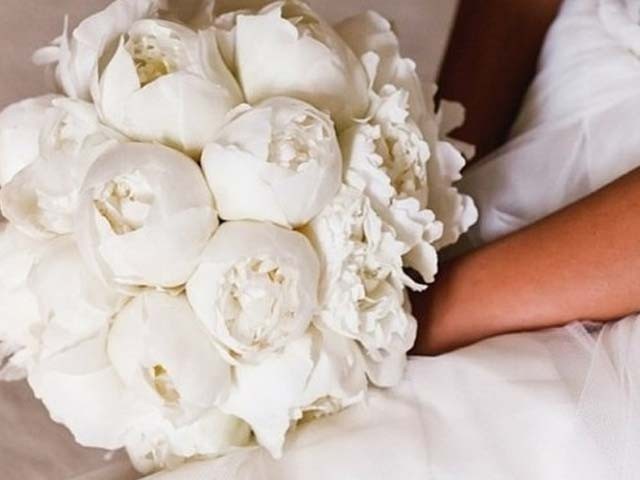 “What will you wear?” she asked. She had found the shadow of a tree and sat gracefully on its soil while I towered over her. PHOTO: PINTEREST.

“My dress is going to be whiter than that cloud,” she said to me while we walked down the path in the park.

The sky was clear except for a few cotton-sized clouds congregating above us. She pointed at them as she spoke,

“It’s going to have this braid that flows down my gown and a net on my back. You’ll like that won’t you?”

The sun was playing a mischievous game of hide and seek with the clouds as I tried to envision the gown in my head.

“You really want that braid?” I asked.

“Yes!” she exclaimed and let go of my hand as she twirled on the grass.

“It’s going to fall over my shoulders and my bridesmaids will have the same colour dresses as the braid!”

I chuckled. It sounded perfect.

“You’ll look beautiful,” I said and she stopped in her tracks.

A soft smile tickled her cheeks.

The priest checked his watch impatiently and around the corner, she walked in with her father. Everybody stood and witnessed her as she stopped at the door and her father took a breath in. The people gushed in awe. She was mesmerising. Her gown was white as the clouds and her braid fell gently on her shoulders. A veil shadowed her face and her eyes lit up under it.

Her smile was wide and sweet and her cheeks were rosy as she stood soaking up the praise. Her father, the proudest man in the room stood straight as an arrow. His tuxedo was sharp, and under his almost opaque spectacles, a tear formed like a diamond under the earth.

I was standing as well and I could not believe that I saw her before my eyes. Her presence was illuminating in an already bright afternoon, and her glow charmed us all.

She scanned the room and her eyes locked with mine for a second. I smiled and she missed it.

“What will you wear?” she asked. She had found the shadow of a tree and sat gracefully on its soil while I towered over her.

“It will match your braid,” I said.

I looked down and saw my hands clenched tighter than they’d ever clenched before. A bead of sweat formed on my temple when I unclenched to straighten up my bow tie. It was sky blue, just like her braid.

I scratched my head. I had only been to a few weddings in my life and most of them were outdoors under a tent. Only my brother’s wedding was held in a church and I was too young to remember how it went.

“A church will do,” I said. “Although I’d prefer the outdoors.”

The clouds had left the sky now and the sun beat on the grass warmly but graciously.

She thought about a countryside wedding, below the hillside near a lake. The canopy would be made of bright and colourful flowers, the type that fills your whole vision. The walk down the aisle would be on flower petals and leaves. Her eyes packed with the idea of this magnificent wedding.

“The outdoors! I want it outdoors!” she leapt into my arms.

She was soft and the wind was cool and all was perfect around me.

The wedding was in a church and a colourful pattern of rainbows fell on the floor while she stood at the church’s door with her father. A distraught Jesus hung on a crucifix above the door where they were standing.

Both her and her father stood below the tortured statue with pride. Their eyes gleaming and their face glowing; they waited for the organ to sound before they made their way down the aisle.

I stood staring at her; my eyes would not dare look at anything else for she was the most beautiful thing I had ever seen.

She let go and gave a little peck on my cheek before falling back onto the ground. She sat with grace, her legs folded and her arms in her lap as she looked at me with her future in her eyes.

It was a long time. Years and lots of them.

“Time flies with you,” she said. “It seems like I’ve known you forever.”

“I wish I had known you forever,” I said.

“I wish you had come and spoken to me earlier”.

“Our classes were different!” I protested.

“You were just a scared-y cat,” she said.

She always brushed off my excuses. I sat next to her and our knees touched and our eyes met before she rested her head on my shoulder.

“Tell me more about our wedding,” she said.

I thought about it. It seemed too far away and my mind would not wander that far. But I still reached for it in my head.

“What song would you walk down the aisle to?” I asked.

She thought about it.

“Iris?” she suggested. I shook my head.

We went back and forth for a while until she started to frown. I hated that.

“How about… Can’t Help Falling In Love?”

She turned her head and looked at me, her lips in a curl. She kissed my nose and rested her head back on my shoulders.

The organ player played a C chord and held the notes for what seemed like forever. It wasn’t until they began walking that the organ player shifted chords. A, C then a G then an A-minor. I knew because I played the keys for a band in college for a few years. I hummed under my breath and so did the rest of the guests.

“Wise men say…” I whispered. “Only fools rush in.”

My eyes were glued to her as she walked down the aisle. It was like seeing your first child take her first steps, the joy was no different.

“For I can’t help, falling in love with you”.

“Where will we go after?” she asked.

I thought about it a while. The only quiet thing I thought of now was the library, where I told my mother I would be. Instead, I strolled the park with her and I knew it was the right thing to do.

I felt her smile on my shoulder. In front of us were two ducks waddling on the grass, soaking the sun. The second one followed the first around until the first one flew away. The other stayed behind grazing the grass. The wind picked up.

“I wonder what vows we’ll make,” she pondered. “How honest will they be?”

I shifted in my place and the cool soil bulged in the place where my heels sunk.

“Do you want to practice them now?” I joked.

She chuckled. She wrapped her fingers in mine and began speaking.

“I vow to keep you happy and content, through thick and thin, through high and low. For I know no other love like yours, and nothing else will come close to what you make me feel. I vow to keep this fire burning through the coldest of nights, and keep it ablaze through the most scorch of days”.

She looked at me as she recited her rehearsed verses. She hummed the wedding song and smiled.

She walked in a single file line, with her hand wrapped around her father’s. She was like a celebrity walking down the red carpet, accepting her praise and flaunting her beauty. Every eye locked on her; her smile and her eyes that gleamed in the afternoon. Her father was her king guarding her with love and affection.

I stood patiently as she walked towards me. My eyes watered and wiped themselves. Such an astonishing angel she was, dressed in white and that braid over her shoulder. Lilacs, tulips and daffodils were all wrapped in a summer bunch that squeezed in her hands while her gown swayed gently from side to side. She took small steps and the organ music complimented each gesture.

Finally she saw me and our eyes met. Her cheeks tickled a smile like they did that summer afternoon so many years ago and her eyes lit up like never before. I could feel a pulse in my vein double and my heart beat faster. The blood pumped quicker and my breaths grew heavier. I managed to smile back, a weak one in the process and she looked away. She was inches away from me. I could smell her sweet perfume.

Then she walked past me.

I saw her gait quicken as she reached the altar. Her groom waited for her patiently. His bow tie was black and his suit was not a tuxedo. He didn’t seem to enjoy the Elvis classic either because he winced at every chord change. But he stood proud and ready to be her husband, and that was enough for that day.

We all sat on our seats and the processions started. I clocked out immediately. For once, I realised that not paying attention would be the wiser thing to do. I thought about it all, the reasons and the incidents that led me here and her on that altar with someone else. They all seemed futile and regret seemed unnecessary. Life flows in a smooth serene quietness. It’s only when we’ve missed our chances, that our choices seem wrong.

I paid attention only during the vows. I remembered hers like a vague silhouette of a distant dream. These were different. There were no promises of contentment and no fires to keep burning. The vows were mature and doable, not outrageous claims that could not be made.

With our fingers intertwined, she hummed a soft melody of a tune I had never heard before. Maybe she made it up as she sat there, or maybe it was a song I had yet to hear but it made me feel warm in my heart. The sun’s shine was a different ray of light, and it felt like just for a second that all the illumination in the world came from the being beside me.

When she had stopped, my eyes were closed and my head rested on the trunk of the hard wooden tree. In my head I was seeing myself from outside my body, like a ghost creeping on. I could not believe I was there, and she was there with me. I could not believe that for the first time, I was free of all the care in the world and that I lay liberated under the shadow of an oak tree and beside me a girl that I just planned to share a future with. I was young and I was free.

She tickled my cheek and my eyes slowly opened. All I saw was her.

“I love you too,” I confessed.