Does Imran Khan stand a chance in the 2018 General Elections? 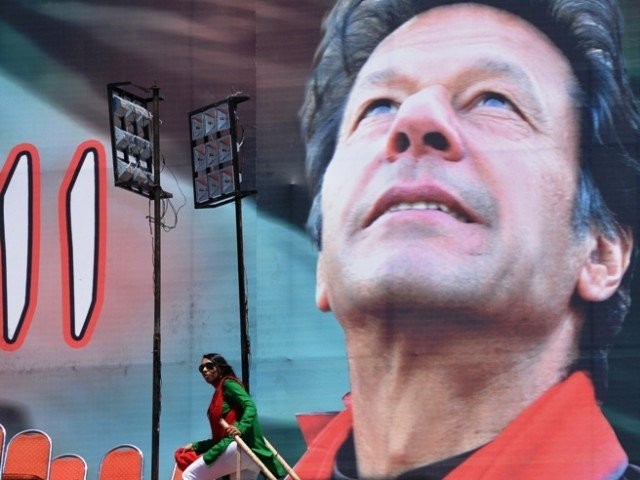 Supporters of Pakistani politician and former cricketer Imran Khan stand next to electoral poster of Khan at the venue of an election campaign meeting by Khan's party Pakistan Tehreek-e-Insaf (PTI) in Islamabad on May 9, 2013. PHOTO: AFP

The Nolan brothers are a great team; they have teamed up for some impressive films such as The Dark Night Trilogy, producing ground-breaking action cinema. What intrigues me even more is that some of the lessons from their films are also applicable in the factual world. When Bane cornered Batman in The Dark Knight Rises, beating him to a pulp, he uttered the movie’s famous lines,

“Peace has cost you your strength, victory has defeated you…”

A tired and peaceful Batman had won his victory and thus gave up the struggle that made him who he was.

There are some parallels that can be drawn here between Batman and Imran Khan. I am not saying that the latter is Pakistan’s ‘Dark Knight’ but rather that he stood up for justice in his own unique way, making the nation believe again, similar to what Batman did for Gotham City. Of course, Bruce Wayne and Imran are rich and have a way with the ladies and yet remain painfully single. However, this is as far as this similitude goes.

Imran’s Pakistan Tehreek-e-Insaf (PTI) was formed way back in 1996 but had little success during its early years. It took him years of hard work to actually win a seat in the National Assembly and was at the point of being considered a political failure. However, through his years of campaigning and some new found “friends”, Imran held sway in the 2013 General Elections by winning the second highest number of votes by any political party. At this point in his political career, Imran had won the hearts and minds of the Pakistani nation. Considered an outsider in politics, he had made his way to the highest echelons, playing the majority in Khyber-Pakhtunkhwa (K-P) and the opposition at the centre. With political heavy weights such as Shah Mahmood Qureshi and Javed Hashmi by his side, Imran looked unassailable.

From this apparent pinnacle of political pizzazz, PTI’s fortunes started going downhill. Apparently, nobody informed Imran that winning the election is half the battle. Every party must perform once in power in order to win the following elections, which are always tougher than the first. Like every politician, Imran unfortunately went back on his word in quite a few facets of his announced political strategies.

His first apparent blunder was to downplay the youth candidates when extending party tickets. The youth had responded passionately to Imran’s call for justice and thus alienating them once they were all geared up to move forward and help build the country, was seen as utter betrayal. The second, and perhaps the worst, mistake that Imran could make was to trust the system to help him get a positive decision on the Election Commission Pakistan (ECP) contested seats cases that he had filed after the elections.

Furthermore, the dharna did give the nation something to focus on for a while, and perhaps Imran had thought that some of his “friends” might help him topple the government, but it was not meant to be. His concentration on absorbing more power or removing the Sharif government (which are practically synonyms) allowed for the resurgence of terrorism in K-P.

Despite what Imran’s partisans may think, he was directly responsible for what transpired as the worst terrorist attack in Pakistan’s history – the Army Public School (APS) massacre. His quest to retake power in the centre, albeit on solid ground, led to the negligence of the province, which his party was governing. The aftermath of the APS tragedy branded Imran as more of a rabble-rouser than an activist for justice. If he couldn’t deliver being in power in K-P, what was his excuse for blaming the Sharifs for their blatant shortcomings.

However, it was the end of an era for PTI, when Javed Hashmi contracted differences with Imran and left the party. Victory had defeated Imran.

Given the circumstances, Imran’s PTI has a tough election ahead of them. The urban areas within Sindh and Punjab, where they had garnered a considerable following, will be harder to penetrate again. PTI put up a good show in Karachi, which was only won by the Muttahida Qaumi Movement (MQM) through its infamous ‘extracurricular activities’. This time round, however, it seems harder for PTI to win the same amount of support, simply because Karachiites are tired of his troublemaking persona. They also have Pak Sarzameen Pakistan (PSP) to look forward to. It wouldn’t be a surprise if the Lahoris also follow suit.

What must be mentioned here is that since we are discussing Pakistan, legacy or inexplicable loyalty votes – the kind Pakistan Peoples Party (PPP) ends up receiving each election – are a political reality. Therefore, even if Imran hasn’t performed too well so far, he may still be receiving considerable amount of votes in the next election. I hate to say this but it would probably be a good time for Imran to play the ‘Pakhtun card’ in K-P. He is going to win a number of return seats, thanks to the political stalwarts he has in his party.

Despite what the media might say about the Panamagate case and Imran’s role in the whole affair, the people of this country actually need solutions to their issues rather than hollow government bashing Imran is infamous for. Imran is a fighter for good and justice, albeit a fallible and fractured one. He actually needs to put his fights to rest and get to work on delivering in the places where he already has control. Unless he can pull off a miracle in K-P till the next elections, he will definitely give the PPP a chance for a comeback – and believe me, nobody wants that to happen.