The untold story of the water that Sindh drinks 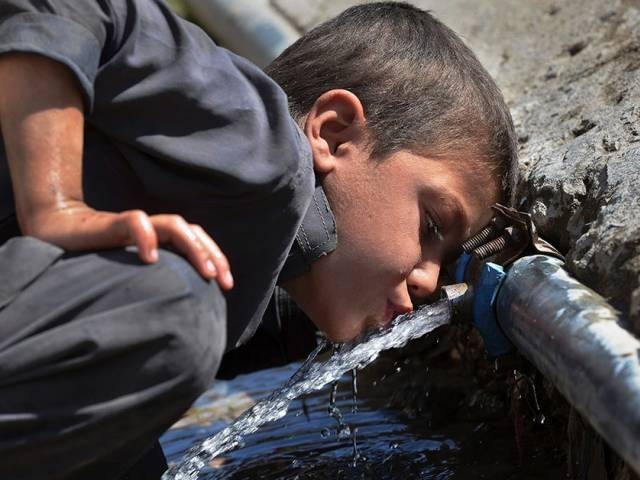 It is a wonder of God’s miracles and human endurance that the tens of thousands of people who drink this everyday still live. PHOTO: AFP.

It is a hot, dusty day. You grab a glass from your kitchen shelf, walk over to the mineral water dispenser, and pour clear and fresh water into it. The coolness satiates your thirst quickly and you leave it on the table partially full, in a hurry to continue the day’s chores.

There is one reality lost in this mundane action: The water you wasted in one minute, some could stretch for one entire day.

Not very far away in fact, there are people like you and I who satiate their thirst with water that is slightly better than sewage water. The water they drink is not clear, and it most definitely is not fresh. The most fundamental human right, to have clean drinking water and sanitation (as per the United Nations Resolution) is being denied to millions of people in our province.

Recently, after the Supreme Court took notice, Justice Kalhoro of the Sindh High Court, headed a commission to order the Pakistan Council of Research in Water Resources (PCWR) to investigate the government’s failure to provide clean water for its citizens.

Water samples were taken from all over Sindh and the results were depressing. Karachi, Hyderabad, Sukkur, Badin, Thatta, the list goes on: the water was contaminated, polluted, and unsafe for human consumption. It is a wonder of God’s miracles and human endurance that the tens of thousands of people who drink this everyday still live.

The sources of this water lie as murky reservoirs; saturated and coated with a fluorescent green carpet. Debris of meals and floating cans marking the corners; this is what your rural and urban Sindhi gives to his or her children to drink and bathe in.

This is disgusting, outrageous, a massive violation of human rights, and a gross example of neglect. Except, it is not an example of neglect at all. There is something far more sinister and nefarious here than mere apathy.

Since much has been said and heard about the inhuman scarcity and pollution of Karachi’s and other urban centres’ water supply recently, I find it equally important to shed some light on the gravity of the water situation in rural Sindh.

Sindh receives her share of water from Punjab, via the Great Indus. It is then distributed through three main barrages; Guddu, Sukkur and Kotri. The Kotri Barrage is what brings Karachi water via Thatta on the right bank and Badin on the left.

Now ideally, the barrages should have water equally distributed amongst them. However, because of massive agricultural landholdings owned by very influential bigwigs, it is the Sukkur Barrage with 44,000 cusecs water that gets the lion’s share of it. The Guddu Barrage comes in second with 34,000 cusecs water, and by the time Kotri Barrage gets its turn, it’s left with 2,600 cusecs of water, which is further illegally redirected to people of authority.

Because the Kotri Barrage has insufficient supplies of water, the noble Irrigation Department and Sindh Irrigation and Drainage Authority (SIDA) have unlawfully substituted its depleting water levels with water from the Manchar Lake.

Manchar Lake is about 18 kilometres from Sehwan Sharif and is the largest freshwater lake in Pakistan, also one of Asia’s largest. Apart from its service in supporting human life, it has been an ecosystem within itself; sustaining marine life for villages, and a breeding ground for hundreds of different species of birds.

Manchar Lake’s water level has drastically depleted, as has its environs. Its water, in recent studies shows high levels of arsenic, symptomatic of the industrial waste dumped within. No fish swim within now; some species of birds are near extinction, evocative of a cruel imitation of the Dead Sea.

Badin district, which is on the tail-end of rural Sindh, has one border to the sea and is hugely affected by the water catastrophe, not only because its children have been drinking polluted water every day, but because the effects bleed into the lands that sustain entire villages. Today, the Left Bank Outfall Drain (LBOD) laced in industrial effluents is what is irrigating the kitchens and homes of thousands of Badin families, causing illnesses like Hepatitis, cancer, stomach parasites and skin disorders.

Due to insufficient fresh water, the sea has begun encroaching on land at the rate of seven acres a day in Badin and lower Thatta. The Sindh government’s politically appointed regulators and engineers, instead of averting the disaster, are frantically trying to redirect water where they please by adding pipes to flood canals like the Pir Wah branch. People are dying from dehydration and disease every day, their cries are falling on deaf ears.

Zareena lives in the village of Seerani with her five small children and extended family. While they are poor, she prides herself in keeping her home and children clean and well-maintained. Now, however, that is becoming increasingly difficult. Not only due to the massive dearth of water, but because Seerani is a coastal area, the water they have been boring for generations has become briny with seawater. The sea’s intrusion into land has affected the water Zareena’s entire family drinks. She laments that the salty water makes her children constantly thirsty and never satiated. Unbeknownst to her, her children are at severe risk of hypernatremia – saltwater poisoning.

How will this story end? This is Armageddon, and no one seems to know or care. There is no political will to act to subvert this disaster. There is no pause in the corruption, no guilty conscience in the rape of natural resources. Is it so difficult for the Sindh government to fathom, that eventually we all drink from the same well? For today’s short-term gains, we are pillaging the land we must leave for our generations to come.

Despite Riparian Water Rights, which are state allocations of water rights for those possessing land along its path, and Pakistan’s commitment to international water laws, the federal and provincial government show no sign of rectifying this degenerating situation.

In the meantime, we must value each drop of clean water we drink; each shower we take and each plant we water. While we must be mindful of never taking even basic rights like clean water for granted, our leaders have shown us that we must also remain ever insecure.

“The wars of the 21st will be fought on water”.

Clearly, it has begun.