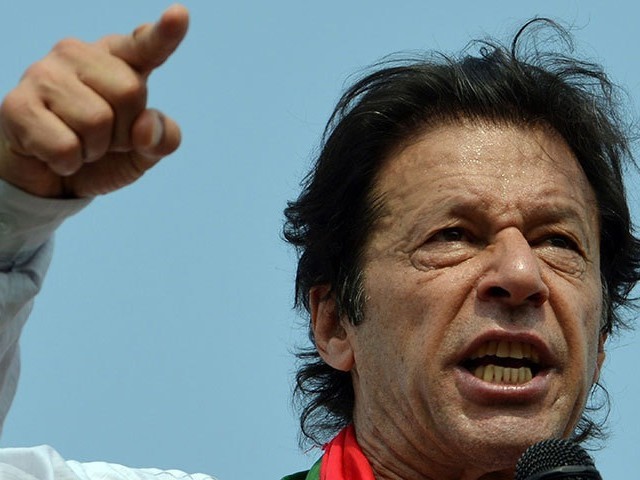 A clip of Imran Khan blasting the government for holding the PSL final in Lahore has gone viral, where he mocks them for attracting “phateechar” players. PHOTO: AFP

Prejudice has flown through Pakistani society across generations. We have held open biases against ethnicities that aren’t our own, against women, against religious minorities, against those of a different sexual orientation, and of course, against people with darker skin tones. The latter is especially common, even today. For example, our film, advertising, and modelling industry features very few artists who don’t have light skin. In fact, there is so much pressure in Pakistan that skin whitening creams are advertised and sold to reinforce every other stupid potential mother-in-law’s view that their son, regardless of his skin tone, should marry a girl with a fairer complexion.

These indefensibly grotesque views, thankfully, are evolving for the better with each passing generation. At the age of 36, I meet Pakistanis close to my age or younger who reject these warped inclinations, as evident from the choices they happily make in their lives.

But certainly, most of us have had to fight these views in some manner growing up. Yes, we all have at least one cousin, uncle, aunt, parent or grandparent who still carries casual or openly aggressive prejudice. Because our generation has had to combat these views so consistently for decades from numerous quarters, we have understandably grown sensitive to the issue.

Recently, a clip of Imran Khan blasting the government for holding the Pakistan Super League (PSL) final in Lahore in light of recent terrorist activities has gone viral, where he mocks them for attracting “phateechar” (low-class) players instead of top-flight talent.

In particular, there is an unsavoury portion where he says,

Now, before someone accuses me of being biased in favour of Imran, I have been one of his toughest critics on these columns, yet even I was wondering if the country had gone mad when the liberal population began labelling him a racist.

After fearing that the government would score political points with the PSL final, Imran has certainly resorted to bargain-bin tactics. By first beckoning his supporters to chant anti-Nawaz Sharif slogans and then praising them for doing so – a mindless move considering they were jeering the prime minister at a cricket match he made happen in the first place – Imran came across as childish.

What’s more, he comes across as classless in his old age where he is disrespectful and dismissive of international cricketers who risked their lives to play in Pakistan. It’s a serious case of sour grapes, and Imran has lost political capital because he appears to lack statesmanship.

Charging someone with racism is a very serious accusation, and we seem to be so sensitive to the matter that we have automatically assumed that Imran is racist because he correctly mentions that some of the replacement players were brought from Africa. Perhaps the racism is in our heads.

I was particularly dismayed when I read a blog titled ‘Why is Imran Khan so racist?’ – it jumps from conjecture to conjecture, building an entire case on the shaky foundation of the author’s own speculation. To be fair to the author, who usually writes well, Imran was labelled a racist by other publications and media houses as well as several numerous journalists across social media in Pakistan.

I was in agreement with what the author said in the blog until he said:

“He has no political enmity with the foreign players. There is nothing to gain by berating them – not judging them for the content of their character but by the colour of their skin. Martin Lurther King Jr would be turning in his grave.

According to Imran’s logic, a player does not qualify to be foreign if he is darker than Imran. The Punjab government has shown that racial profiling is not beneath them and the PML-N ministers have often targeted certain ethnicites, associating their ethnicity with their terrorism.”

Without evidence, it’s a huge assumption to say that Imran was flippant about these players due to their skin colour. At no point does Imran mention that he is dismissive of African players for their skin. As anyone who watches cricket knows, even today most African cricketers are white. In fact, in context of his statement, he is dismissive of players for being phateechar. We can’t just fill in the gaps with such serious allegations or it makes us no better than the crime we believe is being committed. Soon after, the author offers an incomplete translation of Imran’s words, which you can compare to the translation I’ve offered above that offers more context:

“I don’t know any of these foreign players, I have not even heard their names – the government seems to have grabbed someone from Africa and said look it is a foreign player”.

Now compare this to the translation presented by me:

Furthermore, the author goes on to say,

“From a purely semantic point of view, Africa does qualify as being foreign for Pakistan but in Imran’s colonised mind only the white overlord would qualify as foreign. Ironically the only player from Africa was Sean Ervine from Zimbabwe, who is white.”

First of all, the author is incorrect again. Two out of the three replacement players are from Africa, Sean Ervine and Morne van Wyk, not one. And when Imran mentions players from Africa, it seems more plausible that he is talking about the players chosen to replace three who refused to come. And two of those are from Africa.

“Chris Jordan plays for England – a country Imran would know well as he visits often and bows his head to our British colonial overlords. Maybe Imran should have looked up his name before assuming every black person is from Africa.

At a time when the entire country was showing their gratitude to the entire West Indian contingent, particularly Darren Sammy, the megalomania filled mind of Imran was just looking at how dark their skin colour was and dismissing them as phateechar. A two time T20 world cup winning captain is a phateechar player because he looks like he is from Africa in Imran’s world.

When you are ready to compromise on your fundamental sense of decency and humanity just to gain the least bit of political capital and hope for support by appealing the lowest common denominator in all of us then you know that you have truly lost all sense of your ideals.”

Here, basing on his assumption that Imran was targeting skin colours and not the player’s star value, the author takes some more serious swipes at the Pakistan Tehreek-e-Insaf chief. Again, the author just assumes that when Imran mentioned players from Africa, he was just talking about black players and not the majority of the replacement players in the PSL final, who actually are from Africa.

What’s more, does the author realise that Imran played cricket at a time where the majority of African players he played against, from Zimbabwe or South Africa, were white? So how can the author assume that Imran suddenly believes all African cricketers are black? And if Imran was indeed being racist here, then why did he mention Chris Gayle’s name later as being someone he would have liked to have seen at the PSL final?

It seems that when Imran mentioned players from the world’s biggest continent, he was most likely talking about Sean Ervine and Morne van Wyke, two white African players, but the author inferred he was talking about players like Darren Sammy, because Sammy is black. The author took Imran’s disdain for what he distastefully termed as phateechar players, and assumed that disdain was for skin colour as well.

So who is the real racist?

While the liberals of Pakistan have been so trigger-happy in labelling Imran a racist based on flimsy evidence, how would they have reacted if a conservative had labelled a person a blasphemer based on similarly marginal evidence? It just goes to show that both liberals and conservatives can go on witch-hunts.