Trump’s past, just like the Baku hotel deal, will keep haunting him 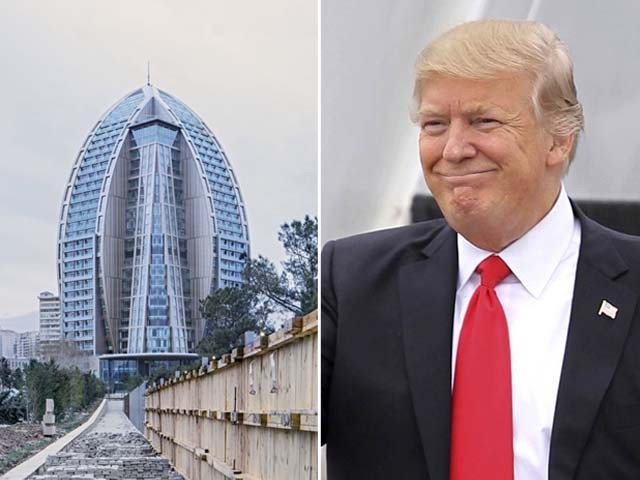 The Trump organisation denies a whole-hearted involvement in the Trump International Hotel and Tower Baku deal.

Donald Trump has taken the US by storm; given a whole new meaning to the word ‘lie’; upped the deceit and trickery standards, raised the immorality bar, trashed government institutions and functionaries and consistently put to shame the entire country that he’s supposedly the leader of. Thus, it is hardly a matter of surprise when the press comes out with a news story or a scandal that involves him or his associates.

To be honest, the day I received an email alert from The New Yorker regarding Adam Davidson’s ‘Donald Trump’s Worst Deal’, I simply pushed the delete button and moved on with my day. You can well imagine how frustrated, more like exhausted, I am from these nasty tit bits that are now a parcel of the typical American news cycle. In essence, nothing surprises me anymore.

From Russia’s involvement in our presidential election to wiretapping claims; the bluntness and brashness of Trump himself; the lame surrender of the Republican Party to the virtual takeover of America by the first family that reminds one of the most notorious third world/developing countries (without naming names!) where populations are subjugated, squeezed under economic pressure, live in fear when presidential ordinances and executive order overpower constitutional systems. This is Trump’s America for you.

Granted Trump’s America or his convoluted image of the country does not envision or represent the real America, he nevertheless, for all intents and purposes, is the one who sets the tone and direction of the country. He is the chief navigator who up until now has waded through his dark and murky past, made it to the Oval Office and has done so far so good. Ironically while the so far so good guy mentioned in The Magnificent Seven was a risk unto himself, Trump can potentially run the entire country to the ground.

The New Yorker story has gained some traction. In fact, much to my liking, it’s been highlighted and discussed in other media outlets. Clearly, I was compelled to pay attention since this is about the Trump organisation dealing with one of the most notoriously corrupt regimes in the world, i.e. the brutes ruling over Azerbaijan.

And it doesn’t end here. There is an apparent involvement of the Iranian Revolutionary Guard in the scheme of things – a group that enjoys the support and patronage of the Ayatollahs. Mind you, Iran is a country that Trump is hell-bent on going to war against and is on record condemning the nuclear deal.

How does this all add up? According to Davidson’s story, the Trump organisation that now denies a whole-hearted involvement in the Trump International Hotel and Tower Baku deal, was in fact knee-deep into the matter and took care of the nitty gritty logistics like ordering furniture from Turkey and so on. They sent the president’s daughter, now a top White House advisor, Ivanka Trump, to review the progress in 2014. Ivanka proudly put her pictures on Instagram and hence provided living proof that it wasn’t just the lending of the Trump name in the deal. The Trumps were undoubtedly an inspiration behind the project.

Like any other scandalous activity, more than likely, this one may pass as well. However, if the current momentum carries on, there is a strong possibility that based on US laws (yes, remember those?!) the Trump organisation as well as Ivanka Trump may get in some kind of trouble. What might bite them in rear end is the Foreign Corrupt Practices Act of 1977 – a law that they clearly abused and blatantly violated.

Whereas I understand that the US is not necessarily or has never been the torchbearer of high moral values, still, it hasn’t been this precarious. Trump and his family have conflicts of interests wherever there’s civilisation on the face of God’s green earth. Look at how he bypassed Saudi Arabia and UAE from his travel ban. Ever wondered why? Well, he has personal business interests in those countries and henceforth despite their involvement in terrorism; those countries were not included in the list.

Trump’s shadiness is indisputable. He arm-twists the weak and flouts laws at will. The Baku episode is just another pathetic tale of Trump pushing his luck to unprecedented limits. Whereas I’m cautiously optimistic, with all else going on, one is sure the Azerbaijan story will die its own death.

With Americans so tied up and occupied in paying utility bills, car notes, housing rents and faced with rising healthcare costs and everything that effects their lives, no one has the time and opportunity for activism, come out on the streets to protest and check Trump’s vicious onslaught.

Moreover, in an era where nothing is off-limits and all bets are off, Trump’s presidency will only bring out more scandals and the worse in this nation of 300 million people. Being a disgrace to humanity, an unapologetic thug, and thrives amongst the thugs, folks like Mammadovs, the Keyumars and the Heydars are Trump’s everlasting allies and he counts on their thuggery.

This is as real as it gets. America is in an evil spin and Trump is thriving, for now. Have we reached a tipping point yet? I’m not sure because there is some good left and there are still some hopeless romantics, the dreamers and the idealists who are keeping an eye and are out to destroy Trump’s ‘snuggle team’.

I have faith that there’s someone somewhere within us who will rise up and burst the horrifying bubble we are breathing in. As Trump continues to recklessly destroy and polarise this country, his past, just like the Baku deal, will keep haunting him.

More importantly, he’s now realising that saying things confidently and making hollow promises cannot translate into practical steps. Trump might have taken America on a schizophrenic trip, he’ll soon understand that his personality disorder and psychotic tendencies will be eventually be checked by this nation’s powerful system and structure that we all trust and believe in. America may be sending out mixed messages for now but we’ll correct our course. We have no choice.