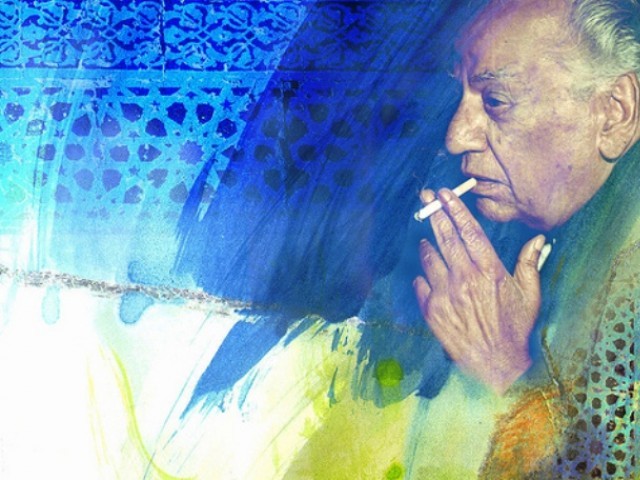 Having different Faiz days for different classes is unimaginable.

Lahore’s mall road was as crowded as always. Beyond the zooming vehicles and amongst the old silent trees, I saw him walking slowly on a footpath.

There was something dramatic about the old man’s appearance. He reminded me of realist Soviet paintings; ragged dusty clothes, long gray hair, wrinkled face and clutching a small piece of scarlet, a little red flag. He was heading towards the Alhamra Art Complex which was covered with life sized posters of the legendary socialist poet Faiz Ahmed Faiz.

The poet’s centenary celebrations were about to begin and the parking lot was almost full. The old man stood there for a short while and looked at the smiling photograph of the poet. He entered the main gate and headed towards the hall.

It was full of  ‘cultured’-looking men and women who walked in with a superior attitude. But while I saw all of those well-dressed, well-spoken people enter the old man kept standing outside. The guards would not let him enter.

He remained there until the gates were closed and the hall echoed with the familiar words of Faiz’ “Hum dekhaingey (We shall see).”

But the old man never saw anything!

When the audience left the  hall they chattered cheerfully. They sounded excited to have seen VIPs from Bollywood. I heard an elderly gentleman say:

“We’ll drink late into the night. It’s Faiz’s birthday after all!”

I saw the old man was still sitting on the stairs. “They asked me to buy a ticket to enter. I don’t have a thousand rupees,” said the poor working class admirer of the working class poet.

“I  came from Faisalabad to celebrate the 100th birthday of our beloved poet,” he added.

I found out his name was Rahmat, a power loom worker, who, like thousands of others, could not afford to enter that high society gathering dedicated to the proletarian poet Faiz.

A celebration of the man who fought against class distinction all his life was clearly divided into classes.

The next day an awami mela known as Faiz Peace Festival was supposed to be held at an open air theater of the Lawrence garden. This event is organised every year by the Progressive Writers Movement with the affiliation of left-wing organisations.

But this time, the Hashmis (Faiz’s family), who were the organisers of the elitist event mentioned above, decided to organise the Peace Festival as well.

It was open to all so it was attended by thousands of people, workers and activists, who are the true representatives of Faiz’s ideology.

With hundreds of red flags, Socialist slogans, working women and men, the ambiance was electric. The event opened with a couple of folk performances followed by performances by pop singers.

The people waited and waited, but there was no one to reflect the real essence of the poet. The intellectuals who had organised the event for the “poor ignorant masses” had catered it to what they felt they deserved – cheap comedy,  love songs and no mention at all of Faiz. No one at the Faiz Peace Festival could sing the songs that have been the anthems of resistance for decades.

Ironically, Faiz’s struggle was not just against the unequal distribution of wealth but also against the limitation of art. His poetry was the poetry of life and his words were the celebration of people’s struggle.

Faiz was a revolutionary who wrote about breaking down the walls of socio-economic disparity. But today he has been sold for Rs1,000 per person.

An independent filmmaker and political activist who teaches film theory at NCA. He blogs at ammar-aziz.blogspot.com and tweets at @ammar_aziz

Bonded to brick kilns: A song for revolution