Season six of Girls is a game changer. Here’s why. 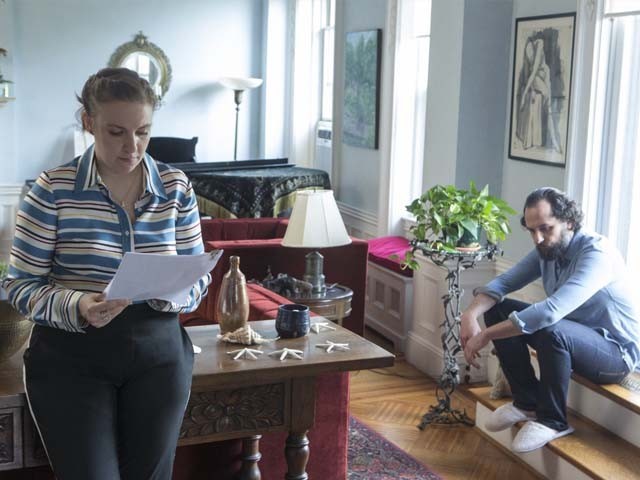 When Chuck Palmer (Matthew Rhys) says that girls come to him because they need stories and experiences to write about – I get that because we all need stories PHOTO: IMDb.

The first thing that struck me about season six of Girls was how it wasn’t about the girls anymore. The show was no longer about the undeniable bond between four girls that stood unwavering through time.

In the very first episode, Hannah (Lena Dunham) says to Paul-Louis (Riz Ahmed) – having him in the episode was enough for me to like it – that she only knew her friends by what they didn’t like. How odd is it to not know what your friends like? How odd is it to relish in that fact? She smirks as she says this and man, did that annoy me.

I think that spoke a lot about the selfishness that’s so deeply embedded into our generation. There’s another reference to it when Hannah tells Marnie (Allison Williams) that perhaps she didn’t notice her husband was addicted to drugs because she was too busy paying attention to herself. That’s the real problem isn’t it? Never listening, pretending to hear, and acting as if someone else’s stories are actually something you are invested in.

But why? Why are we no longer invested in others’ thoughts, and realities? Others’ pain? We are too immersed into our own pain. We are too busy. Too sad. Too exhausted. Just too done, aren’t we?

I recall thinking when the show began that this is going somewhere, even though all the girls were broken. So broken it felt real. But when are the girls going to grow up? Or is this is my future? Sitting in a random cafe writing about things that I don’t care about just to appease myself into believing that I am truly a writer. Is it even the art that matters any more or just the brand? Telling someone you are something to see their reaction as opposed to truly believing in it yourself.

I completely understand that Hannah’s character is supposed to be self-deprecating but to what point? Is it Dunham’s way of revealing our victimised natures? Is she trying to illustrate that this fragmented reality of the millennial that we try to capture so intricately through art doesn’t exist? Or did she just completely wipe out everything we know and thought was true?

I’m thinking back to season one, and how it captured a reality that felt right. It was so refreshing to finally see such menial life problems on-screen. Hannah was chasing after a guy who couldn’t even admit that he was in a relationship and she wanted to be a writer but she wasn’t really invested in her writing. She wanted to be the millennial girl but the one that surpasses what every other generation blames them for. She was selfish and she thrived upon that selfishness and in a way, I guess we all did as well.

We looked up at Hannah pretending to ‘claim’ herself but now that I think about it, Hannah is not inspiring. She is not the girl that we all want to be yet she’s the girl that lingers in the corners of our mind when we are free-falling through our 20s.

The recent episode of Girls which went live last Friday was a game changer. Lena Dunham, hats off to you. And I’m not the only one who thought so. Twitter was reeling with people commenting on the raw reality this episode captured.

#Girls was so good last night. It is so easy to fall into a trap. This is why we must believe those who finally speak out. #girlshbo

My stomach was in knots. Definitely one of the best episodes ever. Fantastic writing / directing / acting. #GirlsHBO @girlsHBO

We live in a world that fears talking about female sexuality. We censor it. We hide from it but it’s always there, looming in the corner. This episode was so essential in showing us that you can’t hide from it and that speaking about consent is so important.

As a writer, I think this episode struck me in a way that the others have not. When Chuck Palmer (Matthew Rhys) says that girls come to him because they need stories and experiences to write about – I get it. We all need stories. We constantly search for them; to pen down something that no one has before; a story that’s personally yours and yours alone.

I think that’s what’s changed in Girls this year – the media, ‘fake news‘, intellectual property, understanding and believing in everything you read online and yet questioning it all the same. I’m reading an article and I think to myself, “Damn, I could have written that”. I scroll through Twitter thinking, “Why didn’t I find that story?” Because at the end of the day, that’s what it’s about – the experience game – who has more and who can validate it before someone else does.

Palmer says his entire life has been destroyed by a website called Tumblr without an E. That resonates. People throw their views out into the world through Twitter, Instagram, Facebook, Tumblr, Pinterest – the list goes on. But isn’t that what free speech is all about? This episode also tackles the problems behind the rise of social media and how we constantly post things without any proof or validation.

At the same time, it also shows the importance of a single female voice. And in a country like Pakistan, we need that. One voice can get through to someone – it can change things. Girls may not be doing a whole lot this season, but for young girls living in countries like Pakistan with a lack of exposure, it’s teaching them to speak up and raise their voices beyond the metres that society binds them to.

So maybe we all won’t turn into Hannahs. Maybe we won’t be left behind at a cafe writing and mocking people we once respected and valued, re-igniting our womanhood just because we can, questioning every norm because we can. But who knows?

Maybe we already are.