Dear Saudi, their only crime was being born transgender, and that’s not a crime at all 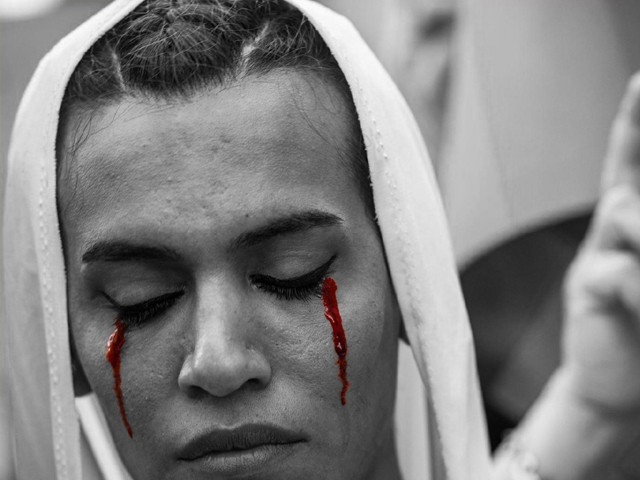 LGBT member with make up on her face attends on August 21,2016 in Istanbul a demonstration for the murdering of a transgender activist Hande Kader, a 22-year-old transgender who was mutilated, burnt and murdered in Istanbul. PHOTO: AFP

Amna, a 35-year-old from the Mingora part of Swat and 26-year-old Meeno from Peshawar were killed in Saudi Arabia this week in police custody. The death of any prisoner at the hands of law enforcement is already disturbing as it is, but these two were allegedly tortured to death. Alongside 33 others, they were arrested, placed inside sacks, and beaten, and beaten, and then beaten some more until the two succumbed to their injuries. Imagine being helpless, alone, inside a dark claustrophobic sack, and struck on the body and head with canes and kicks until dying painfully.

There is very little that would justify such a gruesome death.

Were they murderous criminals? No.

Were they terrorists who had killed others mercilessly? Wrong again.

Their crime, sadly, was a crime they had been committing since they were born in the eyes of hard-line Islamists; they belonged to the transgender community. They had offended the Wahabi-minded extremists enforcing draconian interpretations of Islam by wearing female clothes, because they gender identified as women.

Imagine being born as a transgender, enduring abuse and sexual harassment all your life, having limited education and job options throughout your life, and dying by torture at the very end of a life cut woefully short.

Transgender rights activist Qamar Naseem has been rightly left disgusted by the murder. He said,

“Torturing humans after throwing them into bags and beating them with sticks is inhumane.”

It’s difficult to believe that we are in the year 2017, and we still violently discriminate against others for their skin colour, sexual orientation, or gender identity. In Saudi Arabia, women are treated like property and retain very few rights, suffering constant human rights violations since the day they are born in the kingdom. Hence, it’s not surprising that according to various sources, transgender people have been banned from entering the country, especially from performing Umrah.

Unfortunately, Pakistan is so deeply in bed with Saudi Arabia doing it favours that it doesn’t have the guts to stand up for its citizens. After all, we have been freely taking Saudi money for generations, and it is well-documented how we’ve allowed Saudis to build madrassas across the country that preach dangerously hateful interpretations of scripture.

Naseem has been pleading with the Pakistani government to do something:

“No one is there to save them as the life of a transgender is not of any value to anyone, not even for our own government.”

Speaking to The Independent, Naseem explains how dire the situation is:

“Gender fluid people are treated badly, sometimes flogged, and if someone is arrested on the same law for a second time they can be executed.”

My question is who died and made Saudi Arabia the gatekeeper of Islam? What right does this backward family business have – one that uses extremism to manipulate its masses to stay in line while it hypocritically takes part in all sorts of debauchery – to ban anyone from entering to perform their religious obligations based simply on their gender identity?

What are transgender individuals supposed to do? If the holy Muslim cities did not exist in Saudi Arabia, no one in their right minds would ever put themselves through the torture of temporarily visiting. Saudi Arabia should realise that it does not own Islam. The crimes against humanity committed by the Saudis keep stacking up, and one day when the day of reckoning comes, the kingdom will only have itself to blame.