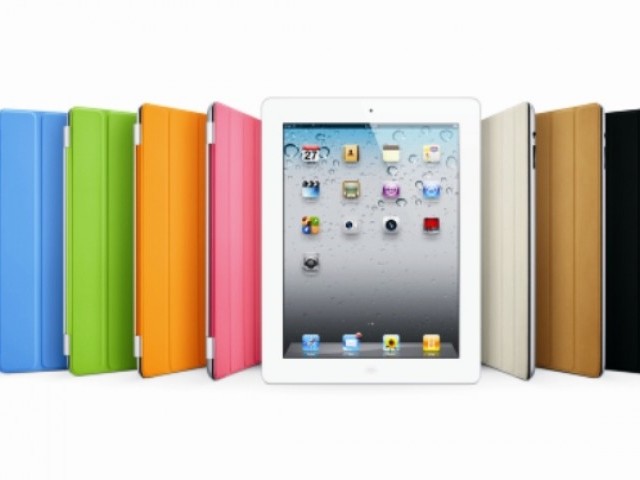 The device’s edges have also been reshaped and look much sleeker.

Since the launch of the iPad last year, various tablets have been released on the market which are more powerful than the original. But Apple was not going to sit back and watch the competition succeed. They have announced the iPad 2 – the new improved version of the revolutionary iPad.

The iPad 2 is 80 grams lighter and 33 per cent thinner than the original. So if your reason for not buying the original tablet was its size and weight, you should seriously consider the iPad 2.

The device’s edges have also been reshaped and look much sleeker. Unlike the original, the iPad 2 is available in two colours, black and white. Internationally, both colours are priced the same but in Pakistan one should expect to pay a premium for the white one.

The iPad 2 comes with two cameras which can be used with FaceTime, a video calling software developed by Apple for iPhone 4.  This was a highly anticipated feature, since the original iPad was the only Apple device without it. (This software works fine on Pakistani internet too.)

The back camera can record videos at 720p resolution at 30 fps and like all Apple products, the video quality is great and videos can be edited in the iMovies application.

Another new feature is PhotoBooth which has been ported over from MAC OS and allows you to take pictures with special effects. This software works well and can be used with both the front and back cameras.

One question that remains is whether the tablet’s size renders the cameras useless as taking pictures with the iPad will be difficult. There is always the risk of dropping and damaging it!

– The overall usage is much snappier.

– Faster internet browsing – but the lack of Flash means that we can’t rate the browser superior to the one present in many Android tablets.

The other basic apps remain unchanged. There is new software namely iOS 4.3 which adds many performance tweaks along with in-app subscriptions and support for Air Play and Air Print.

Many iFans were hoping for a retina display. They were disappointed.The display on the iPad 2 retains the same resolution as the original iPad. Apparently, we have to wait until 2014. The iPad 2 has a LED back-lit IPS panel which is not as good as the Galaxy Tab 7 due to a lower pixel density but the viewing angles are better than other tablets on the market.

As far as connectivity goes, Apple fulfills the requirements on the checklist. All iPads come with Wi-Fi, Bluetooth, Air-Play and Air-Share support. The iPad 2 goes one up by adding CDMA support.

Of course,  you have to buy a CDMA specific device which will not have data roaming. The 3G version has data roaming and can be used anywhere in the world. The HDMi-out accessory is also present but its capable has to be purchased separately.

This means that the cheapest iPad is cheaper than the rest of its competitors and provides Apple with a much larger market than its rivals. The only constraint is that you are stuck with the amount of memory you buy as there is no expansion slot. The iPad 2 has a 10 hour battery life which is the same as the original iPad.

What makes the iPad 2 truly stand out is the cover that can be purchased with it. When the iPad 2’s specs were originally announced people were not sure why there was a proximity sensor. Can it make calls? No, the proximity sensor is for the new “smart cover” Apple has made especially for the new iPad.

The cover looks like a book cover. It has a single piece back but the front has four magnets which can be customised to convert it to either a FaceTime, video player or keyboard stand.

The cover uses the proximity sensor to turn the device on when the cover is opened and to put the device to sleep when the cover is closed. It is available in plastic or leather and comes in various colours. The only problem is that the case is slightly more bulky than other covers.

The iPad 2 is a great device but not one that stands out. It merges in with the crowd of tablets and might even be eclipsed by many devices in terms of specifications.

However, the large Apple fanbase and number of iPad apps means that it will outsell its competition like the original device. While it will not be able to be a runaway hit like the original tablet which could have held its own for another year, the iPad 2 will be another hit that will enjoy a large market share.

Will the Nokia-Microsoft partnership work?