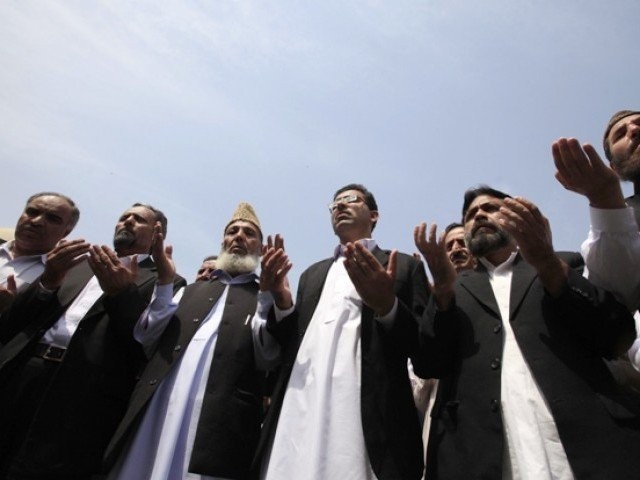 About 100 lawyer supporters of Osama bin Laden take part in a symbolic funeral prayer for the late al Qaeda leader in Peshawar May 4, 2011. PHOTO: REUTERS

According to newspaper reports, you have announced that the annual salary increments of those working in your court will be based on “how regularly they offer their prayers”. You also declared that you would lead some of the prayers yourself, ostensibly to observe which of the court’s officers offer prayers and to secretly check whether they are complying with your order or not.

Your honour, do you realise that your order violates Islam’s injunction which clearly states that there ‘should be no compulsion in Islam’ (Surah Baqarah, verse 256)? Since those who do not pray will suffer financially, you are in effect penalising them. Can you name or quote any law under which you have issued this order? Can you name any Muslim country where there is a penalty for not praying? As far as I know, even Saudi Arabia does not have such a law.

Moreover, how will you determine if your subordinates offer the morning (fajr), evening (asr), sunset (maghrib) and night (isha) prayers when they are not at work? Will you then appoint a team especially for this purpose?

Furthermore, what about the other mandatory pillars of Islam? How will you know if your officers pay zakat every year, for instance? What about those who don’t fast on weekly basis and public holidays?

Since you will also be the “imam”, what about those whose beliefs are different from yours? For instance, those who belong to other sects or sub-sects and not your own will be within their rights if they refuse to accept you as their prayer leader. It has been reported that you have been an active member and office bearer of a religious party whose members are rigid fundamentalists, and most of them do not consider people whose beliefs are different from theirs as Muslims. Under such circumstances, how can you compel Muslims of other sects or sub-sects to accept you as their prayer leader? If you or people you are associated with think they are not Muslims, why should they think that you are a Muslim?

My lord, you must have heard of the Indian national song “Vande Mataram” and how Indian Muslims, including those in Indian-occupied Kashmir, are being forced to sing it, even though it is against their beliefs as it praises the Hindu female deity Durga. What then is the difference between Hindu fanatics forcing Muslims to sing something they find utterly repugnant and you forcing your staff members to do something which is against their beliefs? Won’t the anti-Muslim Shiv Sena and RSS in India be encouraged to foist their beliefs on Indian Muslims when they hear that you are doing something similar in Pakistan?

Your honour, please remember that the basic function of courts is to provide speedy justice to the masses. Should you not direct your efforts at overlooking and passing verdicts on cases without any delays? It would be good if you could personally investigate why it takes so long for cases to be decided in your courts.

Religion and its practise is a very personal matter and it should be left at that. Won’t you please think about the repercussions your directive will have and reconsider the matter?

Sir, while appreciating your efforts to turn your subordinates into good Muslims, I respectfully suggest that you should focus your time and energy onto more important matters, such as eliminating corruption present amongst your employees and other courts (some of whom, like those working in courts in other parts of the country, are liable to be very corrupt).

If you appoint a team to check whether prayers are being offered regularly, it would be beneficial if a team is also formed to find out which of your officers and staff members are living beyond their means. By doing so, you will not be violating any law, and if your efforts do lead to corruption being eliminated in your jurisdiction, people of Azad Jammu and Kashmir (AJK) will be very grateful and will forever remember you in their prayers.