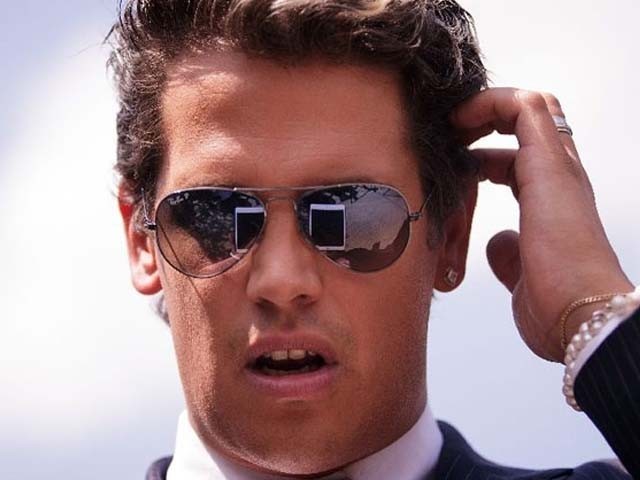 In May of 2016, Ben Shapiro resigned from Breitbart News because it was a “propaganda outlet for Donald Trump”. That same month Shapiro posted a joyous announcement on social media, saying that his wife had given birth to their second child.

With infinite gratitude to God, we're overjoyed to welcome to the world our new baby boy, who arrived at 10:30 this morning!

“Prayers to Ben who had to see his kid come out half-black. And already taller than he is!”

The Tweet included a photo of a black infant. Yiannopoulos’s supporters piled on with bile such as:

“Into the gas chamber with all four of you”.

The Twitter-storm included photo-shopped images of Shapiro and his family as lampshades, referring to the Nazi practice of using their victim’s skin for upholstery. Curiously, Yiannopoulos didn’t get banned from Twitter. Not yet.

But two months later, when he slandered Ghostbusters star Leslie Jones, Twitter did ban him. The result? Yiannopoulos’s proverbial star shot into the galaxy. His college “Dangerous Faggot Tour” went nationwide; he received a $250,000 book deal from Simon & Schuster, and appeared on Bill Maher. Campuses erupted in protests, some violent, but they only brought him more attention. In the end though, the fatal bullet didn’t come from the left but from the right after a video emerged of Yiannopoulos championing paedophilia. The Conservative Political Action Conference (CPAC) disinvited him, his book deal was rescinded, and he resigned from Breitbart.

“Hate speech is not free speech!”

They were and are wrong. Free speech includes the right to express your hatreds. To defeat the likes of Yiannopoulos, just beat him intellectually. Do not try to censor him and betray liberal tenets. A benevolent society cannot exist without free speech and without this liberty we descend into fascism. As horrible as Yiannopoulos may have been, those who sought to ban him were worse. Far worse. Let’s examine their fallacy. First we must determine the limits and nature of speech.

Censoring obscenity and content for children notwithstanding, free speech protects our right to express any idea, including what or who we hate, why, and how to confront the object of our hatred. Let’s examine three types of speech:

A. Criticism of politics, religion, or any other ideology.

B. Bigoted or tasteless attacks on individuals or groups, personal attacks, or general condemnations of race, political affiliation, religion, gender, nationality, or other prejudices.

Most of us agree that ‘A’ should be protected and ‘C’ should be illegal. The consequences for violating ‘C’ can be severe. Three members of Radio Télévision Libre des Mille Collines were given lengthy sentences by The Hague for ‘crimes against humanity’ after broadcasting the need to kill Tutsis in Rwanda. And Julius Streicher, editor of Der Stürmer, was executed at Nuremberg for speech advocating the Final Solution.

The problem lies in ‘B’ or what we consider ‘hate speech.’ For fascist governments, any criticism results in retribution. Just ask Raif Badawi’s wife and children, who must agonise in Canada as their husband and father sits in prison in Saudi Arabia because he wrote about secularism and questioned the mullahs. If you spoke your mind in Chairman Mao’s China you might be sent to the gulag. And the North Koreans cannot express their hatred of Kim Jung Un, no matter how well deserved it may be.

So what is hate speech? Should governments define it? Absolutely not. They should protect it and let the free market work out the problem. And usually it does. Yiannopoulos’s rise and fall resulted from free speech. A similar situation occurred with Professor Joy Karega, who was let go by Oberlin because of her hateful social media posts.

We have the right to push limits, and others have the right to push back. Yiannopoulos can say, “feminism is cancer,” just as Black Lives Matter co-founder Yusra Khogali can declare that “whiteness is not humxness” and “white skin is sub-humxn,” or Linda Sarour can Tweet her wish to “take” Ayaan Hirsi Ali’s “vagina away.” Their hate speech is their freedom. And as long as these people have an audience and they do not cross into inciting violence, they have a right to be heard. And we must tolerate their hatred.

For ‘hate speech’ harms society far less than the anti-free speech Orwellian cadres that populate universities and oppose diverse thought. They have gone ‘full Niemöller’:  first they went after Yiannopoulos, then they went after Ben Shapiro, then they went after folks such as the humanitarians Dave Rubin, Christina Hoff Sommers, and Paul Boghossian for exposing ‘The New Campus Thought Police’.

Let’s face it, most of us hate something or someone. Whether it’s broccoli, rush hour traffic, Trump, conservatives, liberals, terrorists, dictators, bigots, or anti-free speech fascists. I claim my right to excoriate that which I hate, and you should too.