“The media has needed Trump like a crack addict needs a hit!” 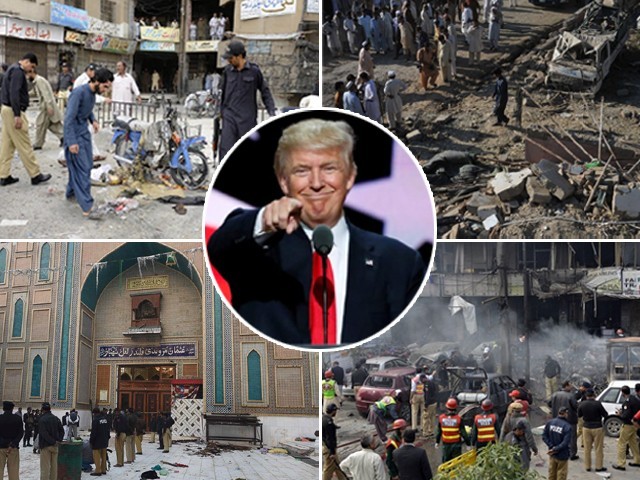 The sudden wave of repeated terrorist attacks in Pakistan which took more than a hundred lives was hardly covered in the international media.

Remember the time when Donald Trump’s chances of winning the elections were as promising as minorities in Pakistan gaining equal rights? A year ago, no one could have imagined that Trump would win the 2016 Presidential Elections. But win he did and I believe the media, in its quest for ratings, played a crucial part in mainstreaming him.

I used to be an avid reader of  The New York Times, and during election season, all I would see were stories either covering one of his many erroneous claims (in a bid for ratings), or magnanimous praises for Hillary Clinton’s “pragmatic” politics over the “idealised” politics of Bernie Sanders.

Bernie was a candidate of real substance who understood the public’s disillusion with the establishment and the general mood against the status quo. His campaign was focused on channeling that potentially dangerous disillusionment to bring about real change with constructive policies to address the inequalities that have been widening in the past decades, especially in the United States. But with the liberal media siding largely with the establishment candidate, Clinton, the doors of Trump’s presidency became wide open. The general impression of people disillusioned with establishment politics was that if the Clinton endorsing, liberal media hates Trump so much, he might not be so bad after all.

And then he won the elections, nay, swept them.

And ever since, judging from the media’s coverage, it seems not much else is happening in the world except what Trump says and does. The sudden wave of repeated terrorist attacks in Pakistan which took more than a hundred lives was hardly covered in the international media. There were no hashtags and no messages of condolences. Representatives from Al Azhar institute and the Vatican held talks in Cairo to combat religious extremism in what I would say is a remarkable inter-faith initiative. But the international media was silent.

Moreover, the Mosul offensive – a joint offensive by the Iraqi government and the international forces to retake the city of Mosul from Islamic State of Iraq and Syria (ISIS) – is at a crucial stage.  This is far from the American public’s purview, even though an American general is overseeing it and both Air Force and Marine units are participating. These are but a few examples.

However damaging Trump’s presidency may prove for America, one thing is for certain, he is godsend for the media, and the media has been milking him like anything.

“Trump is not just an instant ratings/circulation/clicks gold mine. He’s the mother lode,” says Ann Curry, a former Today anchor. “He stepped on to the presidential campaign stage precisely at a moment when the media is struggling against deep insecurities about its financial future. The truth is, the media has needed Trump like a crack addict needs a hit.”

In the face of kick-throat competition and a constant battle for ratings, the media has conveniently compromised its journalistic integrity in return for higher revenues by obsessing over Trump. And this is self-evident – turn on the TV and all the media pundits are discussing is Trump, or open up a newspaper, and you’ll find the same thing. But apart from ratings, I reckon there is another factor at play here.

Imagine you’re a reporter who is under pressure to constantly push out stories. What do you do? Tear down one of the many bogus claims and erroneous statements of Trump that everyone is talking about, or write about something else that’s going to require more research and hence more time? In short, journalists are falling short of their professional responsibilities to produce fresh, thought-provoking content in exchange for convenience.

None of this, of course, is to say that Trump doesn’t warrant our attention. He is, after all, the president of the most powerful country in the world. What he says and does has real consequences for millions of people. Yet, it is also vitally important for journalists to not lose sight of the bigger picture and fulfil their ethical and professional responsibilities to cover a multitude of events happening all over the world.

These stories may not prove to be as financially lucrative as the ones covering Trump, but then ethical journalism was never really about raking in the highest page views. It is important that journalists remember the first principle of journalism – commercial considerations should never override professional ones.