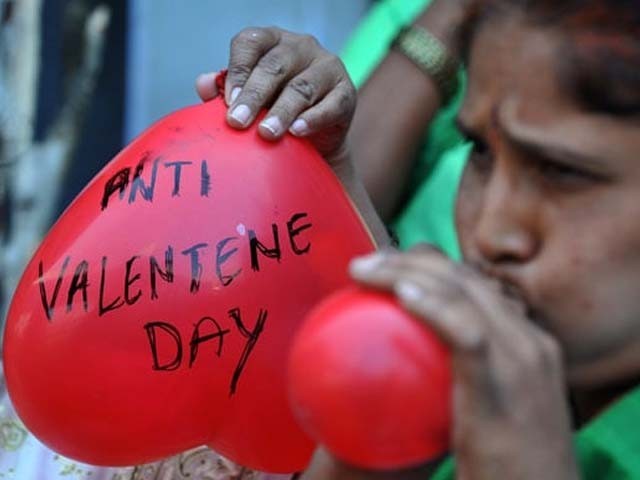 Valentine’s Day can mean whatever you want it to mean for you. PHOTO: AFP.

There were a string of terrorist attacks last week in Pakistan. On Tuesday 14, 2017, the Islami Jamiat-e-Taliba (IJT) came out in numbers vehemently protesting…Valentine’s Day.

Their creative banners included F shamelessness – it is not clear whether the F was used as a verb i.e. the protestor wants to do something vile and inappropriate to shamelessness or whether he is a teacher at the University who has failed shamelessness. The way the man is dressed in a denim shirt makes me think he got stood up on a date and decided to join the other protestors. Maybe his date heeded the advice of the protestors and said no to her valentine – frankly speaking if this was Tinder the faces of the protestors were enough to make their valentines say no to them.

Another man holds a sign rejecting the Western culture while wearing a dress shirt holding up a cardboard (invented in England in 1817). Even the text is written by a marker patented in the US in 1910. Maybe he was also protesting irony that day.

I understand the plight of some of these men. I have not had a valentine for the 10th year running. I have wanted to protest this day as much as anybody else but living in a country where you are so cognisant of your fortune just to be alive, clothed and fed every day it is hard to lament a day created for love.

All my sympathies are with the man with the green chart paper who has no love story, no Valentine’s Day, No girlfriends – hell he even has no friends! If he has no friends, at some point he has to realise that Valentine’s Day is not the problem, he needs help. Maybe he just came to the protest to make some friends: Finally a place where he belongs, one where everybody hates everyone.

He does not need a valentine, he just needs a hug. There is still hope for the preteen with the “No Love, No Valentine” sign. The sixth grader who refused his offer to share chewing gum during recess is only the first of many girls who will break his heart. He needs to get used to the heartbreak just like he got used to his teeth falling off. Unfortunately, there is no heart fairy putting money under your pillow each time your heart breaks.

Finally coming to Salman Butt, who is trying to hide his identity by growing a beard and putting on a black face to seem darker – he is standing at the edge of the large banner in the red jacket. The sign that reads “Dil ka nahee, ye deen ka mamla hay,” (It isn’t a matter of love but a matter of religion) without realising that religion is purely in the heart.

If only he had read some Bulleh Shah,

(Tear down the Mosque, tear down the temple
Tear down everything in sight
But don’t (tear down) break anyone’s heart
Because God lives there.)

If there is one thing this country really needs, it is more love – be it love for God, or love for the people of God. Why come out and protest against love? Go home, hug your family, love your children, and tell your friends how much they mean to you. Valentine’s Day can mean whatever you want it to mean for you.

It has nothing to do with your faith. It is all you. It is you that is hateful because the God I believe in talks about love. How can you then stand with a sign that says “No Love” in the name of that God?