An American Muslim veteran reflects on resisting the Muslim Ban 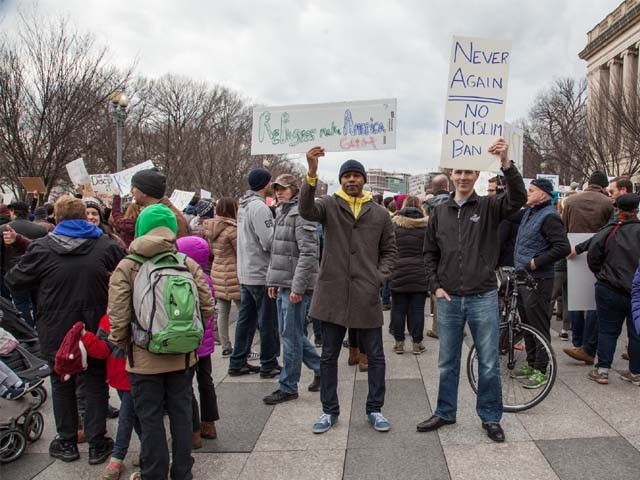 Seeing the diversity in the crowd made me fiercely proud that people of so many different backgrounds and races cared deeply about this issue. PHOTO: USMAAN Z. CHAUDHRY.

I am an American Muslim veteran. I was raised in America, and I joined the Reserve Officer Training Corps (ROTC) while in college. I followed in the footsteps of generations of men in my family who have served proudly and with distinctions in the military. Many of my family members served in the Pakistani military and were immensely proud of me when I commissioned for the US Air Force.

Loyalty to one’s country and respect for the armed forces is a part of my family’s heritage. Upon joining the military, I was proud to fight under the flag of a country that is a defender of religious freedom.

I separated from the military while Barack Obama was still president, and while I did not agree with all of his policies, I had deep respect for him as my commander-in-chief. Like many of my friends, I was shocked when Donald Trump won the election. The situation became even more surreal when he issued the “Muslim ban”. Like so many others, I was in disbelief and shock.

Having served in the military, it makes me sick that the freedom our military fights to defend and promote is being rapidly eroded. Freedom of speech is under assault, LGBT protection laws may be repealed or reduced and independent federal agencies are having their scientific studies vetted by the administration before public release to ensure it aligns with their views. Racism is rampant and children are taunted in schools: “Go back where you came from!”

The fact that Trump’s travel ban is, for all purposes, targeted at Muslims, evokes a very strange mix of emotions in me. It represents a betrayal where my own government, which I and thousands of other Muslims have fought to defend, has violated our American values. The rights I fought for in the military are now being denied to so many. While I and other American Muslims are (for now, at least) free to come and go – if I didn’t have US citizenship, I would very likely be affected by the ban as well. It is just this thin wall that stands between me and the fate of others who were stranded at airports around the world.

Knowing that our massive military and the world’s most powerful weapons are in the hands of a reactionary man unwilling to accept expert advice from those around him frightens me. It disturbs me that Trump will direct our military, my military that I am at heart, a part of. I’ve served under multiple presidents, and while I haven’t felt strong support for all of them, I’ve always had the utmost respect for them all and have been proud to serve under them.

I am a patriot, and feel an instinctive swell of pride any time I hear the national anthem playing. Upon hearing the first few notes, my automatic memory is of pausing any activity I may have been engaged in, snapping to attention, in uniform, doing a sharp heel pivot to face the nearest flag on base, and saluting till the music subsides – even though it has been almost five years since I left the military.

However, this assault on our national values makes me feel slightly guilty for my unyielding patriotism. How strange is it to feel an unwavering allegiance to a country that has taken such actions against others of my faith – a country where freedom to worship is supposed to be an unalienable right? Would this kind of betrayal and insult not outweigh or make me question my patriotism?

Despite everything, this hasn’t and won’t shake my patriotism. That is because I know the catalyst for these events is the election of a man unfit to run a country, and I will not let him affect my loyalty to America. It’s a sad reality nonetheless that such actions can make me, and others, feel this way about our country.

Therefore, the recent “Muslim ban” protest in front of the White House hit even closer to home for me than some of the other protests this year. Seeing the diversity in the crowd made me fiercely proud that people of so many different backgrounds and races cared deeply about this issue.

As both a veteran and a citizen, I felt encouraged and motivated to see my fellow Americans stand up for our human rights, just as I and my military colleagues had fought for theirs. My existing desire to resist, fight back, and stand up for our values was amplified further by others at the protest. I took a number of photos at the event, trying to capture the emotion as best I could. A few of my shots are included in this post.

The recent “Muslim ban” protest in front of the White House hit even closer to home for me.

As both a veteran and a citizen, I felt encouraged and motivated to see my fellow Americans stand up for our human rights.

My existing desire to resist, fight back, and stand up for our values was amplified further by others at the protest.

The crowd had an unexpected positive energy and vibe.

Despite the sad and disturbing circumstances prompting the need for this protest, the crowd had an unexpected positive energy and vibe. It imparted a sense of confidence, a recognition that no matter what, the people will not “go (gently) into that good night” – Dylan Thomas. Do not go gentle into that good night. Botteghe Oscure, 1951. The people will not lose their conviction, even in the face of a tyrannical president trying to change a nation that has historically sought truth and justice. People will fight him every step of the way if he continues his attempts to turn America into a police-state fuelled by propaganda and fear.

Being at the protest and watching the crowd’s fervour and zeal provided a massive shot of encouragement to me. It made me believe that no matter what this administration may throw our way; ‘the resistance’ will not lose hope, and will not back down. The thrilling decision to halt the Muslim ban that has come through the courts is indeed promising for the future of our country. I believe the checks and balances that support our democracy, and the freedom to protest that undergird it, will keep us going in the face of injustice.

The author grew up in Lahore for part of his childhood and continues to visit Pakistan to retain his strong cultural and familial roots. While in the US Air Force, he was stationed primarily in the Washington DC area and also deployed to Baghdad.